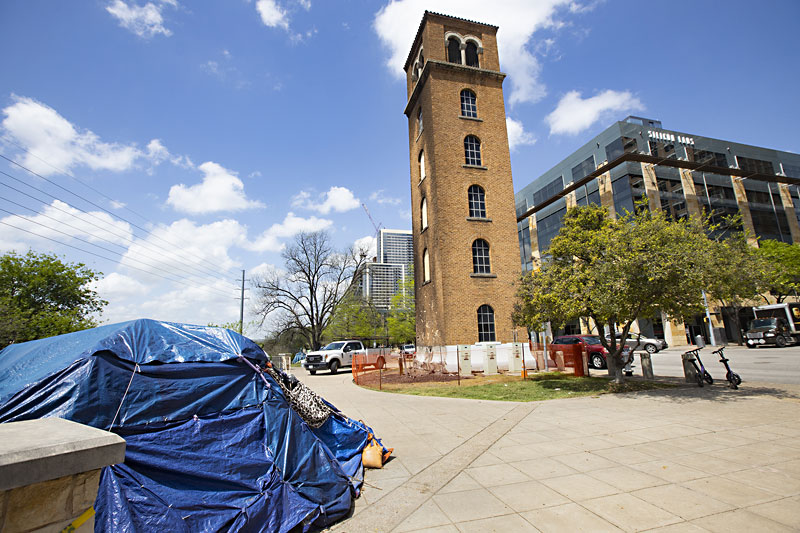 On Thursday, April 1, three fires broke out near encampments of unsheltered Austinites, stoking the conversation around the city's homelessness policies and about Proposition B on the May 1 ballot, which would reinstate the public camping ban in parts of Austin. The blaze at the iconic Buford Tower on Cesar Chavez just west of Congress, built in the 1930s and formerly a training tower for the Austin Fire Department, was ruled "incendiary" by AFD, meaning intentionally set. Hours later, a second fire ignited at the state-sanctioned Esperanza Community on U.S. 183 in Southeast Austin, and a third off South I-35.

No one was injured in any of the fires. In a Friday press conference with city officials and advocates, Chris Baker of the Other Ones Foundation said 10 people were displaced at Esperanza, their belongings burned. Mayor Steve Adler and Chas Moore of Austin Justice Coalition told reporters that Prop B could make emergencies like these more dangerous for unhoused communities. "The fact that nobody has died ... is a miracle," said Moore. "But I guarantee you that if these people are pushed back out to the furthest margins of our communities and of our city, I don't think we'll be that lucky."

Backers of Prop B used the fires as an opportunity to stump, including Gov. Greg Abbott, Sen. John Cornyn, and Council Member Mackenzie Kelly, who tweeted that camps are "unsafe, unsanitary and ridiculous ... a public safety issue." While Austin voters consider Prop B, a citizen initiative placed on the ballot by the GOP- and police union-backed Save Austin Now coalition, the Texas Legis­lat­ure is considering bills, notably House Bill 1925 (by Rep. Giovanni Capriglione, R-Southlake, with a Senate companion by Sen. Dawn Buckingham, R-Lakeway) to ban public camping statewide and give the state the power to overturn local communities' policies seeking to decriminalize homelessness.

Members of the Homes Not Handcuffs coalition opposing Prop B, as well as Foundation Communities Director Walter Moreau and members of Council, advocated at the Friday presser for housing, not criminalization. "The same voices that express discontent about the visibility of the unhoused also expressed discontent about [them] being sheltered ... in their communities. Where do you want them to go?" asked Mayor Pro Tem Natasha Harper-Madison. "The solution is not tickets and arrests. The solution is housing, housing, housing."