Lawmakers, Students Demand UT Ditch “Eyes of Texas” Once and For All

UT cannot get away 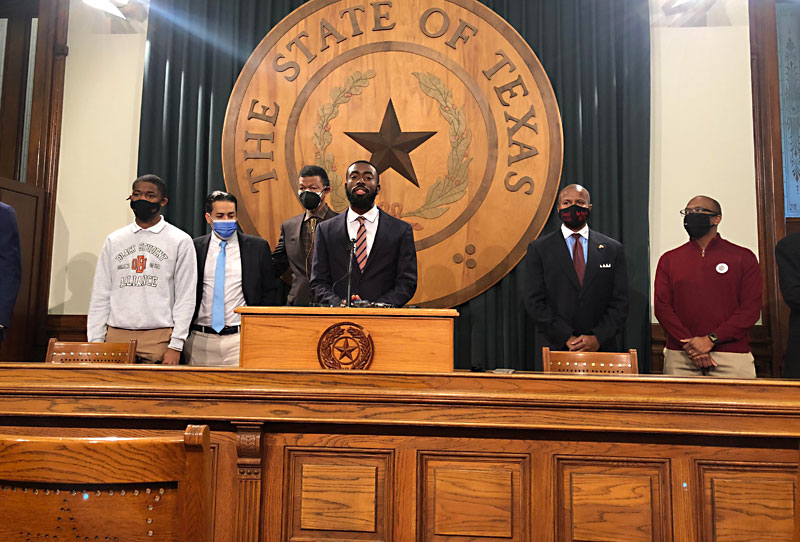 Texas Black lawmakers, civil rights leaders, and students from the University of Texas of Austin are calling on UT-Austin leadership to finally abandon the school's spirit song, "The Eyes of Texas."

On Monday, state Rep. Ron Rey­nolds, D-Missouri City, joined Texas NAACP Pres­i­dent Gary Bledsoe, Austin NAACP Pres­ident Nelson Linder, and members of the campus community to denounce UT's decision to keep the tune as its alma mater after last month's Eyes of Texas History Com­mit­tee report on the song's origins. The 58-page report, commissioned by UT in the wake of last summer's Black Lives Matter protests and calls for change from student athletes, found that the song's intent was not "overtly racist," despite its origins – debuting at a minstrel show in 1903 where white UT student-singers "almost certainly" performed in blackface – as a "painful reality."

"According to the committee report, they believe they can redefine what the song stands for by acknowledging its history," second-year Texas Law student Anthony Collier told reporters at a March 29 press conference at the Texas Capitol. "You can't redefine racism. Acknowledging racism is fine, but it's far from sufficient. It's not enough to only acknowledge racism – we must abolish racism."

“UT seems to think that because the song’s lyrics are not overtly racist, that there is no harm, no foul. ... It’s unconscionable that UT officials have not thought about the matter from the impact on Black people.” – Texas NAACP President Gary Bledsoe

Reynolds, vice chair of the Texas Legis­lative Black Caucus, said those lawmakers are "unequivocal" in their stance against the song and have asked UT President Jay Hart­zell directly to reconsider the song's fate. As of press time, Hartzell personally has not commented on Monday's press conference, but a UT spokesperson has indicated in comments to the press that the university still stands behind its report and is looking forward to working with students and other stakeholders on "improving [UT's] campus." Reynolds said he has also shared with Hartzell an independent report, authored by UT history professor Alberto Martínez in response to the History Committee's findings. The songwriter, John Lang Sinclair, is believed to have drawn his inspiration from a favorite motto of then-UT President William Prather: "The eyes of Texas are upon you." Martínez's report cites documentation to support his claim that the phrase, which UT lore holds was inspired by a similar expression used by Robert E. Lee, was instead inspired by an 1864 statement by Texas Confederate Gen. John Gregg in reference to Lee: "The eyes of General Lee are upon you." The History Committee says in its report that it found no primary sources showing the phrase's connection with the supreme commander of the Confederate army.

In Bledsoe's view, the General Lee backstory misses the whole point. "UT seems to think that because the song's lyrics are not overtly racist, that there is no harm, no foul," said Bledsoe. He emphasized that blackface minstrel shows are rooted in a history of racist derision and mockery. "It's unconscionable that UT officials have not thought about the matter from the impact on Black people." Collier added, "Racism, be it overt or covert, is unacceptable."

In addition to doing away with "The Eyes of Texas," UT's Black President's Leadership Council, a student agency providing leadership development for Black UT students, is demanding that the university make efforts to retain more Black students by allocating more scholarships and financial aid to them, creating more affordable housing, and appointing more Black professors and teachers' assistants. The council has also called on UT to institute required training on race, racism, and UT's history of racism, as well as renaming any university buildings named after racist historical figures.