Elon Musk Purchases All of Austin, Dubs Himself Iron Mayor 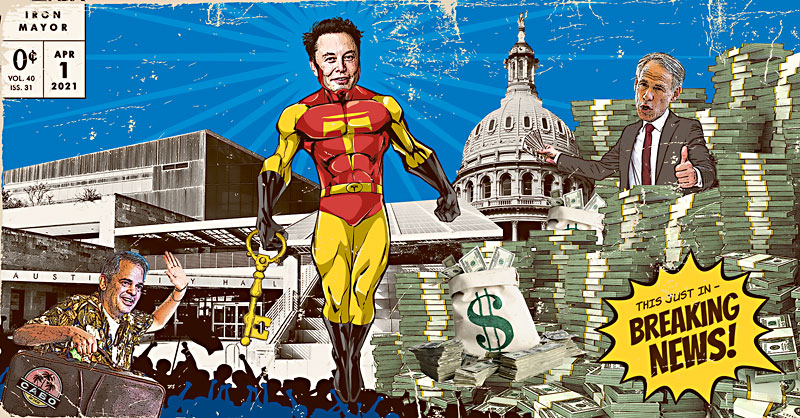 Proclaiming "an end to a century's worth of frustration and a great day for the schoolchildren of Texas," Gov. Greg Abbott signed into law today (Thursday, April 1) Senate Bill 3236, authorizing the purchase of the entire city of Austin, excepting the Capitol Complex and University of Texas campus, by area Technoking Elon Musk, henceforth to also hold the title of "Iron Mayor."

The sales price for the new city-state remains undisclosed but is thought to only represent a small fraction of Musk's $164 billion fortune, which for a time earlier this year made him the wealthiest human ever to live. The state will continue to access its seat of government and flagship university through a narrow corridor along Enfield Road, across Red Bud Isle and into the city of West Lake Hills, which will, once it approves annexing the properties – posted on its Council consent agenda for next week – become the state's new capital city.

Attempts by major Texas newspapers to force the disclosure of the terms of the sale have been consistently rebuffed by Texas Attorney General Ken Paxton, who in an appearance on the One America News Network described Musk's purchase of Austin as "fake news" even as OANN broadcast the signing ceremony live. The windfall for the cash-strapped state has been earmarked for an endowment that Comp­troller Glenn Hegar says should generate enough revenue in perpetuity to fund Texas public education, although he expressed some uncertainty about how to best manage the sum paid in cryptocurrency. "I don't even know what 'Dogecoin' is – am I saying that right?" Hegar said. "But I guess I don't have to. Anyway, it's a big number."

"This bold action secures a bright future for our state while ridding us of our most annoying constituents," Abbott said at the signing ceremony, as he adjusted his chair to keep Lt. Gov. Dan Patrick and Land Com­missioner George P. Bush out of camera range. "Texas has always stood for the proposition that partnerships with private enterprise offer the best path forward to prosperity for all our law-abiding authorized English-speaking permanently housed gun-owning faith-professing citizens."

Appearing via hologram, Musk – wearing an iron suit and seated in the bed of a Tesla Gigatruck, with his consort Claire "Grimes" Boucher and princeling X Æ A-Xii at his feet – offered cryptic remarks, including, "If there's ever a scandal about me, please call it 'Elongate,'" and, "Aspirationally acerbic alliteration -> Bullshit baffles brains." He declined to answer questions from reporters, indicating that he would say more about his future plans for Austin at an event on the social platform Clubhouse, where he would be joined by Kanye West.

“This bold action secures a bright future for our state while ridding us of our most annoying constituents.” – Gov. Greg Abbott at an April 1 signing ceremony passing ownership of the city of Austin to Technoking Elon Musk

The surprise offer by Musk encountered little resistance from members of the Texas Legislature, which quickly approved the measure by voice vote in both chambers, with only Sen. Sarah Eckhardt, D-Austin, and five Austin-based members of the Texas House indicating their opposition for the record. "I firmly believe that the people of Travis County and the state of Texas both deserve a better deal than the one offered by Elon Musk," said Eckhardt, dodging the movers sent by Patrick to box up her office and evict her from the Capitol before nightfall. "I know we will look back and regret this missed opportunity."

Other leaders expressed a more positive view, noting that Musk's move also frees Austinites from the often oppressive interventions of Abbott and the Texas Legis­lature. "Hey, we could certainly have done worse," said current Mayor Pro Tem Natasha Harper-Madison. "I mean, Elon Musk is fricking weird, but so is Greg Abbott! As long as he doesn't turn around and sell out to Amazon or Facebook, we could probably make this work."

Current Austin Mayor Steve Adler, reached en route to Cabo San Lucas for a meeting with U.S. Secretary of Transportation Pete Buttigieg and his Mexican counterpart, also expressed qualified optimism. "Running a city like Austin can be a daunting puzzle," he told the Chronicle. "Our residents expect their leaders to be innovative, to look for new ways to deliver services and maintain what makes Austin unique. Several of my friends say Austin needs a strong mayor anyway, so I don't think being ruled by an Iron Mayor Technoking who plans to live on Mars is really off-brand for us. I'm willing to spend a great deal of time coming up with ever more complicated solutions that offer a faint potential of making everyone happy, if that's what he wants. Or I can do something else."

Observing that Musk has not ruled out seeking admission of his new domain as a separate U.S. state, Texas Democratic Party Chair Gilberto Hinojosa said, "Two more blue state senators, baby!" In the past, Musk has described himself as "half Demo­crat, half Republican," and he has proposed implementing direct democracy on the model of ancient Athens in his future Mars colony. However, he has also not ruled out declaring Austin an independent nation with him as its autocrat; if so, he would become a citizen of four different countries, as well as Mars.

A coalition of community advocates opposed to Musk's takeover has organized a "We Are Not for Sale!" car parade to be held this Saturday at the Southeast Austin site of the new Tesla Gigafactory; participants are urged to "honk really loudly" as they drive past the site at 80 mph along State Highway 130. Circuit of the Americas owner Bobby Epstein offered no comment when asked about rumors that he is funding the fledgling anti-Musk resistance, but encouraged protesters to gather at his Bold Stadium afterward for Saturday's scheduled rugby match.