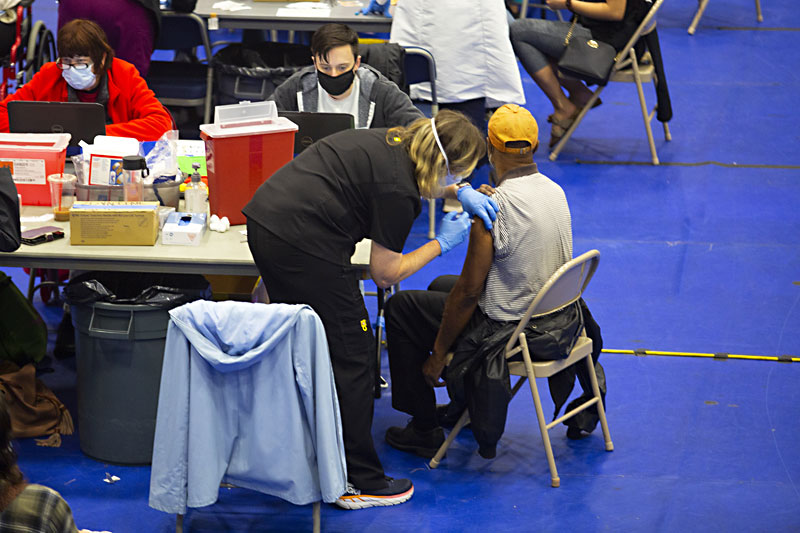 Beginning Monday, March 29, all adults in Texas will be eligible to receive the COVID-19 vaccine, according to new guidance from the Texas Department of State Health Services. Previously, eligibility was open only to select populations, including health care workers, adults age 50 and up or with underlying health conditions, teachers, school staff, and child care workers. Come Monday, people age 16 and older – regardless of occupation or underlying health conditions – will be eligible.

The announcement comes amid Texas officials' sustained assurance that large influxes of vaccine doses are on the horizon, as local providers try to anticipate the allocations they need to meet demands. As the Chronicle went to press on March 24, Austin Public Health had not said how it plans to prioritize eligible vaccine groups in light of DSHS's decision. Although APH is only one of more than 350 vaccine providers in Austin, the agency – one of Travis County's two state-designated vaccine hubs – receives the largest allocation of doses from the state (typically 12,000/week). In a March 23 joint briefing before Austin City Council and the Travis County Commissioners Court, Interim Health Authority Dr. Mark Escott emphasized that local demand continues to outpace supply as the state expands eligibility. Starting Monday, "we are still going to have to prioritize," he said. "We're going to have to focus efforts in particular areas and on particular groups to ensure that we are achieving the best public health outcome that we can."

State officials are asking vaccine providers to focus on people age 80 and older when scheduling vaccinations, in addition to prioritizing anyone in that age group who shows up to get vaccinated, whether or not they have an appointment, by immediately moving them to the front of the line. "We are closing in on 10 million doses administered in Texas, and we want to keep up the momentum as the vaccine supply increases," said Imelda Garcia, DSHS associate commissioner of laboratory and infectious disease services and the chair of the state's Expert Vaccine Allocation Panel. "As eligibility opens up, we are asking providers to continue to prioritize people who are the most at risk of severe disease, hospitalization, and death – such as older adults."

Meanwhile, APH continues to explore other vaccine strategies locally. On Monday, March 22, APH formally announced its mobile vaccine partnership with Meals on Wheels Central Texas to vaccinate homebound MOWCTX clients. Initially, the partnership will focus on clients living in Travis County's Eastern Crescent, with the partnership planned to continue weekly through April. Beginning on Tuesday, March 30, APH will also begin working with Family Eldercare to provide vaccines at the local nonprofit's residential properties for the elderly and adults with disabilities, according to APH Director Stephanie Hayden-Howard.

Some City Council members have wondered how APH plans to connect with hard-to-reach populations who might not be connected to those partners already. In the future, as more vaccine becomes available, APH's mobile vaccine program could expand to vaccinating entire households beyond just homebound patients, said APH.

As the Chronicle reported last week, City Council will take up a resolution today (March 25) sponsored by Council Member Vanessa Fuentes that directs the city manager to identify funding for a mobile vaccine program to reach Aus­tin's most vulnerable populations, including residents in the Eastern Crescent and Del Valle. At Tuesday's joint briefing, other East­ern Crescent CMs Greg Casar and Mayor Pro Tem Natasha Harper-Madison noted disparities between Eastside ZIP codes hit the hardest by the virus and the percentage of residents who've been vaccinated. "Now that it sounds like eligibility will be for all adults, I will be really interested in how we make sure the system works if we have a big flood of people come into the system – which is good, but how do we handle it?" said Casar. "And now that there is not the qualification issue, [for] those places that have had the most cases but the lowest vaccination rates, how it is that we start to really overcome that."