Unpopular No. 2 Likely to Lead APD 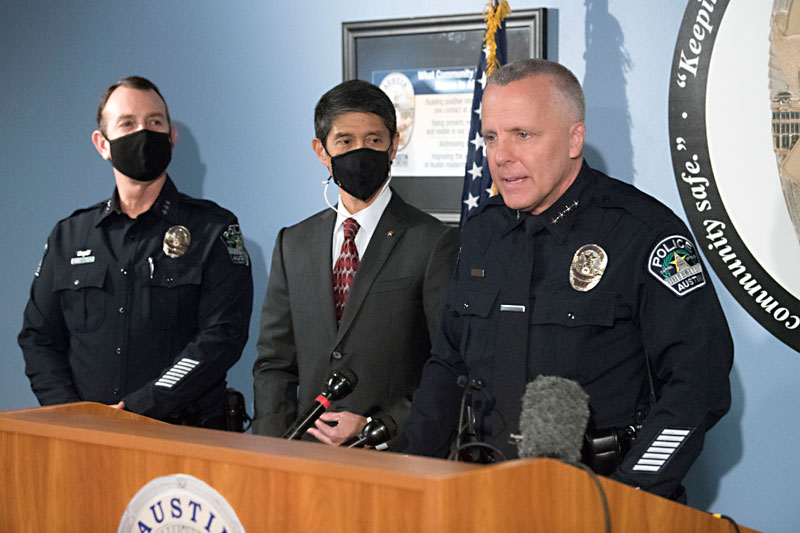 While Austin Police Department Chief of Staff Troy Gay has not yet been named interim police chief, he's already at the helm of APD while his boss, Brian Manley, uses accrued personal leave time ahead of his planned retirement on March 28. City Manager Spencer Cronk is expected to give Gay the nod – just as Manley, then chief of staff, became Art Acevedo's interim and then permanent successor – even though Gay is the least palatable option both within APD and among local justice advocates.

In a Feb. 23 open letter to City Hall, a coalition of 20 progressive justice leaders and groups writes that a "reform­-oriented Interim Chief who has not been a part of the current administration will demonstrate Austin's commitment to real change as the City conducts a national search for a permanent Chief." The signatories, including the Austin Justice Coalition, Survivor Justice Project, and Black Leaders Collective, note that the interim will have to engage with the city's Reimagining Public Safety effort while a national search identifies permanent candidates: "It is our belief that intransigence at the top of the police department is the only reason that long awaited reforms have taken so long to emerge."

Advocates give Gay low marks across the board on the issues that have galvanized the community's demands for change at APD, from racial profiling to excessive force to homelessness to marijuana to the mishandling of sexual assaults. "Gay paid a lot of lip service to reform instead of digging deeper on how to partner with advocates," local survivors' advocate Amanda Lewis told us. "He is cut from the same cloth as Brian Manley. What we need going forward is a chief that understands accountability and is willing to collaborate ... instead of finding excuses for what the department is or isn't doing."

Meanwhile, the APD rank and file don't like Gay either, viewing him as an ambitious careerist (since 2016, he's sought the top job in Waco and in Nashville) who is quick to take credit for others' ideas. He also has a reputation as a homophobe, which he denies, though allegations of bigotry were explored (but not confirmed) in last year's Tatum report on bigotry among the APD brass. Gay has 20 years of service to the department, half of it spent in leadership, and has been a close ally to Manley, so his appeal to Cronk as an interim might be self-evident.

Those seeking the opposite of that continuity have floated two alternatives, both somewhat high-profile ex-APD officers. Since leaving the department, both Fred Fletcher and Liz Donegan have been vocal about the need for reform and a racial reckoning in policing both here and across the nation. While some advocates oppose any candidate with APD experience, others see the potential Fletcher and Donegan offer as partners for progressive reforms. Even the Austin Police Association is somewhat supportive of Fletcher. "I could live with him," APA President Ken Casaday told us.

A city spokesperson told the Chronicle that "city management is actively deliberating the appointment of an interim APD chief and expects to make an announcement once a decision is reached in the near future."