For most of Austin, Winter Storm Uri is in the rearview mirror, but many residents – especially those in more than a dozen apartment complexes – are still in crisis mode. Though the weather has warmed and Austin Water has been able to resume service in most parts of town, some whose pipes burst have still not been able to get plumbing assistance. For the past month, a group of volunteers from two local unions has delivered potable water to those still going without.

United Professional Organizers, which represents many local campaign workers, shares a building on Cameron Road with the Austin Firefighters Association that became an impromptu warming center during the February freeze. As the crisis evolved to hobble the water supply, AFA President Bob Nicks and UPO organizer Romteen Farasat marshaled their respective connections to form Austin Needs Water. "We started teaming up," says Nicks. "I was taking a lot of calls from [City] Council and a couple apartment associations like BASTA [Building and Strength­ening Tenant Action], and [Farasat] was taking calls from other places, and we decided that we're running the warming shelter together, let's go ahead and do the water thing together, too."

In that first week, Farasat and Nicks were directed to apartment complexes in need by Council members from most of the city's 10 districts. In some low-income neighborhoods, says Farasat, managers "wait to get the plumbing fixed because they know the plumbing costs immediately after the storm [are] going to cost them more than like a week or two later when the demand is lower." In some cases, he says, management limited residents' access to ANW's water or hampered the volunteer efforts.

Organizers at the union hall cold-called and mass-texted numbers gleaned from voter registration data, and Austin Mutual Aid directed people asking for water to ANW. "We would prioritize locations that were both out of electricity and water," says Farasat. "Because if your electricity is out and you have an electric stove, you can't boil water." Council Member Greg Casar connected them with breweries to provide potable water, and Farasat found a seller in Dale, east of Lockhart, who donated 40 275-gallon tanks that volunteer drivers filled up at breweries and distributed to apartment complexes. Some volunteers worked 18-hour days, says Farasat, and paid for supplies out of pocket.

As the operation gained traction on social media, volunteers beyond the two unions lent resources as well: "We had a retired Texas search and rescue vehicle [operator] with a 900-gallon tank pull up," Farasat says. "He was like, 'Hey, man, I'm trying to help people and I don't know where to take it.'" Other volunteers included local "Burners" (those active in the Burning Man community) who lent their construction skills and connections. One of them, Chad Ritten­berry, logistics coordinator for ANW, says his work in festival production translated smoothly to disaster relief: "Finding solutions to a problem to help people and make the festival run smoothly ... I utilize that kind of mentality."

Once the utility's boil water notice was lifted Feb. 23, ANW moved to Dimension Gallery on Springdale Road, and firefighters brought hoses to attach to hydrants in order to fill tanks more quickly. Nicks came up with what have now been dubbed "Bob Buckets": "We took a five-gallon bucket and plumbed PVC [pipe] through the head of a spigot," creating a portable faucet. "So then we went [from a fire] hydrant, to a garden hose, to this Bob Bucket. And then we were able to drop those off to the people to give them 24/7 water by turning on a spigot." ANW was distributing around 10,000 gallons a day when it moved to its current location at the Long Center for the Per­form­ing Arts, which also housed Austin Mutual Aid's command center. 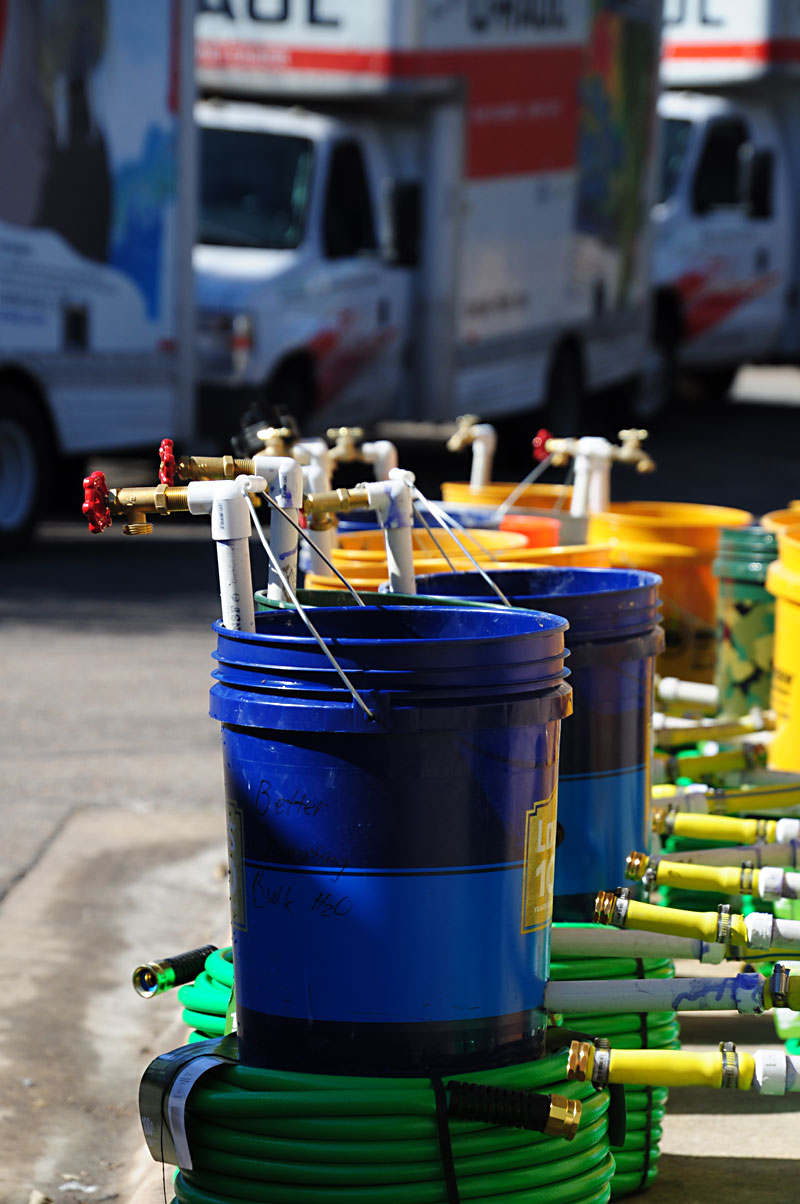 ANW’s so-called “Bob Buckets” (Photo by Jeff Maass (Courtesy of Austin Needs Water))
“I think after a while, [city staff] realized we were doing a function that it’d be very hard for them to reproduce.” — AFA President Bob Nicks

Being a volunteer organization, ANW was better able to skirt around bureaucracy than the city's own emergency personnel, who Farasat and Nicks agree were overwhelmed. "It just takes them longer right off the jump to give that initial response," says Farasat. While ANW was sharing data and resources with eight of the 10 Council offices, it was having more trouble connecting with city staff.

"It just seemed like there was a little bit of lack of situational awareness," says Nicks. "I know a person who said, 'Bob, we got 10 water distribution systems around the city, isn't that enough?' I said, 'No, man, we got a 1 million-person city and 10 places.' And I think after a while, they realized we were doing a function that it'd be very hard for them to reproduce. And then they started becoming more partners in trying to get it done."

Farasat agrees: "It seemed as though they decided, 'Why duplicate efforts?'"

Volunteers continue to knock on doors, cold-call, and field requests through social media, but it remains difficult to get an accurate picture of need. Sometimes "only a section of the complex has had its water cut off, so a volunteer might show up, and residents might be like, 'Oh, yeah, we have water here.' But they don't know that the folks on the other side of the complex don't have any," says Farasat. "We're getting mixed reporting." He adds that the need is only slowly dwindling; at Uplift Austin's relief distribution event on March 6 in South­east Austin, people were "lining up around the block for water," and as of March 12 ANW believes there are at least 17 complexes without potable water.

Although this was a temporary disaster relief measure, Farasat says it's an approach that will become increasingly necessary as the climate continues to change. "I actually have this vision to set up infrastructure for an organization to exist beyond this crisis, for emergency preparedness. We anticipate this to become a more frequent thing. It's no telling if it'll be next year or in the next five years. But I think it'll be happening a few more times in our lifetimes. There's no point in waiting until it happens to start acting."

To donate, volunteer, see a map of areas still needing water, or report your own water need, see www.austinneedswater.com.