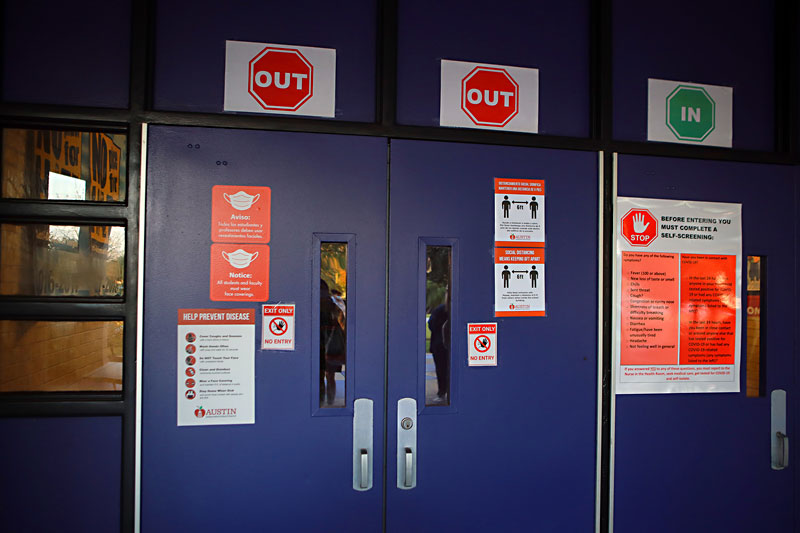 At a jam-packed information session last Thursday, the Austin ISD Board of Trustees came face to face with a slew of looming crises: dire financial projections, falling enrollment, increasing competition from charters, and a struggling special education program. Although the 2021-22 budget won't be adopted until summer, a projected $61 million shortfall has prompted a restructuring of AISD's staffing formula that could eliminate nearly 250 teaching positions.

The most ominous serving of bad news came with the financial outlook. The district is expected to end the year with $188 million in cash reserves, right around the 20% of its operating budget that board policy requires. That's after a $68 million deficit this year, in part due to COVID-19, but projected to keep moving in the wrong direction; by 2025, reserves would be well below 10%. "It is definitely not a happy read, I'm not going to lie," District 4 Trustee Kristin Ashy said at the meeting, laughing nervously. "It's a little painful to read."

Schools in AISD currently enroll around 75,000 students, nearly 6,000 fewer than before the pandemic. The district anticipates about 2,000 more students next year, once campuses are back to full-time learning, and then projects the ongoing decline in enrollment seen pre-COVID to continue. The estimates are not set in stone, as Austin is still growing at a steady clip, but local charter schools now enroll thousands of former AISD students, the vast majority of whom are Latinx. Still, although board President Geronimo Rodriguez and other trustees urged the district to expand its outreach to these families, enrollment may never recover to pre-pandemic levels.

This all provides context for the proposed new staffing formula, touted in equal parts as an equity tool and a budget measure. On its face, the formula entails eliminating about 245 positions, although annual turnover is high enough that layoffs are not expected. This would shrink the budget deficit by about $10 million. (For more than a week, the district told stakeholders to expect 200 positions to be cut, until staff did the math and realized the number would be larger.)

The new formula would simplify current funding models that allow more money for special programs; a magnet campus today might have a staffing budget 25% larger than that of a non-magnet school. In the new formula, only three numbers matter: enrollment, the fraction of students who are economically disadvantaged, and the fraction who receive special education services.

As we've reported, AISD has struggled to hire and retain staff throughout its special education programs. In the new model, those positions would have dedicated funding for the number of students served at each campus, rather than a slice of that school's overall staffing budget. For other classes, staffing funds will be allocated to achieve desired student­-teacher ratios based on grade level and a campus' test scores.

Disadvantaged students – who include, according to Superintendent Dr. Stephanie Elizalde, 73% of AISD's Black and Latinx students – draw down 20% higher funding in the new formulas than other students, meaning AISD's poorer campuses would retain or could even gain teachers, while wealthier ones would see reductions. "It's long overdue as a move in the right direction," said Vincent Tovar, an Eastside Memorial High School parent and longtime education equity advocate. "I didn't know that formula existed until yesterday, but would've advocated for changes years ago had I known."