Pressure from advocates leads to new rules – for now 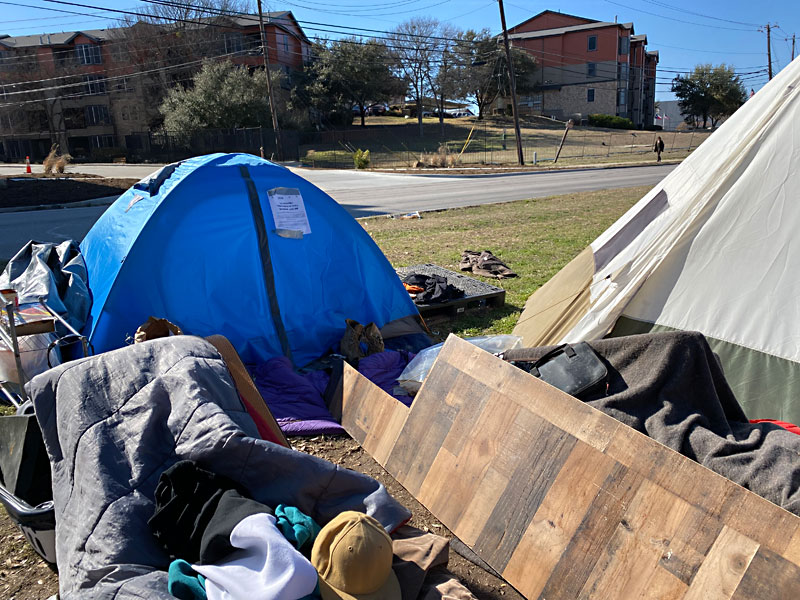 Liz Salazar, who lives at a camp on Riverside, taped a "know-your-rights" flier outside her tent. Volunteers who support camps during city-contracted cleanup efforts distributed the fliers. (Photo by Austin Sanders)

City-contracted cleanups at encampments will be carried out under modified guidelines this week, following pressure from advocates for those experiencing homelessness that they be suspended after the winter storm that devastated Austin last week. Cleanups had been scheduled to take place at 10 different camps along I-35 and in the Riverside and Pleasant Valley area on Tuesday and Thursday. Instead, crews went out Tuesday to tell camp residents the cleanups would be delayed; work under the new guidelines began Wednesday, per a city spokesperson.

"Crews will only remove obvious trash and waste from sidewalks and roadway areas," the spokesperson wrote in an email to the Chronicle. Crews will also not clean near tents "or any place where people may have been camping," the spokesperson wrote. Advocates and camp residents tell us the city contractors have sometimes thrown away personal belongings and essential items. Often, if a person is not present during a cleaning to ensure their things are secure, they could be swept up and thrown away.

With dozens of unhoused people rushed into motels by mutual aid groups last week, concerns grew over what would happen to the belongings they left behind. Liz Salazar, who has lived on the streets in the Riverside area since 2004, told us the cleanups are a hassle. She has to plan her day around them and sometimes – like Tuesday – they don't even happen. "I wanted to make sure my tent and blankets were safe, especially after the snow and ice last week," Salazar said. "So I planned to stay here today, but the crews came by in the morning to say sweeps were delayed."

With dozens of unhoused people rushed into motels by mutual aid groups last week, concerns grew over what would happen to the belongings they left behind.

City officials bristle at the term "sweeps," preferring instead to call them "cleanings" that are part of the Clean City Strategy. The spokesperson described the cleanups as meeting a "critical need" to remove waste, akin to the curbside service housed residents receive, and said, "It's the responsibility of the City to make sure public spaces are clean, including our public rights-of-way."

In 2019, before City Council voted to ease restrictions on where people could camp in public spaces, the city began contracting with an outside vendor (which in turn subcontracts with the actual crews) to conduct cleanups under 60 overpasses. Signs are posted at a camp 72 hours before the scheduled work, but when a cleanup actually happens depends on how long the previous ones take, so contractors can't give an exact time. That can be a problem for people who need to plan their days to allow time to get around on foot or by bus.

The new guidelines are only temporary; the spokesperson said the city will "monitor these locations and make a determination on what level of services are needed next week." Still, advocacy groups like Stop the Sweeps – which describes itself as a "network resisting the sweeps of homeless encampments" – are celebrating even a day's relief. "Today we stopped the sweeps," the group posted on Facebook. Their work is not done, though. "We demand a supportive, voluntary plan which includes us. Voluntary cleanup is the only option allowed in the future."