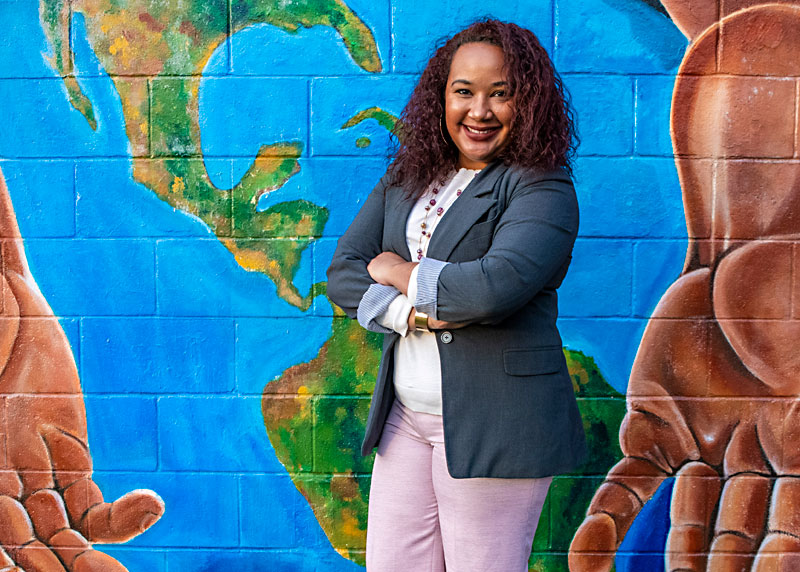 Autumn Arnett's son came home from school two years ago with news she found shocking: His teacher had told him their class wouldn't be doing anything for Black History Month. Surely, Arnett thought, the teacher doesn't mean that – the school must have some plans. After all, Windermere Ele­mentary in Pflugerville was relatively diverse, with one in five students being Black. The Arnetts had just moved to Texas from Washington, D.C., where her son's schools regularly observed the commemoration every February.

“I decided to not allow ‘We don’t know what to do, or where to start’ to be a reason for any school leader to tell me they weren’t celebrating Black History Month.” – Autumn Arnett

After Arnett asked to meet with the principal, she told us, it became clear that the school had "never considered" marking Black History Month. When she offered her help to a counselor to plan future Black history curriculum, she was asked instead to organize a step show – a one-time performance. "When we got to this year, I decided to not allow 'We don't know what to do, or where to start' to be a reason for any school leader to tell me they weren't celebrating Black History Month," Arnett said.

Arnett, an education equity advocate and writer (including in the Chronicle), worked to put together her own curriculum guide with 28 different historical Black figures and movements, one for each day, and provide it for free to parents, teachers, and schools who might want to use it. The booklet has been viewed and downloaded hundreds of times, Arnett says, and forwarded among equity-centered Facebook groups and between friends. For some parents and teachers, the diverse subjects included in the booklet and the pandemic-friendly activities offered for different grade levels have been a game-changer for their own celebrations of Black History Month.

For Keiawnna Pitts, a mother of four and member of the Round Rock Black Parents Association, the in-depth guide provided a welcome change from the "hit-or-miss" Black history education her daughters have received. Recognition of Black History Month might consist solely of one email newsletter to parents, she said, and is typically outdone by schools' productions of Kindness Week, a mid-February encouragement of random acts of kindness (as a substitute for the problematic clichés of Valentine's Day) put on by the foundation of the same name. Pitts doesn't see why both can't be celebrated: "Be kind to the people of color, the Black people that are celebrating Black history – be kind to us!"

Even when teachers discussed Black history, Pitts said, lessons had largely focused on Martin Luther King Jr. and Rosa Parks – just as they had when Pitts herself was a student. "I remember when I was growing up, that was it," Pitts said. "If we got past that, that was such a huge thing, because ... we really didn't talk about Black history."

Arnett wanted to do things differently. Although her guide is lengthy, some of the most famous figures of Black history – including King, Parks, and even Michael Jordan, Arnett's "all-time favorite" – are absent, omitted intentionally to make space for lesser-known history. In their places, Arnett wanted to highlight modern Black icons and intersectional Black identities, including radical leaders, Afro Latinx and Afro Caribbean people, queer Black people, and Black women such as Debi Thomas, listed on the curriculum as "the best Black figure skater in history." Thomas, an Olympic medalist in 1988 (and later a surgeon), was Pitts' icon growing up, a rare Black athlete in the skating competitions she loved to watch.

"Black History Month in schools is usually relegated to Black acceptance into white spaces, and it's relegated to the same 10 thinkers," Arnett said. "I wanted [my guide] to be people we don't think about ... so I try to represent folks that are not usually represented. And that's usually my approach to research and writing anyways, finding the people that are usually left out of the conversation."

Natosha Daniels, a parent and assistant principal at a Round Rock school, has never been impressed with Black history curriculum in schools. In a previous role as an instructional technology specialist in Round Rock ISD, she saw the huge variations in Black History Month curricula and decided to put together a website about local Black history and Black Austin icons, which is still used by some schools to this day.

To avoid whitewashed histories, she said, "I know that I have to teach my children at home what schools will not teach them." This includes not demonizing the Black Panther Party; both its founder, Huey P. Newton, and its free breakfast program at the Oakland Community School are featured in Arnett's curriculum guide. Daniels plans to read some of the features from the guide to her littlest child at bedtime. "I think it's super important for our children to know that our history is not just slavery and MLK, as it's often taught," Daniels said. "I think it's critical that they know that we are continuing to make history, that we have important contributions up to now."

For Brandon Lewis, a fourth-grade science teacher at KIPP Austin Connections Elementary, the guide is a way to introduce his students to Black history. In previous years, he told us, his school has never done anything to observe the month. Curious about what they knew, Lewis polled his students about the meanings of February (besides Valentine's Day) and discovered that nearly none of his students knew that February was Black History Month – the only ones who did were Black.

Lewis has gone over a different day of Arnett's curriculum every morning with his students, discussing the scenarios and people featured and inviting students to write letters to a pen pal conveying what they learned. The curriculum's modern figures, including Vice President Kamala Harris and the founders of the Black Lives Matter movement, help to keep students engaged, he said. As the only Black male teacher at his campus, he said he feels responsible for "pok[ing] the bear to get the ball rolling," hopefully encouraging his school to engage with a more formal curriculum.

"I just feel like it needs to be done," Lewis said. "It's something that needs to be taught. We teach world history. We teach other American history. This is history, too. So why not teach it?" 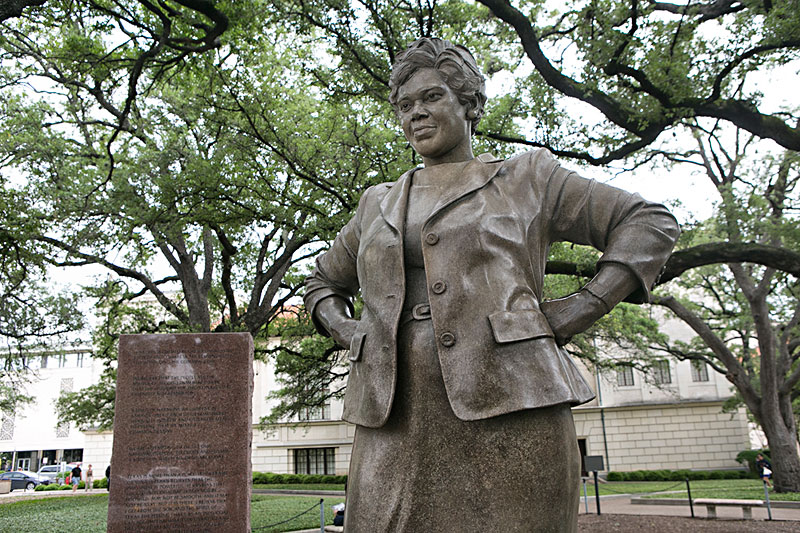 The Barbara Jordan statue at UT-Austin (Photo by Jana Birchum)

Feb. 3: Jack Johnson wins the colored heavyweight championship title on this day in 1903

Feb. 5: Barack Obama becomes the first Black president of the Harvard Law Review on this day in 1990

Feb. 6: Marcus Garvey and the "Back to Africa" movement

Feb. 9: Shirley Chisholm, first Black woman in Con­gress, and the first woman to run for president

Feb. 10: The Negro Leagues – and the Black colleges that powered them

Feb. 27: Simone Biles, the greatest gymnast in the world