Formerly friendly neighbors fall out over a gate 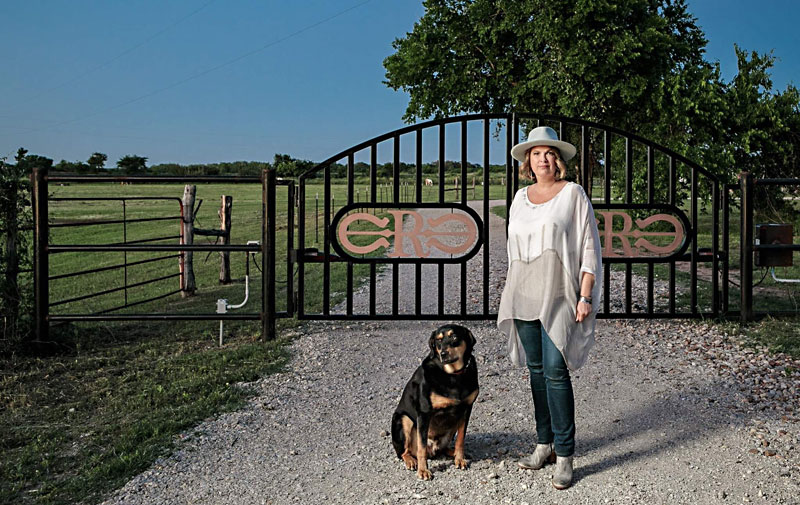 At the center of the multifaceted dispute between formerly friendly neighbors is a gate Carson Creek owner Joan Havard erected two years ago. HOPE Outdoor Gallery maintains the gate is on the art park's side of the property and has filed a $250,000 lawsuit against Havard, accusing her of trespass, defamation, libel, and business disparagement. (Photo by Rustin Gudim / Courtesy of Joan Havard)

Last Saturday, a process server drove down Sherman Road in East Austin – one of those narrow country roads without a stripe down the middle, neither big enough nor busy enough to require yellow dashes. After winding past a surface mining operation and a cattle pasture, the pavement eventually quits into a dirt lane, at last dead-ending at a pair of driveways.

The one on the right leads to a residential ranch and adjoining event grounds; the one on the left provides rear access to a forthcoming art park. The server went down the drive on the right to deliver a legal summons from the business on the left: HOPE Outdoor Gallery, whose attorney has filed a $250,000 lawsuit against Carson Creek Ranch owner Joan Havard, accusing her of trespass, defamation, libel, and business disparagement – allegations Hav­ard denies.

At the center of the multifaceted dispute is a gate that Havard erected two years ago, in February 2019, at what appears to be at the end of her driveway. She did that because two summers earlier, news articles reported that the HOG – the popular graffiti park formerly located on Baylor Street in Clarksville, west of Lamar – was moving to Carson Creek Ranch, a set of properties that is both Havard's home and a venue that hosts music festivals and other large events. While HOG was in fact moving to an adjacent property – the drive on the left – Hav­ard says people frequently drove around her property – the drive on the right – looking for the gallery. So she put up a gate.

The lawsuit filed by HOG's lawyer Nicho­las S. Bressi alleges that Havard has "committed trespass upon the property on several occasions" by erecting a gate and fencing on HOG's side of the property line and by driving across its land. "HOG contends that it owns the property upon which Havard trespassed and upon which Havard erected the gate and fencing," the suit reads. "No known motive or use for the gate or fencing are known other than the fact that Havard once told a third party that she erected the gate in order to make the property less accessible by trucks; indicating a motive harmful to HOG."

Meanwhile, Havard contends her gate doesn't impede any traffic coming in or out of what she characterizes as HOG's "illegal driveway," as it provides secondary access to the property whose address is on Dalton Lane, not Sherman Road. HOG's Creative Producer Andi Scull explained the situation to the Chronicle in an email:

"We agreed with Joan to build a fence line between our properties to support her business plans. It was when we started to build this fence line that we discovered that Joan had installed her new gate and part of her existing fence on our property. We also learned that the access point Joan uses to her property, which is not her only access point, lacks an easement over our property.

"We immediately brought this to her attention months ago so we could work together on solutions. The main reason [was] to ensure the public safety for proper traffic plans. She did not respond to us and instead posted inaccurate and false information on social media multiple times, targeting our organizations." Scull declined to answer follow-up questions, directing further communication to her legal team. Bressi's co-counsel Radney Wood later clarified that a land survey for 701 Dalton Lane revealed the issues raised in the lawsuit.

Havard maintains that Sherman Road has for more than a century provided the only legal access to her family ranch, established in 1851. While the neighboring properties she's acquired are accessible from other roadways, she says that if those parcels changed hands, her house would be landlocked, and that if she removes the gate, HOG could put up a fence blocking access.

Havard also told the Chronicle that, even if HOG's land survey is accurate and its property extends across Sherman Road, she would still have a prescriptive easement to use the road. Scull and her attorneys flatly dispute this; obtaining such an easement typically requires demonstrating to a judge that the driveway (in this case) has been in continuous and exclusive use for years.

Among the other claims made in the suit is that "Havard and/or her ranch hand have brandished firearms against persons who entered the properties at issue herein." That, Havard told us, "is a bald-faced lie. I brandished a gun last year at a rattlesnake that was about to get my cat – other than that, no."

HOG's lawsuit also asserts that Havard publicly and privately spread negative information about the gallery, the basis of its claims of defamation, libel, slander, and business disparagement. Exhibit A in the filing shows a Facebook post Havard made on Jan, 21, 2021 expressing that "HOPE Out­door Gallery, are trying to block access to my ranch," a statement the suit calls "entirely false." In addition, it characterizes a "hostile campaign" of Havard contacting investors and partners with false and defamatory claims: "Havard's disparaging remarks were the sole proximate cause of damages to HOG for which it now sues," indicating that HOG lost sizable investment because of it.

In response, Havard says, “First, it’s not libel or slander if it’s true. Secondly, I’m not being sued by the nonprofit so what board? I didn’t know there was a board for HOG Carson Creek LLC.”* According to public filing and the HOPE website, the for-profit HOG Carson Creek Property, LLC, which bought the property and is the plaintiff in the lawsuit, helps fund the gallery; Scull, considered the founder of all things HOPE, is the LLC's manager.

Until they were neighbors, Havard and Scull had been friendly; Havard transferred to HOG in 2018 her own option to buy a portion of the property, which she had acquired from its previous owner Jimmy Evans, the late excavation entrepreneur. Havard also cheered HOPE's future presence near Carson Creek as a "game changer for the arts community" in a 2017 Statesman article about HOG's relocation.

Judging from several dozen texts and emails between Harvard and Scull over the last three years that the Chronicle reviewed, plus some recent missives from the lawyers, the relationship became strained over a variety of disagreements: a contractual arrangement for HOG to fence its property that was delayed; each accusing the other of publicizing misleading location info; Hav­ard feeling that HOG improperly claimed credit on social media for a two-acre earth portrait of Beto O'Rourke for which she donated the land; and allegations that Havard towed the car of a HOG visitor. Strangely, in conversations going back to 2019, the now-contentious gate was not one of these disputes: "Your new gate entry looks beautiful!" Scull texted to Havard when it went up.

Both businesses expect a busy year. HOG's art park is scheduled to open in 2021, and Carson Creek Ranch last week received county approval for socially distanced gatherings up to 2,400 people. Havard expects to operate as a full-time venue rather than a site for festivals, and the two businesses still have a contract that allows Carson Creek Ranch to use HOG's lot for overflow parking, depending on advanced notice and availability.

Havard plans to countersue, saying she might also claim breach of contract regarding past scheduling issues over parking. In her email to the Chronicle, Scull noted: "We still have hopes of an amicable solution to the fence line and improper gate installation issue."

Editor's note: This story has been updated since publication to include Havard's direct quote about the libel accusation.