Council Plan Would Aim Help at Encampments of Unsheltered People

A time to HEAL? 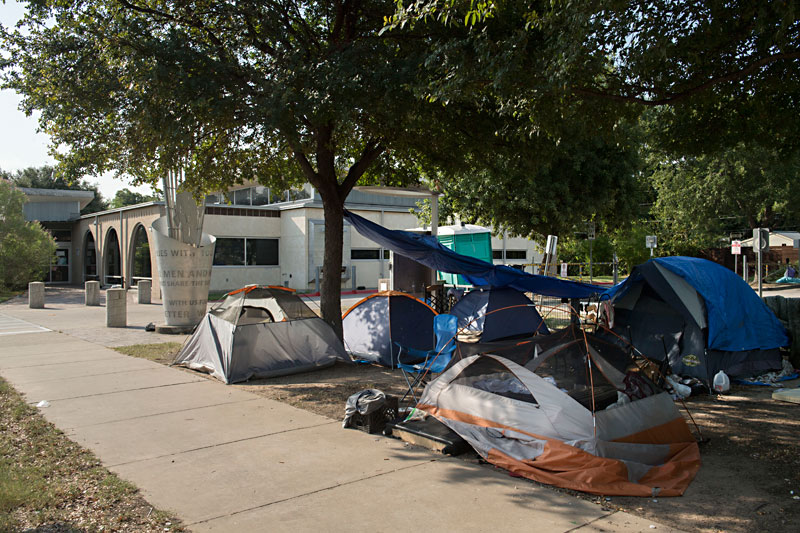 An encampment outside the Terrazas Branch Library in Pio Renteria's district; upon approval, the HEAL resolution will direct city staff to identify specific encampments for services (Photo by John Anderson)

City Council is poised to approve a resolution today, Feb. 4, introduced by Council Member Ann Kitchen, that aims to connect unsheltered people at four (unspecified) encampments with homelessness services and then prohibit public camping in those areas, all within six months.

Kitchen has described the initiative, dubbed the Housing-Focused Homeless Encamp­ment Assistance Link (HEAL), as a way for the city to act immediately to connect people with services who may be living in "unsafe and hazardous" locations, such as under highway overpasses, along sidewalks, or in public parks. (City ordinance already prohibits camping on sidewalks and in public parks, but people are not currently prevented from doing so due to U.S. Centers for Disease Control and Pre­ven­tion guidelines that discourage breaking up encampments, which could increase the spread of COVID-19.)

“HEAL is about a strategy for housing people. It’s pretty clear. The purpose is to immediately house the people in these camps and, over time, eliminate the need for public camping.” – Council Member Ann Kitchen

The HEAL resolution gives staff the task of identifying "priority encampments" but offers guidance such as: "South Central Austin, at a major intersection under a state highway overpass"; "in East Austin, on a sidewalk ... leading to a public library"; and "in Northwest Austin, at an intersection adjacent to significant vehicular and pedestrian traffic." These all point to specific large encampments, controversial among their neighbors, in the districts of Kitchen and her co-sponsors, CMs Mackenzie Kelly, Leslie Pool, and Pio Renteria; CM Alison Alter also supports the resolution and posted on the Council message board that staff should also consider an encampment located in her district.

"HEAL is about a strategy for housing people," Kitchen told the Chronicle. "It's pretty clear. The purpose is to immediately house the people in these camps and, over time, eliminate the need for public camping."

The debate over how to help people who are camping in places where it is unsafe, or where it remains prohibited under current ordinances, is a necessary one to have. Kitchen and Mayor Steve Adler also note that the broad strategy behind HEAL is not new. Following Council's vote in June 2019 to allow public camping in more parts of the city, CMs encouraged staff to explore ways of prioritizing the needs of people living in large encampments. In October 2019, Coun­cil approved a similar program known as Guided Path, which sought to house 99 people who regularly camped in front of the Austin Resource Center for the Homeless; the most recent data available shows that 18 people were housed as a result of that effort.

Since Kitchen's initial draft was posted on Jan. 22, the resolution has been revised in response to concerns from advocates for the unhoused. The latest version clarifies that whatever method is used to "disallow camping" in the HEALed locations will not rely on "policing or the issuance of citations" – that is, reinstating criminal consequences for homelessness – and that funding for these targeted efforts "will not be diverted from existing programs serving homeless individuals."

Where the $3 million in funding called for to complete Phase 1 of the resolution would come from, and how long that phase would actually take, is still undetermined. At Council's work session Tuesday, Feb. 2, Homeless Strategy Officer Dianna Grey said that some of the funding allocated to address homelessness in the current fiscal year's budget will not be fully deployed until later in the year. "We have several ideas for effective and efficient ways to utilize those dollars," Grey told Council, adding that "there are currently dollars in the [budget] for this year for the $3 million that has been identified as needed." That is, staff would be able to redirect unspent funds, should Council so decide, without reducing current services, but doing so would mean other yet-to-be-implemented strategies would go unfunded.

A similar program in 2019, known as Guided Path, sought to house 99 people who regularly camped in front of the Austin Resource Center for the Homeless; the most recent data available shows that 18 people were housed as a result of that effort.

But advocates, who are asking Council to postpone a vote on the resolution, remain skeptical. "As far as we know, there has been no engagement process with the unhoused people living in these areas," Emily Gerrick, an attorney with the Texas Fair Defense Project and member of the Homes Not Handcuffs coalition, told us. "That sort of engagement is far more necessary for something like this than it is for a motel purchase," Gerrick said, in reference to the 7-4 Council vote last week that postponed the purchase of a motel in Northwest Austin to give time for Kelly to engage with her constituents.

Advocates also point to a planned public summit of the city and its partners to discuss homelessness strategies, and feel a vote on HEAL should at least be deferred until after that. Stop the Sweeps, a group of volunteers who provide supplies and support – including during the pandemic – to people living in camps, has been especially critical of the resolution, which they see as a way of clearing out camps that have been a source of frustration for some CMs.

Emails between Kitchen's office and city staff obtained by the Chronicle give some credence to these claims. In an email sent May 19, 2020, Ken Craig, a policy advisor in Kitchen's office, asked Public Works Assist­ant Director James Snow for an update on cleanups under bridges and overpasses. "We have been getting a number of calls, particularly concerning the Ben White/290 intersections with West Gate and Pack­sad­dle/Menchaca," Craig wrote.

Snow wrote back the same day, saying that cleanups would resume in June (after being paused per the CDC's COVID-19 guidance). Craig responds: "May I assume June means early June?" The aide adds, "We've gotten a couple of reports of an apparent surge in rats in the areas. Sorry to bring that up." Snow says cleanups will resume "no later than June 15," which apparently did not satisfy Kitchen's office, because it prompted another reply from Craig, this time with Kitchen copied.

“As far as we know, there has been no engagement process with the unhoused people living in these areas.” – Emily Gerrick, Texas Fair Defense Project

"We look forward to getting the schedule and getting everything back on track," Craig wrote. "The accumulation of trash along with what seems to be a greater number of people in the locations makes it appear to some as though the situation has deteriorated even more than it has." He expresses concern that because cleanups have been delayed, initial sites would take longer to clean once the work resumes. He also mentions "many differing and often conflicting accounts" of procedures in place to guide cleanups carried out by subcontractors, perhaps a reference to reports that some in the camps had their belongings thrown away without their consent, including an open package of water bottles.

The email chain was forwarded to then­-Assistant City Manager Chris Shorter, who oversaw homelessness strategies (he's since become city administrator in Baltimore). Kitchen wrote to Shorter that she had "no concerns" with Snow's job performance but wanted to know why cleanups were suspended, because "we have concerns about the accumulation of trash." Shorter's response loops in more city executives, including Austin Resource Recovery Dir­ect­or Ken Snipes, who explains that cleanups were paused "due to safety concerns and logistics issues" stemming from the pandemic. Jason Alexander, assistant to City Manager Spencer Cronk, also responded that Alter's office has also been concerned about paused cleanups, specifically at underpasses along Highway 183.

"In these emails, Kitchen displays offensive callousness toward the residents of her district subject to city-sponsored sweeps," a spokesperson for Stop the Sweeps told us, noting that residents in encampments have long asked for more adequate trash collection service. "She doesn't cite any concrete public health risk posed by camps, yet considers spreading COVID via sweeps a reasonable risk toward pursuing her goal of making unhoused people invisible."

Kitchen vehemently disagreed, telling us of the emails, "I care about people and I think HEAL demonstrates that I am acting on those goals. We're talking about housing and services that provide a path to permanent housing; this is not about moving people from one place to another, because that doesn't help."

If passed, Kitchen's resolution would require staff to return to Council with an implementation plan for Phase 1 of HEAL no later than the March 4 meeting.