Austin Begins to Descend – Again – From a COVID Surge Peak

Steady as the COVID goes 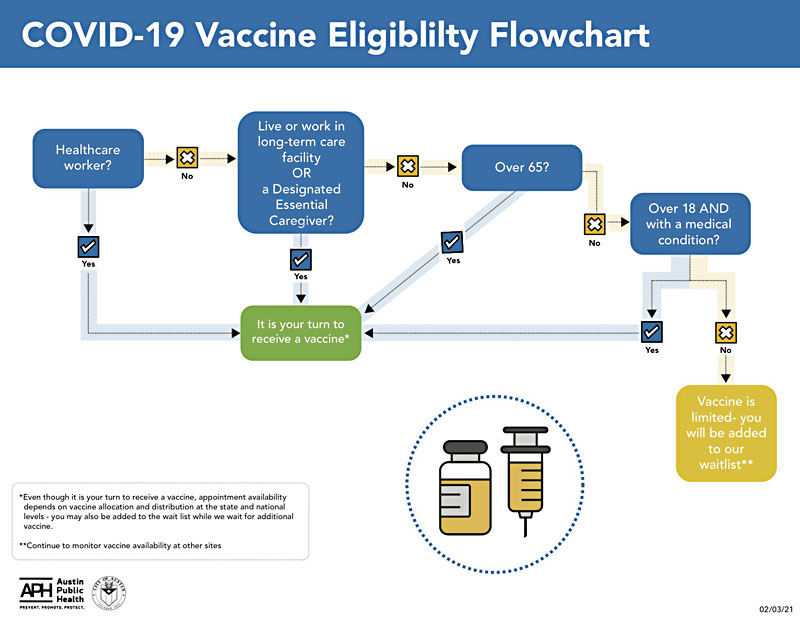 As the days grow longer, so does the time elapsed since Austin Public Health last reported all-time highs for COVID-19 key metrics.

Interim Health Authority Dr. Mark Escott's joint briefing to Austin City Council and the Travis County Commissioners Court on Tuesday, Feb. 2, came about two weeks after the Austin area reached peaks in new cases and hospitalizations, according to APH data. Although the decline in the seven-day moving average for hospital admissions has been slower than what we experienced on the tail end of last summer's surge, that key indicator for APH's risk staging last peaked 25 days ago. It's been almost a week since the Central Texas trauma service area, or TSA-O, lifted capacity restrictions on most businesses that were triggered when COVID cases exceeded 15% of regional hospital capacity for seven days, a milestone reached in early January.

According to UT-Austin's COVID-19 Modeling Consorti­um, Austin's daily hospital admissions could drop below 60 as soon as Feb. 18. At that point, Escott told city and county officials, Austin could consider returning local risk guidelines to Stage 4. Consortium modeling suggests hospitalizations and intensive-care use will follow the same path, but that's only if the public remains committed to protective action, reminded Escott. "If we continue to stay home when we can and we continue to limit our interactions with other folks, it will help to drop this quicker."

Against the backdrop of improving numbers, APH continues to build out its vaccination strategy. As one of Travis County's designated vaccine hubs, the agency was again allocated 12,000 doses this week by the Texas Department of State Health Services. Vaccine eligibility in Texas is still only open to those in phases 1a and 1b – health care workers, and adults 65 years old and older or with certain qualifying medical conditions – but APH Director Stephanie Hayden-Howard said APH is working to improve the vaccine process for the most vulnerable or oldest of those who qualify.

Under state guidance, vaccine providers in Texas are prohibited from prioritizing distribution among populations within the same phase; an effort to do so in Dallas blew up in threatened legal action from the state and from county residents. Instead, APH's strategy is to send those Phase 1b individuals in its vaccine registration system who, based on data they've provided, may be most vulnerable – particularly those 80 and older – a reminder email two hours before vaccine appointments open for sign-ups every Tuesday and Thurs­day. They don't get to cut the line, just the extra heads-up.

As illustrated in APH's recently released flowchart (see below), about 35% of those registered in the agency's system – nearly 189,000 individuals – currently qualify for Phase 1b vaccination. At the current weekly allocation of 12,000 doses, assuming all of those are administered, it will be Memorial Day before just that high-risk group is fully vaccinated.

A version of this article appeared in print on February 5, 2021 with the headline: Steady As the COVID Goes