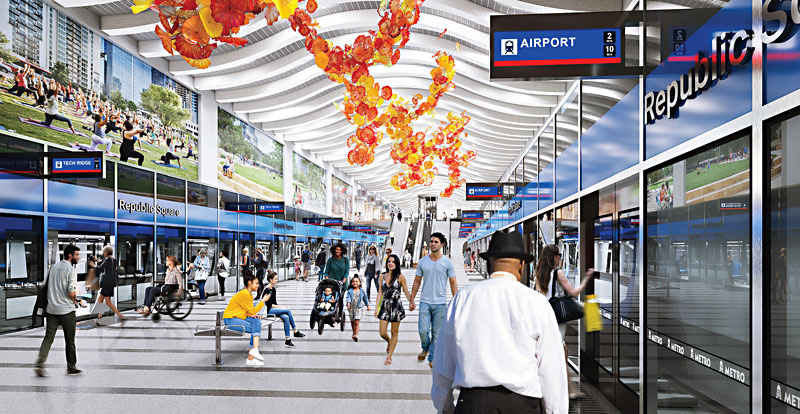 From Election Day on Nov. 3 to Inaug­u­ra­tion Day on Jan. 20, the transition to a new era of federal government was as traumatic as any in our nation's history. During that exact same time frame, the best news Austin took away from election night – the resounding victory of the Project Connect transit plan – has been quietly nurtured through its transition from ballot measure to actual agency, culminating with the inaugural board meeting of the Austin Transit Partnership, right as President Biden finished his speech.

The ATP is the new entity, created by the city of Austin and Capital Metro via an interlocal agreement, that will oversee the bulk of the project delivery for the big pieces of Project Connect – the Orange Line and Blue Line routes to be served by light rail, the maintenance facility they'll need to operate (location TBD), and the Down­town transit tunnel and underground stations serving both lines at the Convention Center and Republic Square (see rendering above). Other components of the $7.1 billion Project Connect "initial investment" approved by city voters as Proposition A (an earmarked property tax increase), such as the future Green Line commuter rail service to the Eastern Crescent and regional park-and-rides, will also be future ATP projects.

The baby agency's proud parents have their own work to do going forward. The city will manage the largest-in-the-nation $300 million anti-displacement fund that will seek to create and preserve affordable housing along the new transit corridors, so the Austinites who'd benefit the most from reliable transit won't all be priced out of the neighborhoods served by the shiny new system. And Capital Metro will continue to operate and build out Austin's bus network (including multiple new MetroRapid lines), deploy new routes for its Pickup neighborhood circulator service, and expand the MetroRail Red Line with more vehicles and stations serving Austin FC's Q2 Stadium and the Broadmoor development, both near the Domain.

Cap Metro President/CEO Randy Clarke is ATP's new executive director (as specified by the nascent corporation's just­-approved bylaws); former Downtown Austin Alliance general counsel Casey Burack and the city's deputy chief financial officer, Greg Canally, are moving over to similar roles at the ATP. Austin Mayor Steve Adler and Cap Metro board member Eric Stratton represent the two parents on the new board. The other three community members, each appointed to bring particular areas of expertise to the ATP as it launches, include architect Veronica Castro de Barrera (elected chair at the Jan. 20 meeting), Huston-Tillot­son University President Dr. Colette Pierce Burdette (elected vice chair), and financial consultant Tony Elkins. The few discordant notes that were heard during the ATP's formation mostly concerned this insider-y starter set (Castro has worked on multiple design projects for Cap Metro, while Elkins managed public/private partnership deals for Cintra, the Spanish construction group that helped build SH 130). That is partly by design to ease the agency's learning curve, but the city, Cap Metro, and the advocates (such as the Austin Justice Coa­li­tion) who helped push Proposition A across the finish line have acknowledged, and will not be able to long avoid, calls for a wider range of community stakeholders to have seats at the table during this massive build-out.

An envisioned Community Advisory Com­mittee, to be named in coming weeks, would help shape the specific anti-displacement strategies, and also the economic stimulus and job creation that $7.1 billion will buy. It also will serve as a component of the federally required NEPA environmental review process, for which public scoping meetings kicked off (virtually) this week. That will, according to plan, help Austin draw down 45% of project costs from federal transportation dollars, now overseen by 2020 breakout star and Austin mayoral BFF Pete Buttigieg, who will replace Mitch McConnell's wife Elaine Chao in the Biden administration. Until Mayor Pete makes it rain, the ATP's budget will come from the city taxes approved in November and Cap Metro's sales tax revenue; for fiscal year 2021, it's a 70-30 split between those for just over $200 million in revenue, more than half of which is going straight into reserves; much of the rest goes back to Cap Metro for administrative support, although the ATP expects to hire up to 35 employees this year. One of them, just announced, is Peter Mullan, who's departing his post as CEO of Waterloo Greenway to oversee architecture and design for Project Connect.