City Hall Looks at Retracing Its Steps on Homelessness

Back up, try again 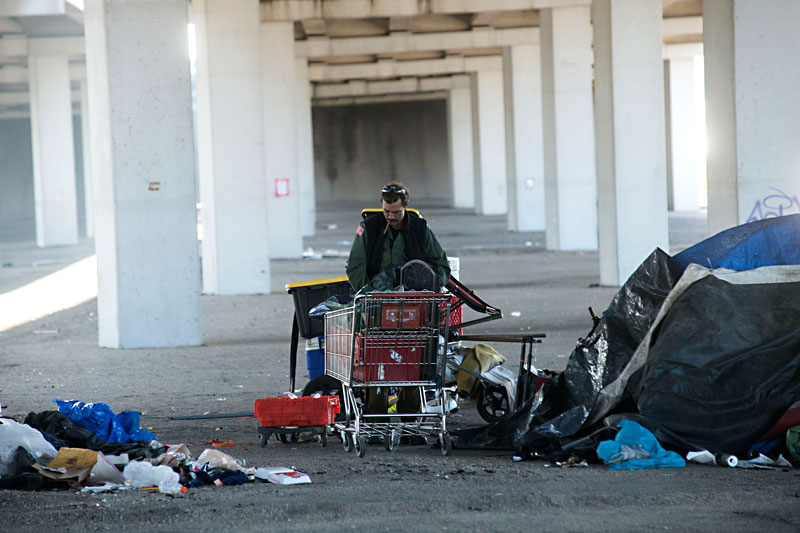 Homeless campers remove their belongings ahead of a cleanup by TXDoT at Hwy. 183 and Burnet Rd. on Nov. 4, 2019 (photo by John Anderson)

It's been less than two years since City Council made major changes in how Austin responds to homelessness, in part by eliminating criminal penalties for sleeping or camping in public. After months of volatile community discord, attacks from Gov. Greg Abbott and other Texas Republicans, sluggish efforts to ramp up services and strategies to end homelessness in Austin, and contentious Council elections last year – with another hot-button referendum likely in May – calls to retreat and regroup are increasing in volume at City Hall.

During a Council briefing by Dianna Grey, the city's new homeless strategy officer, at the Jan. 25 work session, discussion turned toward the prospects of designating sanctioned camping areas for the unhoused – and, by implication, reinstating the camping ban elsewhere. This idea was considered, but not adopted, as part of the city homelessness strategy in 2019; a staff memo at the time concluded that while politically appealing, sanctioned camps "have little impact on reducing homelessness." Abbott established his own camp on state-owned property in Southeast Austin, now known as Camp Esperanza.

Now, Council Members Alison Alter, Paige Ellis, and Pio Renteria and Mayor Steve Adler are all interested in exploring the option of creating designated camps. "Nothing is off the table at present," Grey told Council, "so long as we are holding to our values about respecting the rights of these neighbors, and that our intent is to provide housing." Alter, despite not voting to lift the camping ban in 2019, only narrowly escaped defeat in her reelection bid last month. "We are at a different point in time" with regard to unsheltered homelessness, Alter said at the work session, and "it's important to reassess."

Alter's colleague Jimmy Flannigan did not survive last month's run-off, as new CM Mackenzie Kelly ran hard against the city's homelessness strategy as a supporter of GOP-aligned Save Austin Now. That group last week resubmitted its petition to put Council's revised homelessness ordinances to the voters; its prior attempt last August (to be on the November ballot) was ruled insufficient by City Clerk Jannette Goodall, based on checking the validity of a sample of SAN's signatures.

Although SAN has filed suit against the city challenging that ruling, it's also turned in updated petitions and is likely to clear the 20,000- signature threshold this time. In turn, SAN is also facing a complaint filed with the city's Ethics Review Commission that it raised and spent money illegally to collect the signatures; the ERC held a preliminary hearing last week that raised further questions. Both the final ERC hearing and the final decision on ballot language for a May referendum (alongside the charter amendment package to create a strong mayor government, among other things, which Goodall validated this week) would take place in mid-February.

Council also has the option of adopting SAN's proposed revisions (i.e., going back to the pre-2019 statute) in lieu of an election. In an interview with the Chronicle this week, Adler said returning to the pre-2019 status quo was the "worst possible thing we could do," but that the city needs to do a better job now of managing the public spaces that have become encampments, which may require reinstating some restrictions. That may be essential, he told us, to gain political support from housed neighbors for permanent supportive housing throughout the city, where the unsheltered poor could exit homelessness for good. "I think that is exactly the kind of trade-off that needs to happen community­wide," Adler said.

Adler's faith was put to the test Wednes­day, Jan. 27, as the Chronicle went to press and Council heard public testimony on two motel purchases that would ultimately add 148 PSH units to the city's housing stock (read more). One, located in District 7, has the support of CM Leslie Pool; the other is in Kelly's District 6, and she prevailed on a 7-4 vote to postpone the item for one week to allow for more community input, though she said she personally supports the project and just needs time to explain it to constituents.

Earlier in the week, she tweeted a photo standing with constituents opposing the project. One carried a sign reading, "Not on my dime, I pay taxes."