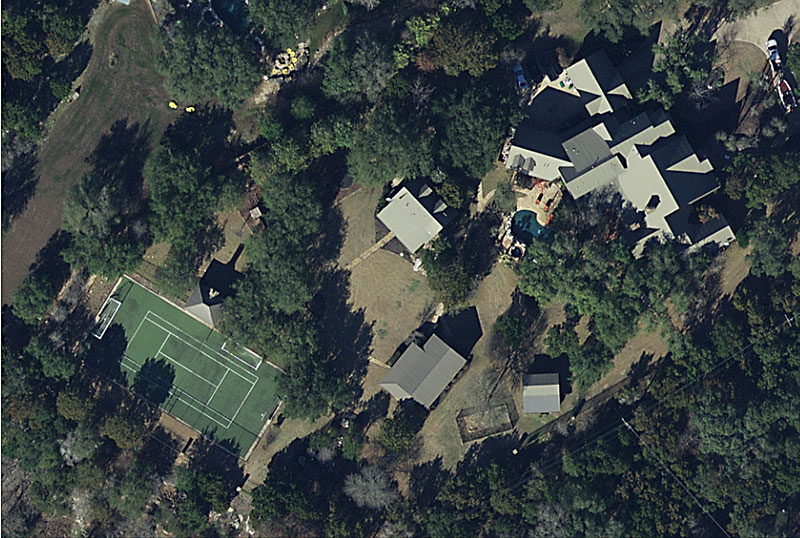 One of the homes Robbins has identified as receiving discounts through Austin Energy's Customer Assistance Program, which is intended to assist low-income customers (note the private tennis court) (Courtesy of Paul Robbins)

Editor's note: This story has been updated since publication with additional information provided by Austin Energy.

Last Thursday, Paul Robbins, a longtime local consumer advocate and environmental activist, filed a complaint with the Office of the City Auditor over Austin Energy's $18 million Customer Assistance Program (CAP) discounts – designed to help lower-income customers with utility bills but in practice, he alleges, still being offered to owners of some very expensive properties.

Robbins has been tracking this issue since 2014, when he began comparing customers who got the CAP discount against the property values assessed by the appraisal districts in Travis and Williamson counties. "I found over 1,100 [homes] that had very high appraised values, and appraisal values are usually well below real values," he said. These included homes near Mt. Bonnell and in West Lake Hills with pools, spas, and tennis courts, all receiving the basic CAP discount, which was 10% then and is now 15% due to COVID-19 relief measures. After Robbins first raised the issue, the rate­payer­-owned utility adjusted the CAP eligibility structure in 2017. Three years later, his concerns persist, and Robbins is back with a 37-page report.

Austin Energy manages billing for all city utilities and tracks customer eligibility for a CAP discount. Customers are enrolled automatically if an individual in the home is a recipient of one of seven social service programs, such as Medicaid or SNAP. Not all of those services offered by these programs are income-restricted; Medicaid, for example, pays for much long-term care, including in-home health care, for seniors. But most are, and the income verification that's already been conducted for their recipients is used as grounds for CAP eligibility.

Austin Energy says that CAP is a national model for ensuring that those who need assistance have access to it, but Robbins frames it differently. "The theory is that some people wouldn't know about the program ... [With automatic enrollment] it's reaching a qualified person and they're getting the assistance they need," explains Robbins. "The problem with this theory is that it's too wide a sweep. ... The computer is making this erroneous assumption that if the person qualifies for the program, then the home itself must be poor, and that is not always the case." The utility says determinations are reviewed by AE staff monthly as the program recipient list is matched with customer accounts.

In 2017, after Robbins published a report through his website (the Austin Environ­ment­al Directory, which he has edited since 1995) – "after I bellowed like a wounded water buffalo for three years" – eligibility guidelines were tightened: If a customer's home has an improvement value over $250,000 (the structures on the land but not the land itself) or if they own two or more properties, they must then prove that their annual income is less than 200% of the federal poverty guidelines (that's roughly $25,000 for one person, or $53,000 for a family of four). Robbins' chief question for the auditor is how AE determines customers are income-restricted, given their apparent wealth in real estate assets. The utility says that, even before the income limit of 200% of poverty was instituted, CAP accounts were matched against the appraisal rolls, and that the criteria used by its third-party validation of CAP customer income are available on its website

Paul Robbins’ chief question for the auditor is how Austin Energy determines customers are income-restricted, given their apparent wealth in real estate assets.

In his six years of digging into the CAP system, Robbins says he has identified many more loopholes and inefficiencies, which he outlines in his complaint with OCA. Chief among them is that CAP eligibility is unlinked to AE's progressive residential electric rate structure, which has five tiers; the high-usage customers (for example, the large mansions Robbins calls out in his report) pay more than the lower tiers. Ideally, Robbins says, "This does two things: It incentivizes conservation and simultaneously helps the poor, who use less energy on an average basis. But some people on CAP do use electricity in these higher tiers." His complaint cites data from 2015 in which 21% of customers with CAP discounts were fourth- and fifth-tier energy users.

Robbins also questions AE's use of funds allocated for customer assistance (an amount set by Council with each year's budget) for free weatherization for lower­-income homeowners. "If they're not using a lot of energy to begin with, then ... you're investing in a home that isn't going to save a whole lot of money, [and] it conserves a tiny amount of energy." In 2019, $1 million went to weatherization; Robbins says if that money were used to expand the CAP discount, it could help more people as well as conserve more energy.

Though each of the six points in his complaint proposes a different way in which he thinks CAP funding could be better used, Robbins says that more stringent income qualification would solve a lot of these issues. "That would be the most important to me, because I wouldn't have to continue to do this kind of citizens' audit year after year and keep finding wealthy homes on the rolls." Of the top 10 major public utilities with discount programs – cities such as Los Angeles, Nashville, San Antonio, and Seattle – he says Austin is one of only two (along with New York's Long Island Power Authority) that still relies on automatic enrollment. "If even 10% of CAP funds are being given to the wrong people, it could amount to almost $2 million in wasted funds that could be rerouted to customers with legitimate needs if income qualification were to completely replace automatic enrollment."

In response, AE's Jerry Galvan, vice president of customer care services, said, "The programs [that] get our customers automatically enrolled have their own income-verification programs already in place," and that the second verification process established in 2017 has "helped us catch unintended consequences, like a foster­-care child being adopted into a well-off family, or a senior citizen moving in with a wealthy family member. Efforts to refine screening processes are ongoing, but we believe that nearly all the customers receiving the CAP discount meet eligibility criteria."

In the report, Robbins details the multiple instances in which AE has refused to provide information, or provided it after much delay, over the past six years. (Under the state statues that control Texas' competitive retail electricity market, Austin Energy and other public utilities operate under different public-information rules than do other city departments. They are also allowed to charge fees to recover the cost of information requests, which, an AE spokesperson tells the Chronicle, Robbins has declined to pay.) That's why he's taken this step: "They can stay up nights trying to figure out ways to keep public information from me, but they can't do that to the auditor."

A version of this article appeared in print on January 29, 2021 with the headline: Austin Energy Still Hasn’t Fixed Problems With Utility Bill Discounts on Expensive Homes