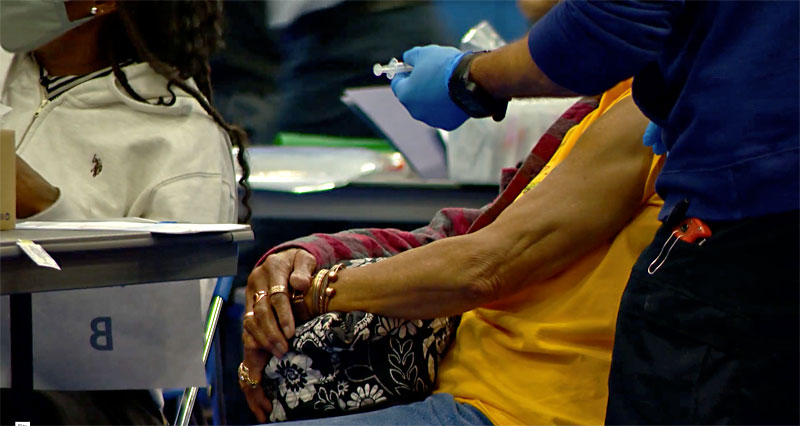 Has the pandemic reached its peak in Austin? The city's COVID-19 forecast has improved in recent days, but the disease remains unpredictable given the wide variations in vaccine distribution and in the public's behaviors.

Over the last three weeks, the metrics tracked by Austin Public Health to gauge the course of the pandemic – new COVID-19 cases and hospitalizations, and the rate at which tests come back positive – have started to decrease from their all-time peaks earlier this month. On Monday, Jan. 25, APH recorded 544 new cases, less than half of the peak of 1,108 confirmed cases attained on Jan. 14. Austin's seven-­day moving average for hospital admissions stood at 77 as of Jan. 26; it had topped out at 94 in early January.

"What we're seeing is that folks are changing behavior; folks are wearing masks; folks are staying home, and that is resulting in these decreased cases," said Interim Health Authority Dr. Mark Escott in a joint briefing to Austin City Council and Travis County Commis­sion­ers Court on Tuesday, Jan. 26. Escott added that APH did not see the surge after New Year celebrations that it had expected, which he attributed to the city and county's limitations on restaurant dining and bar occupancy over the holiday weekend – even though those restrictions were ultimately overturned by the Texas Supreme Court.

Despite the improving metrics, Austin remains in its most dangerous stretch of the pandemic to date; hospitalizations are now at the same level seen in the first surge last summer, when APH was on high alert to avoid overwhelming area hospitals. COVID-19 patients now account for less than 15% of the Central Texas region's hospital patient census for the first time in almost three weeks, while other Texas metros are still above that threshold, which triggers increased restrictions under Gov. Greg Abbott's emergency orders. Escott said offering relief to those other areas is one reason why the capacity at the field hospital in the Austin Convention Center was increased this week, to 50 patients.

Meanwhile, a limited number of providers with limited supplies of vaccines continues to race against the clock to reach as many people as possible. As one of Travis County's state-designated vaccine hubs, APH got another 12,000 doses this week from the Texas Depart­ment of State Health Services. Prior to that, the agency had vaccinated 24,000 people – or 2% of the county population – in the last two weeks, APH Director Stephanie Hayden-Howard told Council members and commissioners on Tuesday.

Escott agreed with the elected officials' concerns that current vaccine supplies won't allow for more aggressive vaccination efforts. He said those would most likely depend on the U.S. Food and Drug Administration's pending approval of two more vaccines, from Johnson & Johnson and AstraZeneca, sometime in the next two months. "Until then," said Escott, "we shouldn't expect to see huge increases in the supply chain of the two existing [Pfizer and Moderna] vaccines."

Hayden-Howard said APH is working with outside consultants to explore mass vaccination strategies, which could include drive-through sites that could vaccinate 200-300 people an hour, as well as in-home vaccination for the elderly once the city and county drop back to Stage 4 of local risk guidelines. Beginning this week, she said, APH is sending out surveys to local childcare providers to better gauge who qualifies for vaccination now. "The children that they're working with typically are not wearing masks, [and] they're in very close proximity to the children and so that is an area of concern at this time."

A version of this article appeared in print on January 29, 2021 with the headline: Amid Improving Numbers, Austin’s COVID Crystal Ball Still Cloudy