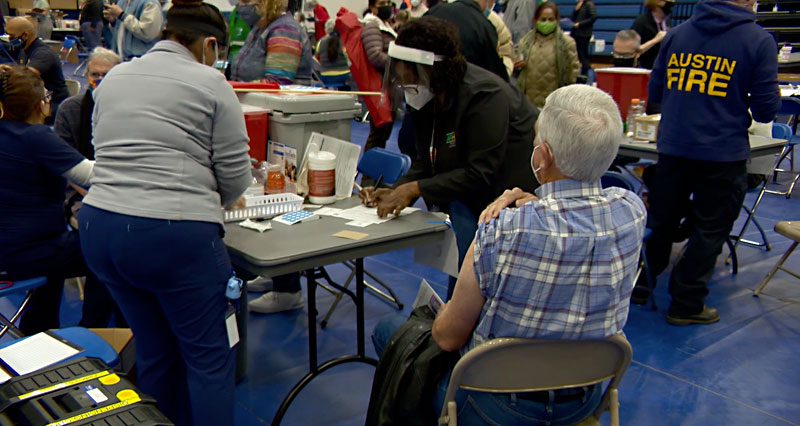 Approaching one year into the COVID-19 crisis, much of the country now finds itself in the midst of a frustratingly familiar situation: an evolving vaccination effort that in many ways echoes earlier fragmented responses to the pandemic last spring.

The complicated reality of vaccine rollout was made evident in a joint briefing from Austin Public Health earlier this week. Members of both the Austin City Council and Travis County Commissioners Court spent much of that meeting seeking clarity on how, when, where, and to whom vaccines would be available among their constituents.

Within the last two weeks, Texas' vaccine rollout has begun to pivot away from its original distribution plan, which relied on existing medical and pharmacy providers, toward larger shipments of vaccines to "hubs" capable of administering them at higher volumes. In Travis County, 88,825 doses of the Pfizer and Moderna vaccines have been allocated to providers as of Jan. 19, according to Texas Department of State Health Services data. About 24,000 of those initial doses have gone to APH, with another 1,950 sent to UT Health Austin (the clinical practice of Dell Medical School) primarily to vaccinate health care workers; those are both designated by DSHS as "hubs." But APH's current supply does not even cover half of the approximately 60,000 people who qualified for immediate vaccination when they signed up in APH's preregistration system last week. APH Director Stephanie Hayden-Howard said around 166,000 accounts in total were created in that system, despite reports by users of site crashes and error messages.

Within the last two weeks, Texas’ vaccine rollout has begun to pivot away from its original distribution plan, which relied on existing medical and pharmacy providers, toward larger shipments of vaccines to “hubs” capable of administering them at higher volumes.

The agency is vaccinating those in Phase 1b – people over age 65, or younger adults with medical conditions that put them at risk of more severe disease – in addition to local teachers. "We are prioritizing educational staff, folks that are working in private and charter schools. We started that process yesterday [Jan. 18], and we will continue that effort this week," explained Hayden-Howard.

Meanwhile, Austin Interim Health Auth­or­i­ty Dr. Mark Escott reported less dire indicators this week than in the previous six weeks. There has been some flattening in the seven-day moving average for hospitalizations and ventilator use, according to APH data, though the number of ICU patients is still 101% higher than a month ago. Notably, Austin's positivity rate dropped yet again last week, from 16.2% to 12.8%. Having reached that number with more than 20,000 test results already in for last week, Escott called the new rate "a positive indication that things may be slowing significantly." That being said, every age group over the age of 40, as well as high school-aged students, is experiencing positivity rates higher than that of the overall community's rate.

Based on projections from UT's COVID-19 Modeling Consortium, should these current trends continue, then rapid increases in hospitalizations and ICU capacity could potentially be staved off, as the current modeling shows some flattening. Although there may not be a spike in hospitalizations right now, the model still predicts that local intensive care units will hover around a total surge capacity of 200 patients into mid-February.

"Again, [this is] better news than I had last week," said Escott. "But similar to the other projections that I provided over the past 11 months, this is dependent upon us as a community continuing the protective actions that are resulting in this decrease in hospitalizations."