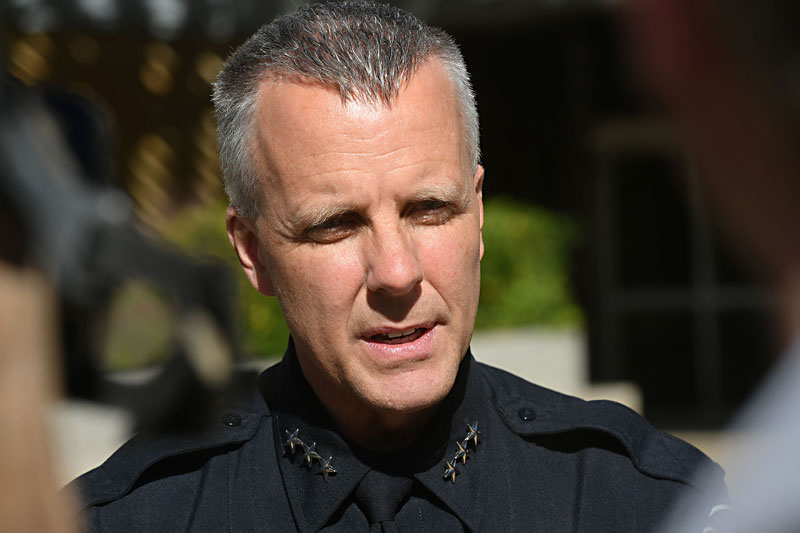 In a contentious email exchange with Council Member Alison Alter, Austin Police Department Chief Brian Manley declined to "proactively investigate" to determine if anyone from the department participated in the Jan. 6 Capitol insurrection in Washington, D.C.

In emails obtained by the Chronicle, the CM also asked the chief to send a message to his officers condemning the participation of law enforcement in the uprising that led to at least five deaths. As of Jan. 16, according to reporting by progressive legal news site The Appeal, 32 people from 15 states who took part in the Jan. 6 "Stop the Steal" Trump rally have been outed as law enforcement officers. "I suggest that you make clear to every officer and staff member where our department leadership stands," Alter wrote in an email copied to her staff, City Manager Spencer Cronk and two of his deputies, Manley's own chief of staff Troy Gay, and Office of Police Oversight Director Farah Muscadin.

“We do not open investigations into our officers to prove they did not engage in conduct that nobody has alleged they did.” – APD Chief Brian Manley

Manley was unreceptive. "First, you do not have any indication any APD personnel took part in the assembly, protest, or insurrection at the US Capitol, nor have I received any information implicating the same," he replied to Alter. Noting that the CM hadn't inquired about other city employees or departments, he wrote, "We do not open investigations into our officers to prove they did not engage in conduct that nobody has alleged they did."

Manley also wrote that the FBI would "immediately reach out" should they uncover evidence that any APD officer participated in the events, but a preemptive internal investigation would tie up critical resources and demean the integrity of his officers. However, both Houston Chief Art Acevedo, who preceded Manley at APD, and Bexar County Sheriff Javier Salazar announced last week they've reported members of their own forces to the FBI after they were spotted in social media posts from the Capitol riots. (The Houston cop has resigned and is facing federal charges; the San Antonio corrections officer is still under investigation.)

It appears no such "proactive" investigation is underway. "Despite the fact that these types of inquiries are not in the purview of the City's Human Resources Department," a city spokesperson said in a statement, "we are committed to working collaboratively to resolve such matters." The statement notes that APD Internal Affairs is responsible for conducing investigations into allegations against officers, and the Special Investigations Unit assists when a criminal allegation is involved.

As for sending a memo to his officers, "I regularly put out messages or videos and this may be covered in a future communication ... but to be clear, the men and women of APD know where I stand on law and order," the chief wrote.

In her response, Alter asked, "Would a little repetition really hurt APD staff? As an educator and as a parent, it has been my experience that you look for teachable moments to encourage desired behavior and that repetition helps lessons sink in."

Finally, Manley forwarded the full exchange between himself and Alter to the entire department, appending a brief statement: "I know you all watched the events that occurred at our US Capitol and were shocked by the violence," he wrote. "It is disheartening and disappointing to learn that there were law enforcement personnel among those committing these violent and illegal actions. ... I both expect and know you will serve with honor, dignity, and respect for our democratic principles, rule of law, and departmental values."

The private exchange became yet more public when the Austin Police Association blasted an anti-Alter message to members and the media, saying the emails show the CM is "clearly against" officers, "holds them in contempt," and is retaliating against the union's endorsement of her opponent Jennifer Virden in the recent election. "Alison wants to use her elected position to intimidate a select group of city employees," according to the union's message.

Alter disagreed, telling us she didn't assume any wrongdoing among APD officers but saw an opportunity for both Council and APD to "affirm our values when we're under attack." She added: "It's strange that our police chief hadn't done this on his own."

Some of her colleagues have agreed; CMs Pio Renteria and Leslie Pool told us they think further investigation is warranted. "We need to know, because what happened in D.C. was sedition," Pool said. "The chief should have wanted to know on his own." CM Greg Casar said he would support an investigation done in an "appropriate way" to determine if any city employees took part, but that the APA is being "disingenuous. ... We hold elected officials and police officers to the highest standard. Elected officials make rules and laws. and officers have some of the greatest responsibility and power in the city." (Both also swear an oath to uphold the U.S. Con­sti­tu­tion.) But "if anybody working for the city stormed the Capitol," Casar continued, "they should be held accountable."

Striking an even more cautious note, CM Paige Ellis noted in a statement the distinction between engaging in protected protest and violent behavior. She does not call for an investigation, pointing out that Manley is already in touch with the FBI, but adds, "it is our job as elected officials to keep the public safe – and that includes keeping an eye out for conduct unbecoming of our sworn personnel – whether that's in our nation's capital or here at home in Austin."