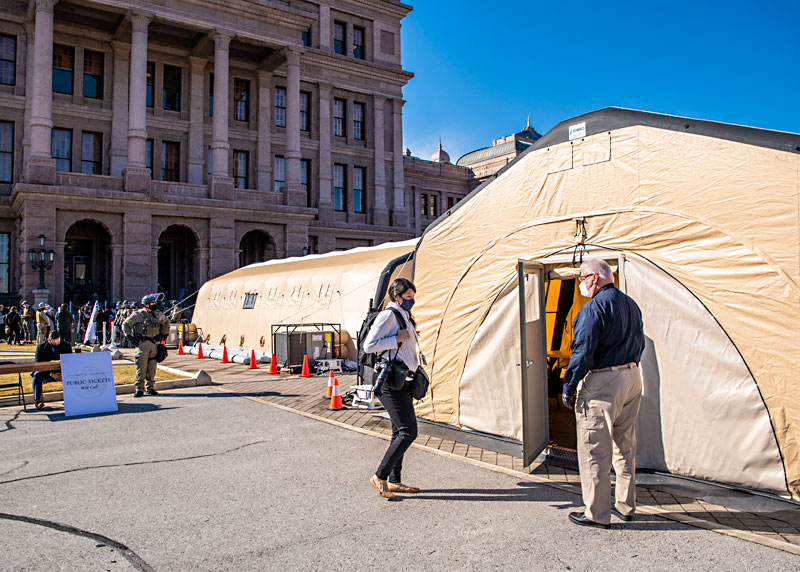 COVID-19 is endangering record numbers throughout Texas, but state leaders are determined that the show must go on for the 87th Texas Legislature. That will mean bringing lawmakers, their aides and other Capitol staff, and at least some members of the public together as always, while not staging a superspreader event.

Leading up to opening day on Jan. 12, the House and Senate crafted rules to cover the basics. A Jan. 4 memo from Lt. Gov. Dan Patrick allowed senators only four guests for the swearing-in ceremonies and mandated that all entering the chamber be screened with a COVID test. (Though masks are required for Capitol entry, they are not required in the chamber.) Patrick pledged the Senate will downsize all ceremonial events this session; guests won't be allowed to congregate outside the brass rail on the Senate floor and only four members of the media, chosen from a rotating pool, will be permitted inside the chamber at any time.

Rep. Donna Howard, D-Austin, House Administration vice chair last session and part of a working group of 10 members assembled by incoming House Speaker Dade Phelan to evaluate this session's options, outlined similar measures: "Everybody on the House floor and chamber will be required to wear a mask and will be required to be tested before coming into the chamber." Members' desks have been rearranged to facilitate social distancing; seating in the gallery has been modified as well.

These are huge changes to the Lege experience. The first day of session is usually a big, raucous, emphatically Texan affair, with the floors and galleries of both houses packed shoulder to shoulder. Crowds are common throughout the session; thousands of lobbyists, constituents, and visitors push through the massive oak doors of the Capitol and descend into the underground Capitol Extension, which houses the cafeteria and dozens of offices and hearing rooms.

The Capitol was reopened on Jan. 4 after being closed for six months. (It was then closed again on Jan. 6 during the U.S. Capitol riots, holding at bay a large but ultimately peaceful MAGA crowd here in Austin.) Though masks are mandatory for entry, free COVID-19 testing is voluntary for those not entering the chambers. But state leaders are worried that even with these precautions, allowing the usual levels of humanity into the building could lead to a mass outbreak. In his memo, Patrick stated, "In addition to keeping everyone safe, we also want to avoid a potential shutdown due to the virus so we can carry out our constitutional duties over the next several months."

In early December, House Admin chair Rep. Charlie Geren, R-Ft. Worth, told a group of lobbyists, "We're going to plan for an outbreak in the Capitol. I think we have to." He said Plexiglas dividers and air purification systems have been placed in committee rooms, conference rooms, and offices; members are allowed to set their own protocols for masks, distancing, and testing within their offices.

Many difficult questions could not be answered until the members voted on House Rules on Jan. 12, including how to handle committee hearings, an integral part of the lawmaking process involving crowds of witnesses – experts, lobbyists, advocates, and the public – from across the state. How­ard says the Texas Constitution requires public access to committee hearings, which it of course assumes would be in person.

"We certainly can make everything available on the web," Howard told us earlier this month. "But in terms of testimony, there is still a lot of research going on as to what the Constitution requires and what seems to be logistically possible." The prior House Rules needed to be changed to allow for members to participate remotely to establish quorum, or to vote.

With pandemic protocols placing literal and figurative limits on the Lege's bandwidth, members are thinking through whether and how to limit the flood of new bills filed this session. The 86th Legislature saw more than 7,300 bills filed in the House and 3,500 in the Senate; nearly 1,400 have already been prefiled for this session. State leaders say there are only three must-do bills this session – the budget as always (this year, Senate Bill 1); redistricting after receiving the 2020 census data; and COVID-19 relief. Redistricting has been punted to special sessions since 1991, and this year's census data is already expected to arrive later than usual.

There is still a lot of research going on as to what the Constitution requires and what seems to be logistically possible.– Donna Howard

While marquee proposals like the George Floyd Act (read more) and Gov. Greg Abbott's legislative priorities, including a ban on tax-funded lobbying, will also move to the front of the line, limiting the total number of bills would reduce the number of people in the Capitol and take stress off the staffers who write bills and manage committee hearings, most of whom have been working from home since the beginning of the pandemic. Some departments have not hired the temporary staffers who normally help with the crushing biennial workload.

Legislators and staffers don't have special eligibility to receive COVID-19 vaccines, though close to one-third of members are 65 or older or have underlying medical conditions. Howard said legislators hope that, as more Texans get vaccinated, the likelihood of a mass outbreak at the Capitol will fade.

But legislators have to plan for it. "We know that in any large setting, such as with our schools, despite every effort that they've made to keep a facility safe, we've had some outbreaks," Howard said. "I think the assumption is this will be no different. But doing whatever can be done to allow people to continue to participate is what is being looked at now."

A version of this article appeared in print on January 15, 2021 with the headline: How Will This Session Work?