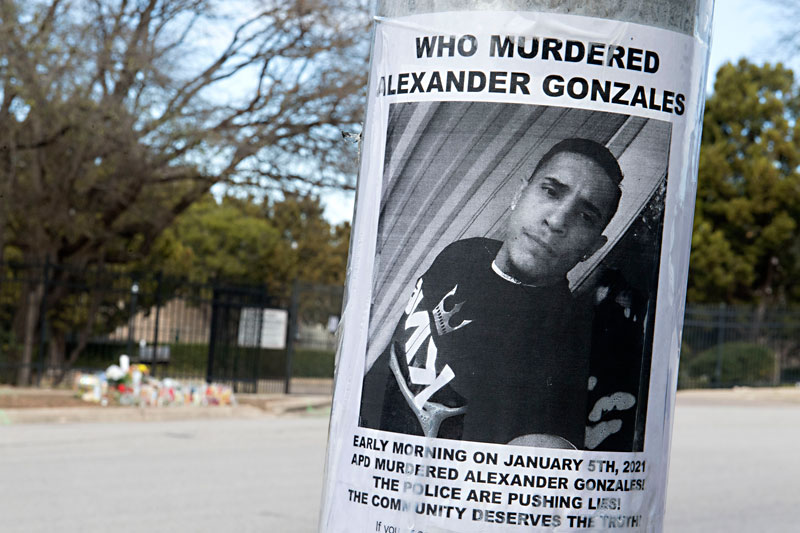 Austin police shot and killed Alexander Gonzales and injured his girlfriend, Jessica Arellano, in Southeast Austin shortly after midnight on Jan. 5, following an alleged altercation between Gonzales and an off­-duty Austin Police Department officer while both were driving in the 2500 block of Wickersham Lane. Gon­zal­es and Arellano's 2-month-old son was in the backseat of the car and was not injured.

The officer claims to have been cut off by Gonzales, who, the officer told investigators, pointed a gun. This prompted the officer, not in uniform and in a private vehicle, to fire a number of rounds at Gonzales' vehicle before initiating a stop and calling 911. From here, bystander video recorded by a witness from a nearby apartment balcony shows how events unfolded.

“There was a baby in the car, so what on earth were these people doing?” – Attorney Jeff Edwards

The video begins with the witness claiming to have heard six shots fired; it's unclear whether any were fired from the vehicle, where a gun was later found by investigators. Presumably at least one hit either Gonzales or Arellano, or possibly both. Arellano can be seen on the ground, saying, "My baby, my baby." While talking to 911 dispatch, the officer says, "The female passenger, she's lying on the ground ... The driver, he's got blood all over his face and I don't know if he's still got the gun in his hand or not."

Shortly after, uniformed officers in patrol vehicles arrived on the scene. The video shows Gonzales exiting the vehicle and moving toward the rear passenger side – as if to check on his son – when officers begin shouting commands at him in English and Spanish. About a minute later, as Gonzales opens the rear door, an on-duty officer fires, fatally wounding him.

Neither the bystander video nor information released by police Chief Brian Manley in the early hours of Jan. 6 indicate any attempt to de-escalate the situation or to use less-lethal force against Gonzales. At least 10 rounds were fired at Gonzales; both officers who fired their weapons have been placed on paid administrative leave pending internal and criminal investigations. Neither officer's name has been released. The off-duty officer has five years with APD; the one who fired the fatal shot has two years.

Arellano is recovering in an area hospital and has not yet given a public statement; her son is in the custody of Child Protective Services. Many questions remain unanswered about what happened before the off-duty officer fired at the vehicle, which only Arellano and the officer can answer. Body-worn camera footage from after the arrival of uniformed patrol will be available but, as is typical, has not been released yet.

Arellano is represented by local civil rights attorney Jeff Edwards, who on Jan. 11 had little more information to share with the Chronicle. "We have yet another unarmed minority, my client, shot by Austin police officers," he told us. "There was a baby in the car, so what on earth were these people doing? Anytime a department investigates itself you have to question the integrity of the investigation. You don't have to be a rocket scientist to know change comes from independent investigation." Another prominent Austin civil rights attorney, Rebecca Webber, is representing the Gonzales family. Webber also represents Brenda Ramos, whose son Michael was killed by APD Officer Christopher Taylor last April; she filed suit against the city and Taylor just last week.

To gather more information on the shooting, Webber hired a forensics specialist to perform an independent autopsy on Gonzales, in addition to the one conducted by the Travis County Medical Examiner's Office. That second autopsy has been completed, but APD has yet to provide information needed to finalize the autopsy report. An independent autopsy could help establish if Gonzales had been wounded by the first rounds of gunfire, before patrol officers arrived on scene.

Gonzales' parents filed a petition in the 126th District Court Wednesday, Jan. 13, requesting that the judge intervene in an active Child Protective Services case regarding Arellano and Gonzales' infant son, asking that the child be placed in their custody. As the Chronicle went to press, Webber was preparing to file a petition known as a Rule 202 that would essentially compel APD to release the 911 call made by the off-duty officer, along with any relevant body-cam footage captured on the scene. 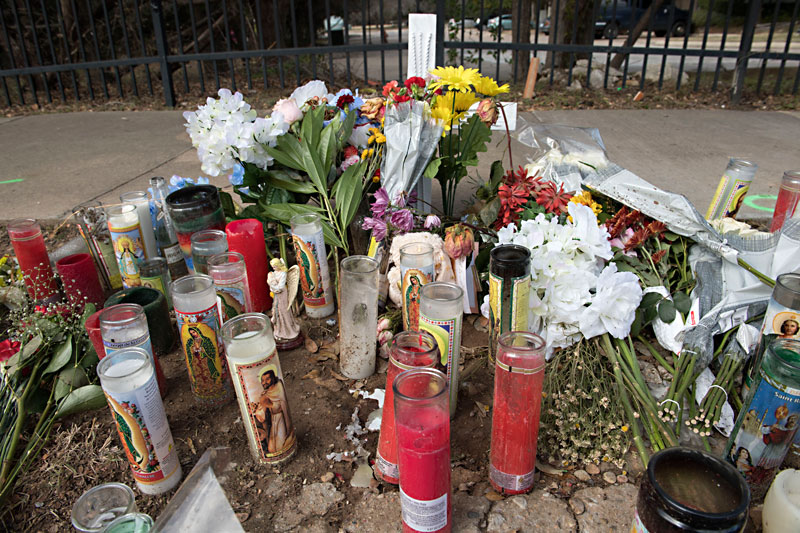 Webber says her experience with APD representing Brenda Ramos motivated her to file the Rule 202 petition. Ramos still has not seen the autopsy report from her son's death, and it took APD 94 days to release footage from the shooting; the department's "critical incident" policy says that video should be released within 60 days of an incident, although the police chief has authority to delay release for a number of reasons.

"I am disgusted that Austin Police and the Travis County Medical Examiner continue to treat Austin families whose loved ones are killed by police like they are not human beings who deserve to know what happened," Webber told us. "These families are not criminal suspects, the Austin police officers who killed members of our community are. APD's debacle over the summer in rolling out the new video release policy was at Ms. Brenda's expense. I am not willing to subject Mr. and Mrs. Gonzales to APD's empty lip service about transparency."

APD's Special Investigations Unit will complete its work first and deliver its findings to Travis County District Attorney José Garza before APD Internal Affairs probes whether either officer violated department policy. Garza has committed to presenting cases of alleged officer misconduct to a grand jury within 30 days whenever possible; many APD shootings, including that of Ramos, have awaited grand jury review for months while outgoing D.A. Margaret Moore finished her term. APD declined to answer questions about the shooting or why it's blocking the autopsy report: "All the information that is currently available was provided during the on-scene briefing and in subsequent press releases," an APD spokesperson told us. "I don't have a timeline for when new information will be available."

What can be seen in the bystander video has already horrified justice advocates. "What we can take away from the video is [that] screaming, 'Stop,' and screaming, 'Alto' ... is not de-escalation," Kathy Mitchell of Just Liberty told us. "The result is confusion, lack of communication, and death. Completely avoidable death."

Winter Is Still Coming: An Update on Water, Power and Other Relief for Austinites
As the city thaws, utilities slowly repair damage, restore service