In October, Save Barton Creek Association released a "Hill Country Sewage Scorecard" grading local wastewater treatment plants on their pollution contributions to local lakes and streams. They didn't do so hot: 81% of the 48 plants studied since 2017 exceeded at least one of the pollutant limits in their permits – two of the F grades went to northeast suburbs Pflugerville and Manor. Only 22% received any kind of formal enforcement action from the Texas Commission on Environmental Quality, the agency that's supposed to regulate these transgressions. Even more ironically, the data in the report was self-reported by the plants themselves to the U.S. Environmental Protection Agency. 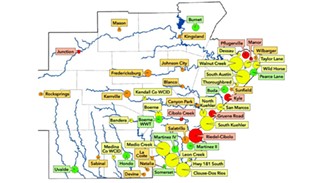 The bacteria used to treat wastewater is aerobic, meaning it uses oxygen as fuel; when it's dumped in a stream, it eats up the oxygen fish need to survive. Other bacterial byproducts of insufficient sewage treatment include nitrogen and phosphorus, which fertilize algae and lead to algae blooms that make the water unswimmable and potentially dangerous for dogs, as Austin has seen multiple times in the last year in Lady Bird Lake. "We feel that the informal enforcement actions [from TCEQ] really aren't having an effect, because the exceedances are still happening," explains Brian Zabcik, wastewater campaign organizer at SBCA, referring to TCEQ's current policy of calling or emailing to reprimand a misbehaving plant. "Only a formal enforcement action or monetary penalty will really prod plants to literally clean up their act."

The Scorecard study comes from a group founded in 2017 called No Dumping Sewage, which has a set of short- and long-term recommendations for reducing water pollution. In the short term, the coalition wants better enforcement and better standards in wastewater treatment permits. That means fines for offending plants and adding limits for nitrogen and phosphorus to all sewage discharge permits.

Long term, Zabcik says, "the solution is to not dump sewage into streams or lakes at all." One way to do this is with a land application permit, which allows partially treated sewage to be irrigated onto a field to finish treating with aerobic bacteria and then soak into the ground instead of flowing into waterways. Another way is beneficial reuse, says Zab­cik, meaning "you use it again within your buildings for lower­-priority purposes. The crazy thing is that we're using our very best water for everything; we don't need drinking-quality water for flushing toilets and watering our gardens."

Zabcik says Austin Water has already been moving in that direction with a reclaimed water "purple pipe" system that allows developers to access nonpotable water for such uses – that's what the water tower at Mueller helps to support. The Highland Lakes region, where TCEQ banned new discharge permits in 1986, has been using land application permits and purple pipe systems ever since to serve its booming population; the city of Austin led a lengthy stakeholder process to help TCEQ expand its definition of "beneficial reuse" to make that process easier.

Zabcik says that Central Texas has 34 years of proof that better sewage treatment doesn't have to stop development. "That's where treated wastewater can become a valuable resource that can help us address the problem of water conservation in Texas before it becomes a crisis."