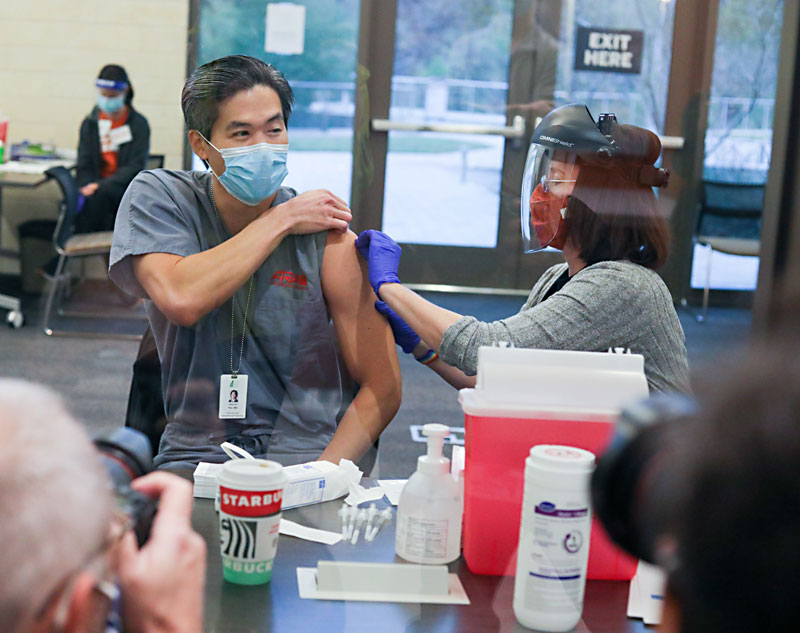 UT Health Austin was one of only four sites in Texas to receive a share of the state's first vaccine shipment – nearly 3,000 out of 19,500 doses – on Monday, Dec. 14, alongside Houston's MD Anderson Cancer Center, UT Health San Antonio, and Methodist Dallas Medical Center. An additional 19 sites in Texas received 75,075 doses on Tuesday, though none of those sites were in the Austin area. In addition to UT Health Austin, seven other providers in Travis County are slated to receive the remaining 10,725 initial doses destined for the Austin area within the next week, according to the Texas Depart­ment of State Health Services. (In all, Texas is set to receive about 224,250 doses as part of its first week's allocation.)

UT Health Austin will administer the vaccine over nine days. "It's recommended that folks that work in the same critical areas are not vaccinated on the same day or successive day," said Young, who explained that staggering distribution over several days is important as some side effects are common. "We want to make sure that our health workforce is strong and make sure that we wouldn't take out a whole group of individuals that happened to have a body reaction or side effect."

But the first day of vaccine administration in Austin – or as Interim Health Authority Dr. Mark Escott dubbed it, "V-A Day" – came with a dire warning from Escott to the Travis County Commissioners Court. Citing projections from the UT-Austin COVID-19 Model­ing Consortium, Escott told commissioners that the Austin area could reach Stage 5 of its COVID-19 Risk-Based Guidelines in a matter of two to three weeks should disease transmission continue at today's rate. Since the beginning of the month, there has been a 57% increase in the seven-day moving average for COVID-19 hospitalizations – the key indicator Austin Public Health relies on for determining risk stages – with a 13% increase in the number of ICU beds in use for COVID-19 patients.

On Dec. 15, APH reported 613 new cases, the first time daily cases have climbed above 600 since July. From Nov. 30-Dec. 13 alone, weekly hospitalizations in Austin jumped from 202 to 278, a significant increase that Escott called the "Thanksgiving effect."

"This is what we were concerned would happen," said Escott. "We cannot sustain this kind of growth in cases; we certainly can't sustain this kind of impact post-Christmas." As of Dec. 15, Austin's seven-day moving average for hospitalizations stands at 46; the qualifying threshold for Stage 5 is 50. However, Escott doesn't anticipate transitioning to Stage 5 as soon as the average hits 50, but rather if Austin remains in that range for several days – or if the number jumps dramatically to 60.

Under Stage 5, everyone, regardless of risk, is recommended to avoid all social gatherings outside of their household as well as nonessential shopping and travel. APH also recommends that businesses pivot to contactless options only. Escott has said APH would also consider prohibiting extracurricular activities at schools – where spread has been a problem in mask-free, close-contact situations – under Stage 5, in addition to exploring a curfew.

"I really don't know how to make the message any more clear – that what we're doing now is not working, that the precautions people are taking [are] not working," said Escott. "If we thought Thanksgiving was bad, this is going to be a memorable Christmas for folks for the wrong reasons. We're going to see unprecedented levels of cases and deaths in this community between now and the end of January if we do not take action right now.