1) Jan. 13: Red Guards Ambush Heidi Sloan The Democratic Socialists of America organizer and candidate for Congress in the TX-25 Democratic primary was waylaid and threatened by militants associated with the ostensibly defunct Maoist group Red Guards Austin, highlighting stress fractures at the leftmost edge of Austin politics even as the influence of DSA-aligned progressives surged in an increasingly deep-blue Travis County. Sloan would lose her race to the also very progressive Julie Oliver, who set up a rematch with GOP incumbent Roger Williams.

2) Feb. 23: Bernie Sanders Rolls Through Town As Texas found itself a pivotal state in the 2020 presidential primary, candidates with Austin connections, including (one-time UT prof) Elizabeth Warren and (friend of Mayor Adler) Pete Buttigieg, made late swings through town, but none drew a bigger crowd than Sanders, who was widely expected to pick up most of the locally awarded delegates and who, at this point, was the national front-runner before Joe Biden's comeback win in South Carolina. A lot changed in the following week ...

3) March 3: The Super Tuesday Before Black Friday By the time Texans wrapped up voting in the presidential primary, Sanders and Biden were the only candidates still standing, and the former VP ended up carrying the state, although both Sanders and Warren earned delegates from Travis County. The biggest downballot races for Austinites – including the district attorney melee and the U.S. Senate primary featuring local heroines MJ Hegar and Cristina Tzintzún Ramirez – ended up going to overtime in what was supposed to be a May run-off, but three days after Super Tuesday, South by South­west was canceled (No. 1 under "The Plague Year"), starting a chain of COVID-related events that scrambled the Election 2020 calendar. 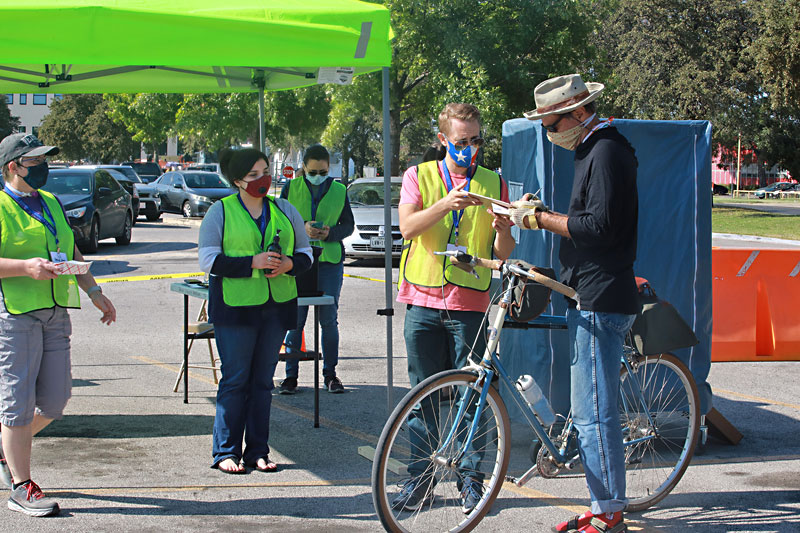 4) April 17: Judge Rules Anyone Can Vote by Mail The decision by District Judge Tim Sulak – who, ironically, had been defeated in his own primary bid in March by "vexatious litigant" Madeleine Connor – opened the door for what would become a months-long tug of war over extending the right to vote by mail, typically exercised sparingly by Texas voters who met narrow criteria for eligibility, to the broader electorate in light of the pandemic. After threats of criminal prosecution by Texas Attorney General Ken Paxton and adverse rulings by the Texas Supreme Court and 5th U.S. Circuit Court of Appeals, the VBM tussle cooled down somewhat, but in both the July primary run-off and the November elections, the number of voters using mail ballots increased about fivefold from comparable prior elections, as Travis County Clerk Dana DeBeauvoir made clear her office was not able or willing to check on each voter's "disability" status.

5) July 14: A Knockout Blow on the Courthouse Steps When it actually came time to hold that primary run-off, the most significant outcomes for Austinites came in the races for district and county attorney. In the former, Workers Defense Project leader José Garza resoundingly defeated incumbent D.A. Margaret Moore, drawing national attention for his platform to upend the local criminal justice status quo and change course on sexual assault cases, police violence, and other fronts. In the county attorney race, Mayor Pro Tem Delia Garza (no relation) beat out Laurie Eiserloh, a top deputy of retiring incumbent David Escamilla, with a campaign built upon similar themes of justice reform.

6) July 27: Eddie Rodriguez Withdraws From State Senate Race On top of the run-offs, July 14 also saw the special election to replace state Sen. Kirk Watson, who'd announced his resignation back in February; Travis County Judge Sarah Eckhardt finished with 49.66% of the vote, and rather than prolong the increasingly bitter intra-party fight until another run-off in October, state Rep. Eddie Rodriguez, the distant second-place contender, announced he'd drop out and focus on what, at this point, seemed a really promising effort (led by his friend and fellow Rep. Celia Israel) to flip the Texas House.

7) Aug. 24: Council Calls Tax Rate Elec­tion for Project Connect The mammoth proposal to basically build out both rail transit plans previously turned down by Austin voters (in 2000 and 2014) seemed a no-brainer when the system plan was adopted back in March (the Monday after the Black Friday after Super Tuesday; also the last time Coun­cil actually met in person). By the time the deadline arrived to call the associated tax rate election, things looked very different, and a strong opposition campaign sprung up immediately to decry the craziness of making a $7 billion commitment during the pandemic. In the end, this counterargument proved unconvincing, as Austin voters approved the two mobility propositions on the November ballot by sizable margins.

8) Oct. 1: Governor Dials Back Ballot Access Plans Earlier in the pandemic, Gov. Greg Abbott had in his emergency executive orders authorized counties to accept hand-­delivered mail ballots. By crunch time in the November campaign, Travis and Harris counties had rolled out multiple ballot drop-off sites, Republicans grew exceedingly nervous about expected enormous Democratic turnout, and Abbott tried to put the toothpaste back in the tube while under fire from the right wing of his own party. This just succeeded in drawing international attention to Texas' traditions of voter suppression.

9) Nov. 7: Everybody Loses, Everybody Wins. When the most anticipated election night in modern memory finally rolled around, the Texas Bluenami proved to be completely ephemeral; despite $150 million or so in campaign spending, Dems made no gains at all in the Texas Legislature, in Congress, or in statewide offices. But neither did Republicans recapture any of their losses from 2018, leaving the new battle lines in place for a statewide stalemate in 2021 and beyond. By Saturday after Election Day, it was clear that President Trump had lost, and there was much rejoicing, and you know what happened next.

10) Dec. 15: The Last Votes Are Cast And to close out the year, fewer than 10% of eligible voters made their way back to the polls to resolve the last two City Council and Austin ISD board races. Mackenzie Kelly's narrow defeat of incumbent Council Member Jimmy Flannigan represented the most successful pushback by local conservatives against Council's reformist moves on homelessness and de-policing; she'll join Vanessa Fuentes, who resoundingly won the race in November to succeed Delia Garza, as a new (young, female, suburban) voice at City Hall. On the school board, Save Austin Schools co-founder Noelita Lugo, perhaps the highest-profile opponent of AISD's unpopular 2019 school closures, came from behind to win the At-Large Place 8 seat; she'll join Ofelia Maldonado Zapata, Kevin Foster, and Lynn Boswell as new voices on a transformed board focused on change.