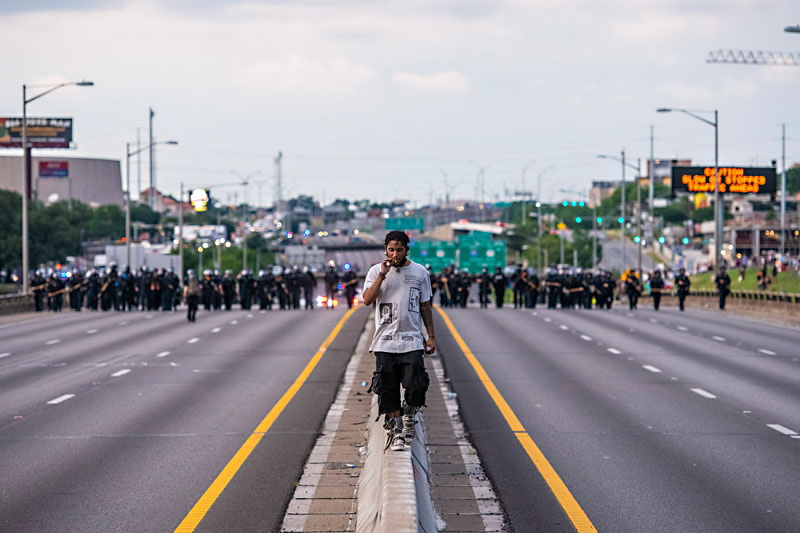 On May 30, the streets outside the Austin Police Department erupted with protests spurred by the killing of George Floyd in Minneapolis and other high-profile cases of police violence against the Black community, including the shooting death of Austinite Michael Ramos in April. The following day, just like the previous, protesters blocked the I-35 overpass at Eighth Street. As officers in riot gear – wielding myriad "less-lethal" weapons – formed a line to clear it, I made my way onto the highway. In the moment I made this photo, all the protesters had already retreated – except this one. He walked the median like a tightrope, back to the police and smoking a blunt, a casual posture, yet pointedly in defiance of the danger edging closer. Adrenaline skyrocketing, blindly trusting that I'd be recognized as media and not fired upon, I asked my housemate (and fellow photojournalist), Casey Holder, for a boost up and captured what, for me, became the epitomic illustration of the summer's protests: an individual occupying the line that was historically a literal racial divider in Austin, alone in the moment, but in reality part of a multitude working to transform a barrier from the past into a bridge to a potential future. It was only later, when I enlarged the image, that I realized the text on his shirt reads "Blvck History." – David Brendan Hall 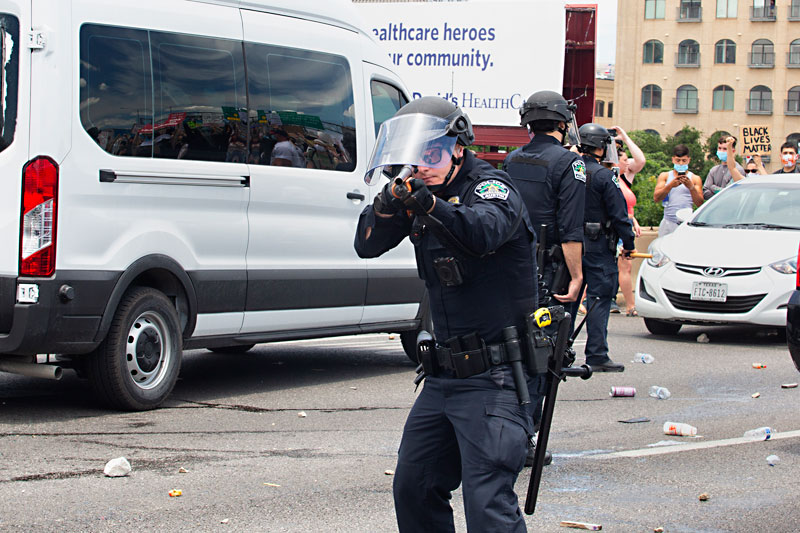 Black Lives Matter and Mike Ramos Brigade protesters climbed onto I-35 and stopped traffic for several hours in protest of police violence against communities of color. The Austin Police Department responded by shooting "less than lethal rounds" into the crowd, spraying them widely with pepper spray, and using horses to clear the road. This is my top photo because it's the first time in all my years of covering protests that I have had a gun trained on me by police. There has been an enormous amount of anger from the public in response to APD's tactics regarding the protests. Many police had these weapons this day, which ended with several people being shot, some seriously injured, by the Austin Police Department, leading to calls to reform the department. – Jana Birchum 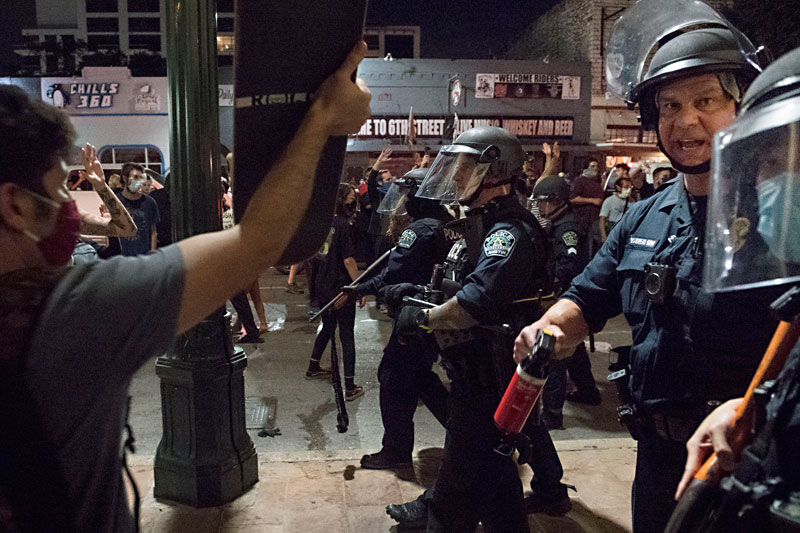 On the second night of protests after the death of George Floyd, police were clearing Downtown of protesters. At one point they had formed a line completely across Sixth Street, including the sidewalk. Marching toward the crowd, officers were aggressively shouting at protesters to leave and raising guns armed with non-lethal baton rounds. Wanting to capture the clash between police and protesters as it moved down the street, I surreptitiously ducked inside a doorway. Despite wearing press credentials and legally standing on the sidewalk, a maskless officer wielding pepper spray and apparently surprised at my presence, yelled at me to get back with the protesters. Trying to avoid arrest, I quickly followed orders but not before grabbing this shot.– John Anderson