Stories within stories shaped a year of sitting still 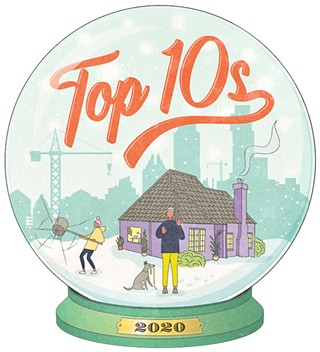 Over the past couple of years, we've settled on a format for the News department's Top 10 contributions: one list, the 10 most important stories of the year, in chronological order. Simple, elegant, tells a story, we like it. This year blew it all to hell.

In our first issue of the year, we wrote we’d be willing to set aside campaign coverage “in favor of more truly important stories shaping our community. But there aren’t any.” Ha!

Even as we, like many of you, felt like we were doing very little – sheltering in place, avoiding gatherings, engaging with the entire world through remote viewing windows – we were bombarded and drenched by news, spurting all over the virtual Chronicle from multiple high-pressure hoses. Just the events of the COVID-19 pandemic itself were enough to fill up a Top 10. Then we had the all-consuming 2020 election cycle, which we had expected would capture the bulk of our attention: In our first issue of the year, we wrote we'd be willing to set aside campaign coverage "in favor of more truly important stories shaping our community. But there aren't any." Ha! But we still had elections, and in fact threw in some extra ones, and we easily pulled together a Top 10 there.

Yet one could argue that neither of these long slogs through the news jungle included the biggest story in Austin this year. Rela­tive­ly speaking, our city avoided many of the worst tragic outcomes of COVID-19, and our local elections were not as dramatic as those elsewhere. But we entered truly uncharted territory with the community's long-­gestating and deeply felt reckoning with equity in justice, with the value of Black and brown lives, and with the unexamined accretion of money and power by the Austin Police Department. The deaths of Michael Ramos and Garrett Foster, and APD's violent response to protests after the killing of George Floyd, shook the table of local politics, felt both in City Council's historic commitment to de-policing and in the subsequent elections, including those that ended this week.

And even with another Top 10 just devoted to that, we still had enough stories left over to round out this year's Top 40 – a noisy playlist to be sure, but full of tunes we'll remember for a long time, even once we stop sitting still.  – Mike Clark-Madison