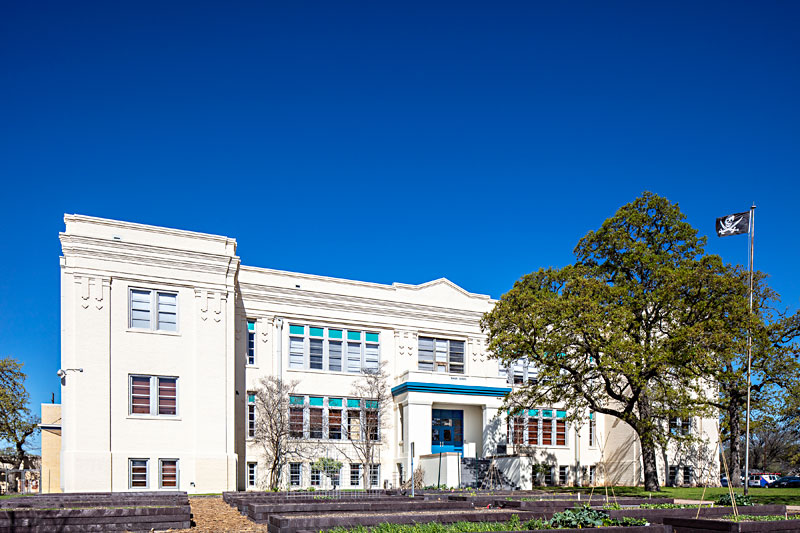 City Council will take up a packed agenda today, Dec. 10, in its final meeting of 2020. One item that has gained attention is a zoning case in which the new owners of the landmark Baker School – Alamo Draft­house co-founders Tim and Karrie League – are seeking historic status for the site on Avenue B in Hyde Park.

Since purchasing the 3.35-acre property from Austin ISD in 2019, the Leagues have begun using the site as headquarters for the Drafthouse while undertaking a costly restoration of the school building; architect Richard Weiss estimates the price tag to date at about $5 million. The Baker School opened in 1911 and served as a draw for families moving to Hyde Park; it later functioned as a public middle and high school until the 1980s, when AISD began using it for administrative offices. The district began the process to sell the property – along with other high-profile sites, including its own former headquarters on West Sixth Street – in 2016.

A condition of sale set by AISD for all of these properties was that any housing to be built at the sites would include income-­restricted units. Some understood this to mean that the Baker School project would include housing, but Weiss says that wasn't the commitment made by the Leagues. "Our intention was to do affordable housing on the site," Weiss told us, "[but we] filed a restrictive covenant with Travis County that said if any housing was built, 25% of the units would be affordable."

The Historic Landmark Commission voted Nov. 16 to grant historic zoning to the entire Baker School property, including its two surface parking lots, which can accommodate about 100 vehicles. But on Nov. 24, Planning Commission opted for staff's recommendation to exclude the parking lots, which are currently zoned to allow two-­story residential buildings. If Council approves that recommendation, the Leagues would receive a $47,744 abatement on a total city property tax bill estimated to be $268,291 (the site is appraised at about $11.8 million). Extending historic status to the parking lots would save them another $11,911.

As a contributing structure to both national and local historic districts in Hyde Park, Baker School already enjoys protections against future demolition, regardless of the outcome of the current case. Historic zoning would enable the tax abatement that's intended to serve as an incentive offsetting the costs of preservation and restoration. The parking lots could be rezoned to allow for higher-density housing while preserving the school itself, but any such housing would still need to be approved by the Historic Landmark Commission, and such buildings would obstruct the school's protected facade.

Inside the Baker School, before (l) and after its recent renovation (Photos by Patrick Wong)

Instead, an alternative agreement between the Leagues and the Hyde Park Neighborhood Association – the primary political force in the area – was reached to zone the vacant Baker Field (the school's former athletic grounds) for up to five stories of residential development. Weiss says the Drafthouse founders intended to partner with a developer to build on that site, but before they could close on the property, the city's Watershed Protection Department* made clear its intention to buy the 1-acre field to build stormwater detention for the flood-prone neighborhood.

“At the time of purchase, a pledge was made to provide affordable housing that is now being completely negated.” – Planning Commissioner Awais Azhar

Council unanimously approved purchase of that land on March 12 of this year at the fair market rate of $3.7 million, and Watershed has planned a detention pond that city spokesperson Susan Garnett says will protect 221 homes in the area from flooding. (City housing and real estate staff had considered purchasing Baker School back in 2016, before it was purchased by the Leagues, and did end up acquiring two other properties AISD offered for sale.)

At the Nov. 24 PC meeting, Commissioner Greg Anderson asked staff why Baker Field couldn't accommodate flood mitigation and housing. "It was determined that building a detention pond underground, to accommodate housing on top, was infeasible," Gar­nett told us in an email. "Again, primarily due to the surrounding flooding that concentrates on this lot." The consolidation in this fiscal year of Housing and Planning into a single department, and the co-location of relevant city functions at the long-awaited "one-stop shop" at Highland, is an attempt by City Hall to address some of the siloing that happens in cases like this, where different departments have different visions for the same piece of property.

In any event, housing at the Baker School is now less likely. Planning Commissioner Awais Azhar reflected on this at the Nov. 24 meeting: "At the time of purchase, a pledge was made to provide affordable housing that is now being completely negated." Azhar said that historic status "feels like the owners are moving in a direction where they will never have to build housing whatsoever ... This seems like a break of the Austin community's trust."

Council is also set to approve a $7.5 million contract with Caritas of Austin to house approximately 275 people currently staying at the city's protective lodges. Known as ProLodges, these housing facilities were quickly set up this spring as a safe place for people experiencing homelessness and vulnerable to COVID-19 to quarantine. The federal CARES Act funding used to operate the facilities is set to expire by year's end, so the city is looking to Caritas as the lead agency in a collaborative called "Best Single Source Plus" to coordinate with other service providers to place ProLodge guests into other rapid rehousing programs.

On the "reimagining public safety" front, Council will likely extend a contract with consulting firm 21st Century Policing for up to six months, at a cost of $180,000, to help the city find ways to fund alternatives to police spending. Assistant City Manager Chris Shorter says the extended partnership will "help us develop plans and processes on ways to approach specific portions of the reimagining work, such as decoupling and creating new service delivery models for public safety."

* Editor's note: This story has been updated since publication to clarify which city department purchased the Baker Field property.

Council Recap: Despite "Positive Strides," APD Academy's Not Reimagined Yet
Chief, advocates agree that more changes must be made 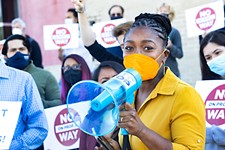