Share Some Truth, Justice, and Sustainability With These Civic-Minded Gifts

Here in the least fun section of the Chronicle, our main contribution to the gift guide is, as always, the wish list of ways to help those who help others (see austinchronicle.com/wishlist). But if you'd like something to leave under the Festivus pole, we offer the following suggestions, some of which are even a little bit fun. – Mike Clark-Madison

It's always the right time to support local independent businesses, and it's especially important now in the midst of the pandemic. The Go Local card costs $20 for an annual membership; it gives cardholders access to special deals at hundreds of local businesses. Some benefits are automatic when you sign up for the card, like 10% off all purchases at Barrett's Coffee; others are rewards, like $10 off all purchases of $50 or more at the Great Outdoors garden center. www.joingolocal.com. – Beth Sullivan

Help our communities in need and donate to the Central Texas Food Bank, the largest food bank in the region, serving nearly 46,000 Central Texans across 21 counties. In addition to monetary donations, you can give your time and volunteer to help distribute food at their many emergency food relief distributions, or give from home by hosting a "virtual food drive" fundraiser. www.centraltexasfoodbank.org. – B.S. Do you know someone who loves ambient synth music, cool shirts, and the environment? This Dajve merch from homegrown tape label Growth in Decay not only sports a sweet little Kokopelli-esque dancing figure (design by Julian Duron) but also sends 20% of its proceeds to Clean Water Action, campaigners for the environment and against threats like fracking and pipelines. You'll get a free backpack from Smoking Frog with your purchase, made with 100% post-consumer recycled fabric. Be sure to check out the Dajve tape as well – relaxing synth blips with nature-lovin' names ("Gardening," "Soil," "Sunpot"). www.growthindecay.com/products/dajve-tee. – Lina Fisher

Got a puzzle freak in your life, or a local history buff? Or maybe a few kidlets under your roof who could use some distraction? Give them (or yourself) the gift of time well spent with the History Center's free digital puzzles. The AHC has turned a handful of its collection items into 35- to 300-piece puzzles, such as photos of Graffiti Hill before its closure last year or Barton Springs Pool circa 1960. The AHC says it plans to upload more puzzles over several months, but between the endless combinations – you can break the images down into how many pieces you like – and stopwatch and scoreboard features, there's enough variety and friendly competition to keep you pleased and puzzlin' away. www.fb.com/austinhistorycenter. – B.S.

TerraPurezza Farm is a regenerative agriculture institute and working farm right outside of Austin, working on developing a sustainable and scalable alternative model to industrial agriculture. In addition to restoring native grasses and Central Texas soils, they raise chickens and pigs and supply meat to establishments such as Apis, Hestia, Emmer & Rye, and Thai Fresh. Their pigs, Red Wattle and Gloucestershire Old Spot, are heritage breeds, the "'meat of choice' for the royal family to this day," and are fed on leftover meals from Whole Foods as well as native grasses. Their chickens grow more slowly than factory­-­farmed breeds, which allows for "better flavor development and humane quality of life." For ethical treatment of animals, alternatives to our climate-destroying agriculture systems, and just plain delicious meats, TerraPurezza delicacies make a perfect holiday dinner centerpiece for your COVID pod. Check out their online menu for preorder and pickup at the Pedernales Farmers Market in Spicewood; there's something there for every discerning meat-lover (including pig ears). www.farmersmarketpreorder.com/terrapurezza. – L.F. The End of Policing

What does it mean to "reimagine public safety"? Alex Vitale, author of The End of Policing, doesn't use that phrase adopted by Aus­tin City Hall but it's the central premise to his seminal book that examines how our society can begin de-policing. Each chapter takes a look at how cities across America have turned to police departments as a means of controlling crime at the expense of funding alternative programs that could resolve the root causes of crime – most of all poverty and reduced access to opportunity in marginalized neighborhoods. – Austin Sanders

Rise of the Warrior Cop: The Militarization of America's Police Forces

The desire for de-policing also responds to the threat militarized forces pose to civil society. Radley Balko's book chronicles how U.S. law enforcement has gradually become more militarized since the nation's founding, accelerated by the war on drugs, with tactics such as no-knock warrant raids and weapons and vehicles developed for the battlefield. These are now commonplace in our cities, even peaceful ones like Austin, where city leaders acted to ban tear gas and chokeholds just this year. – A.S.

Conor Dougherty's book focuses on the affordability crisis gripping San Francisco, but its lessons can apply to the same struggle in Austin. As Dougherty explains, gentrification is not just when wealthy white people move into Black and Latinx neighborhoods and price out their incumbent residents. Displacement also results from exclusionary zoning that limits the amounts and types of housing in cities; the dramatic power imbalance between owners and renters, or landlords and tenants; and suburban sprawl that incentivizes working-class people to move away from their urban neighborhoods. – A.S.

The Color of Law: A Forgotten History of How Our Government Segregated America

Like many cities in America, Austin is economically segregated now because of decisions made and policies enacted in the last century. Slum clearance preceded expansion of the nation's highway system; deed restrictions (promoted by federally backed lenders) prevented white homeowners from selling to people of color; local zoning codes forbade the construction of more affordable multifamily housing near better jobs and schools. Richard Rothstein's influential review of this history, including examples from Austin, explicitly argues that racial divisions in our society are not rooted in individual attitudes but are the desired result of choices made at every level of government. – A.S. 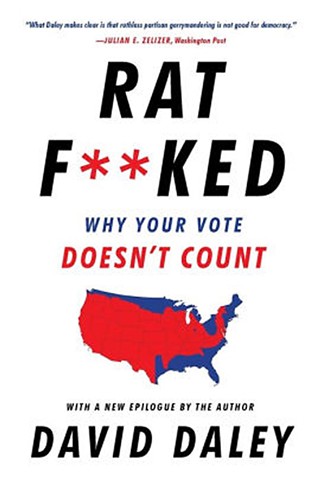 Ratf**ked: Why Your Vote Doesn't Count

Brushing up on the GOP's legacy of gerrymandering with David Daley's 2016 book is apropos as the Texas Legislature prepares for its once-in-a-decade task of redrawing districts in the session beginning in January. Daley, former editor-in-chief of Salon, unpacks the Redistricting Majority Project, or REDMAP, a project launched by Republican operatives in 2010 to exploit the redistricting process in blue and purple states in an effort to gain more seats in Congress. Sounds familiar, huh? – B.S. 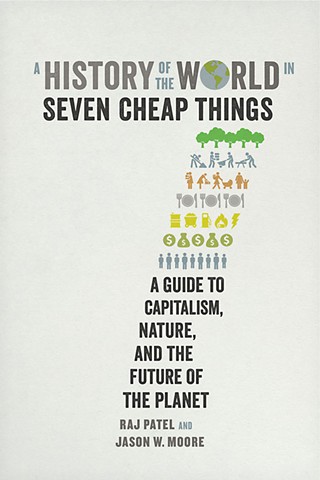 A History of the World in Seven Cheap Things: A Guide to Capitalism, Nature, and the Future of the Planet

Raj Patel is Austin's resident climate and food systems expert, currently teaching and researching at UT's LBJ School of Public Affairs. Educated at Oxford and Cornell, the British transplant is an expert on how food systems, politics, and the environment intersect. He's written many books and articles and even hosted podcasts that'll tickle the fancy of anyone looking to learn more about where their food comes from; this book, co-written with Jason W. Moore, is a great starting point. As you can see from his explanation of how the chicken nugget heralds the end of capitalism, Patel is not only knowledgeable but a great teacher, breaking down complex systems like global markets and environmental politics into manageable chunks. Available at BookPeople – whatever you do, please don't buy this from Amazon.– L.F.