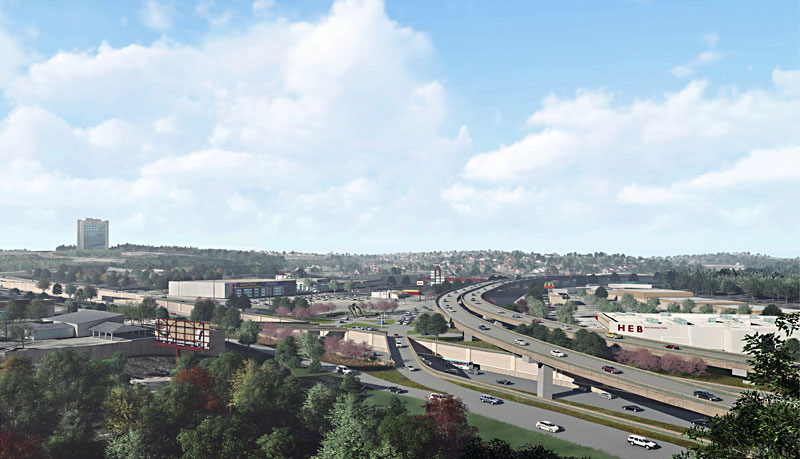 A majority of Austin's elected leaders on the City Council and Commissioners Court, along with environmental groups like Barton Springs Conservancy, Clean Water Action, Environment Texas, and Save Our Springs Alliance, have adopted trees in Southwest Austin as a strong symbol of public pushback to the Texas Department of Transportation's proposed Oak Hill Parkway. That project would build 12 lanes of excavated and elevated highway to replace the 1.1-mile stretch of U.S. 290 and TX 71 that includes the landmark Oak Hill "Y." The Save Barton Creek Association, along with other environmental and neighborhood groups and residents of Oak Hill, scored a major victory last Tuesday in their lawsuit to stop the project, with a court ordering TxDOT to enter mediation with the plaintiffs.

A compromise has yet to be reached, but it's clear the community considers the project a serious threat to Oak Hill. "The biggest issue with the TxDOT design is that it's overbuilt – that really causes all the other issues," says Angela Richter, executive director of SBCA. "It's adding 74 new acres of impervious cover within the Barton Springs/Edwards Aquifer recharge and contributing zone, so a whole lot more pavement for pollutants to run off and potential flood impacts downstream."

Recent studies also suggest that pollution from the highway construction itself could reach Barton Springs in as little as a day. "That portion of Williamson Creek ... goes underground into the Barton Springs/Edwards Aquifer and comes up in the pool," says Richter. "So that causes great concern [about] sedimentation coming off the project and the cloudiness we would expect to see in the pool for the five-plus years that construction's going on. Also if there were ever to be, say, a spill of a truck that has a hazardous chemical in it, that would really affect the pool and [its] endangered species as well," including the Barton Springs and Austin blind salamander, both endemic to the aquifer zone.

Another issue is the removal of trees: 114 designated as "protected" under the city's tree ordinance, 137 "heritage" trees, and 37 "legacy" trees. Many of these have been adopted by the elected officials and other community supporters. Christy Williams, recently elected to the board of the Barton Springs/Edwards Aquifer Conservation District, says the riparian buffer plays an important role in protecting the aquifer from pollution naturally: "The trees that are in the area now do a lot of filtration of the water before it gets into the aquifer."

Recent studies suggest that pollution from the proposed Oak Hill Parkway construction could reach Barton Springs in as little as a day.

Williams says not all highway projects have threatened the local environment so egregiously. The Oak Hill Parkway project falls outside the jurisdiction of the BSEACD board, but it has had legal authority to intervene in other cases to protect the aquifer. "Those highways were built with a lot of oversight because of a consent decree that, among others, the district was included in; that same authority does not apply to this project. But there [are] wonderful examples very locally of how highway projects could be done better" – such as the Slaughter and La Crosse intersections along MoPac, currently under construction – "to have less impact on the aquifer."

On top of its myriad environmental risks, TxDOT estimates the Oak Hill Parkway would cost around $700 million, a number that's steadily increased since the project was first conceived in 2011; when it received federal approval two years ago, the total project cost was $545.3 million. The alternative proposed by SBCA and backed by Oak Hill residents is the Livable Oak Hill plan, which, according to a press release last week, "would save millions ... preserve Williamson Creek as a greenbelt park," and of course save those trees.

"There are four cross streets across the project area," Richter explains, including William Cannon and FM 1826, "and TxDOT's plan is to keep those at grade; that's why they're excavating and elevating the mainlanes." The Livable Oak Hill plan calls for the reverse, she says. "It's a lot cheaper and less destructive to basically keep the highway at grade and then just have bridges at those four cross streets."

That means "Livable Oak Hill does not have the excavation and elevation, [which is] really supported by the neighborhood," Richter continues. "They're concerned about the sound and the view of the elevated section, and about the flood risk of driving through [what is] essentially a tunnel in a flood-prone area of the excavated section."

The Livable Oak Hill plan also eliminates TxDOT's proposed access roads, which would encroach on Williamson Creek and create much of the Parkway's new impervious cover. "There are not many businesses in the [environmentally] critical half-mile of the project where we're proposing limiting access," says Richter. Instead of the frontage roads, the alternative plan proposes a local boulevard.

In a press release last week, council member Greg Casar, one of the notable tree ­adopters, said of the project, "Our future is one of truly meaningful public transportation, one where we finally have a citywide mass transit system serving Austinites of all incomes and backgrounds. It doesn't make sense to spend so much money on a large, outdated highway design through this environmentally sensitive area."

Mayor Apologizes for Lack of Communication as 120,000 Austinites Are Still Without Power
Austin Energy "cautiously optimistic" about power restorations