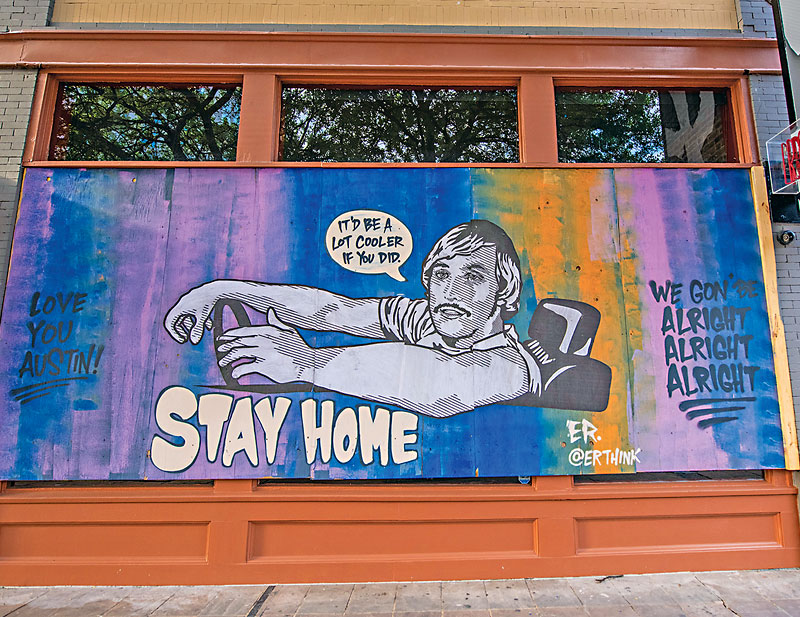 Just in time for Thanksgiving, Austin Public Health announced last week that the city and county have moved into Stage 4 of the local COVID-19 Risk-Based Guide­lines. Officials urged residents to recommit to avoiding gatherings as the holiday season begins. "Thanksgiving is a time where, for COVID-19, we are going to be the most vulnerable," said Interim Health Authority Dr. Mark Escott on Nov. 19. "It's effectively Labor Day and Memorial Day and Indepen­dence Day all combined into one big event."

The announcement came as Austin sees significant increases in new COVID-19 cases, hospitalizations, and ICU admissions. Weeks earlier, Escott had warned the community that those trends would likely prompt a move to Stage 4, especially since the benchmarks for entering that more restrictive phase of pandemic response were revised downward. Austin Public Health and its partners, including UT-Austin's COVID-19 Modeling Consort­ium, had formerly set the Stage 4 threshold as a seven-day moving average of 40 new hospitalizations; it has now been lowered to 30. As of Nov. 24, when the Chronicle went to press, this metric stood at 35.

The revision, said Escott, is an effort to avoid overwhelming Austin hospitals, whose staffing levels are sufficient to handle a surge capacity of 200 ICU beds. (Space and equipment are in greater supply, enough for 350 patients in intensive care with added staffing.) Hours after APH's press conference, Ascension Seton, Baylor Scott & White Health, and St. David's HealthCare issued their first joint statement on hospital capacity in the Austin metro area since late August. As of Nov. 19, 78% of their staffed beds are full, with 84% of their ICU beds occupied.

APH urges businesses to operate at 25% or 50% capacity to help mitigate the now mostly uncontrolled spread of the novel coronavirus. If steps are not taken now to again "flatten the curve" of new infections, Escott warned, "we can be in Stage 5 territory in just a few weeks."

Contact tracing suggests that most of the transmission leading to the current increase in COVID-19 cases is happening in social gatherings between people not living together. In Stage 4, everyone, regardless of risk, should avoid nonessential travel. Higher-risk individuals (those over the age of 65 and those who have chronic medical conditions) are encouraged to avoid nonessential dining and shopping, as well as any gatherings of more than two people. All others should avoid gatherings of more than 10.

Chief among APH's concerns are bars that have reopened for dine-in service. In mid-­October, Governor Greg Abbott permitted bars to reopen pursuant to county judge approval, and while Travis County has yet to reopen bars, an emergency rule adopted by the Texas Alcoholic Beverage Com­mission in August means bars can apply for food and beverage certificates if they serve food on-site, thus legally classifying them as restaurants that are allowed to reopen.

Escott said such establishments will be the focus of enforcement efforts when APH sees "some patterns of misbehavior and lack of attention to the guidelines." It's important that the bar industry works to make things safer, said Escott, but the fact remains there's a high level of inherent risk. "We know the nature of a bar is that people are drinking alcohol, people are often face to face, and those two things combined for this pandemic creates a scenario that is very dangerous," said Escott.

Local officials in Texas can only recommend business capacity limits; they can't mandate them. That authority ultimately resides with Abbott, who last week said there will be no more COVID-19 statewide lockdowns, despite Texas' new hospitalizations and positivity rate approaching the levels that spurred Abbott to close bars and reduce restaurant capacity earlier in the summer.

If Austinites don’t take aggressive measures to stop the spread of COVID-19, warned Interim Health Authority Dr. Mark Escott, “we can be in Stage 5 territory in just a few weeks.”

Pursuant to Abbott's Oct. 8 executive order, counties may only reduce the capacity of most businesses from 75% to 50% if COVID-19 patients exceed 15% of the Trauma Service Area's hospital capacity for seven days (TSAs are comprised of several counties). As of press time, COVID-19 patients account for 5.9% of the Austin TSA's hospital capacity, according to data tracked by The Texas Tribune. COVID patients make up more than double that 15% benchmark in the El Paso and Lubbock-Amarillo regions, 38.4% and 40.1%, respectively.

Acknowledging the crisis in those regions, where the state has sent hundreds of health care workers to overworked hospitals, Austin Mayor Steve Adler spoke to "dark clouds gathering" in Tarrant and Dallas counties, as Houston and San Antonio are also reporting a rise in COVID-19 cases. "Unless we can slow our numbers, the governor won't have enough extra health care professionals for the growing need in the state," said Adler. "I expect the governor to act appropriately if that time comes, but we're not there."

A day after Austin and Travis County went to Stage 4, Austin ISD announced it might go virtual after the holiday. On Friday, Nov. 20 – the last school day before Thanks­giving – the district said it was "evaluating the option of temporarily transitioning to remote-only instruction" for the week of Nov. 30 and said it would make a decision by Wednesday, Nov. 25.

At the Nov. 19 press briefing with Escott, Adler expressed concerns about that week in particular. Families who travel for Thanks­giving against Austin Public Health guidance, he said, "should think about whether ... it's appropriate or right to send [their] children to school that first week coming back." Teachers who spoke to the Chronicle said they worry about potentially being exposed by students whose families are traveling or hosting large dinners for the holiday.

The move would affect the 24% of AISD students who are attending school on campus, a percentage that is much larger at some elementaries. While Escott said Austin is "not seeing transmission in the classroom space," he noted the virus is spreading between students in unmasked settings, such as social gatherings and extracurricular sports. He recommended stricter masking and social distancing policies, along with limiting attendance at athletic events.

Although Escott did not recommend campus closure, the Texas Education Agency recently released new guidelines that make it easier for districts to close campuses as a preventive measure. The state now offers half-funding, instead of no funding, for virtual learning days at schools without confirmed COVID-19 cases.

Ken Zarifis, president of Education Austin, said the union had encouraged the district to keep students virtual for the week after Thanksgiving. He called the half-credit policy "a tremendous insult" to employees who work full-time to teach from home.

"We are all working, and the students are working, harder than I think they ever have, ever," said middle school science teacher Tania Tasneem. "So why does remote teaching count at 50 percent?"