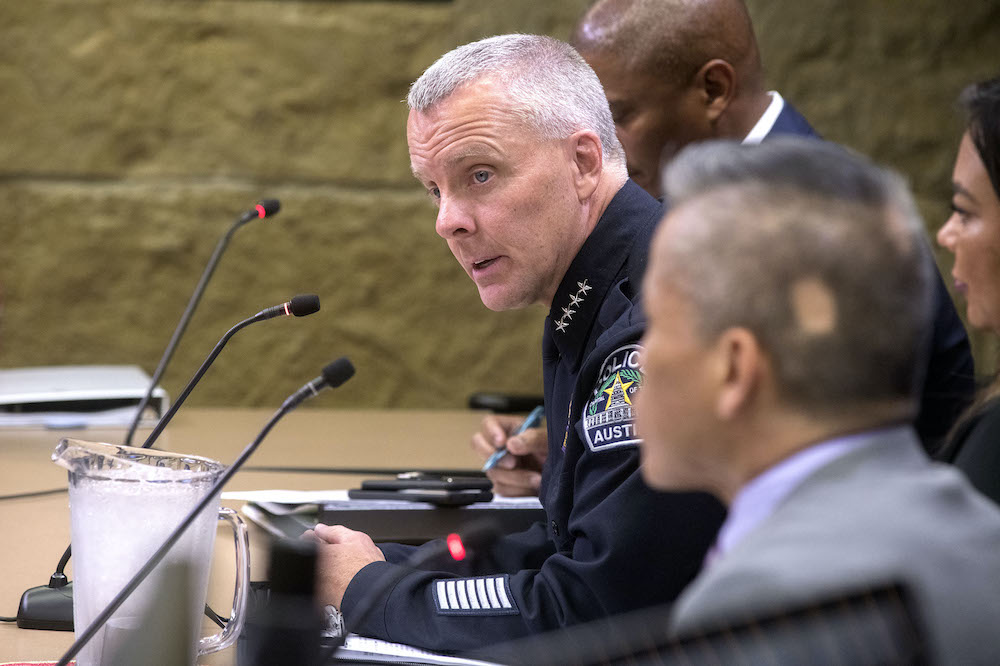 Austin Police Chief Brian Manley has indefinitely suspended (that is, fired) Officer Daniel Castelline for sending racist text messages to fellow officers. In a Nov. 5 memo to city officials, Manley said Castelline had violated APD policies requiring officers to treat the public courteously, had disrespected his co-workers, and had brought discredit to the department.

APD's Internal Affairs division began investigating Castelline in the spring of 2020 after text messages between him and two former officers came to light during an unrelated investigation. The text thread begins after officers are sent to address complaints about a man named Phuoc Pham and includes the following exchange:

Officer Castelline: We're definitely getting corona. And it'll be that bastard phuc pham.

Former Officer 1: Lol Yup! he's the one who actually started it

Former Officer 1: No just being truthful

Former Officer 2: Kind of afraid of catching the corona. A Lot of Slants over here

In concluding the exchange, Castelline sent a meme of the actor George Takei with his hands over his face and the words "Oh my."

According to Manley's memo, when Castel­line was interviewed by Internal Affairs he claimed to be shocked by the messages from Former Officer 2, particularly the phrase, "A Lot of Slants over here." Manley writes that Castelline "repeatedly blam[ed] 'Former Officer 2' for most, if not all, of the thread." However, Manley notes that Castelline never confronted or reported the former officers. Instead, he revived the thread nine days later.

This time, Castelline sent a message that he said was meant to poke fun at APD detectives forced to work patrol, with a meme showing an African American man wrapped in white sheets and presented as though he were being supplied oxygen in a hospital. Former Officer 2 was offended by the meme, writing in response, "That's not funny. This man has suffered enough through institutionalized racism and fought hard to rise above it and make something for himself and his family, only to have the white devil Castelline try to put him back in chains."

Castelline told Internal Affairs investigators that he hadn't considered the racial component of his message offensive or particularly meaningful and again blamed Former Officer 2 for making it an issue. "His lack of acceptance of full responsibility is very troublesome to me," Manley wrote. "Calling Mr. Pham a 'bastard,' whether it be to his face or behind his back, is unacceptable behavior and shows a complete disregard for the impartial attitude and courtesy that APD officers are required and expected to show to all persons. Moreover, his comments and inferences can also be seen as insolent and abusive towards Detective co-workers and co-workers of Asian and African American [descent]."

The issue of racism in APD's ranks has been simmering since the fall of 2019, when then-Assistant Chief Justin Newsom abruptly resigned, perhaps concerned that his own text messages were about to be made public. Anonymous allegations that the messages contained uses of the N-word sparked an independent investigation, conducted by former Bexar County prosecutor Lisa Tatum. She was unable to verify the specific allegations against Newsom, but her report includes corroboration that Newsom and other APD officers used racist language and harbored homophobic views. The report, issued last April, includes anecdotal evidence of racism, sexism, and homophobia at APD described by witnesses as having persisted for years.