County Drops Most Charges Against Protesters 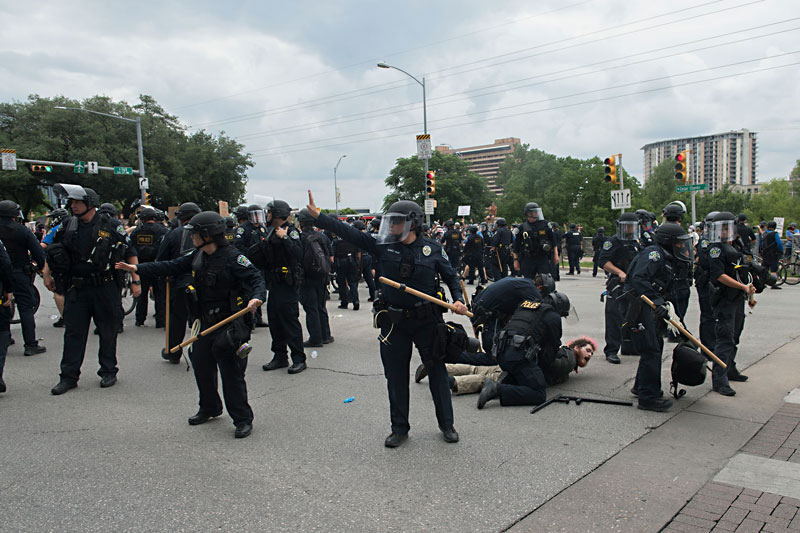 APD and protesters clash on May 31 (Photo by John Anderson)

After a months-long review, outgoing County Attor­ney David Escamilla has decided to throw out a majority of the charges related to this summer's Black Lives Matter protests. He will also be tossing charges stemming from arrests at the International Working Wom­en's Day protest on March 8 and the May Day March on May 1, he told the Chronicle earlier this month.

Escamilla's decision will affect 104 of the 178 people arrested at the protests. By his estimation, those 178 have been charged with 236 crimes, most of them low-level ­offenses like obstructing a highway, a class B misdemeanor punishable by six months in jail and a $2,000 fine.

Escamilla explained the formula he used to determine which cases would be tossed: "I emphasized to my prosecutors that where there wasn't violent activity, where there wasn't a pending felony case ... and if [the protesters] haven't been re-arrested in three months, then we just reject [the charges]. Unless there's any aggravating factors, we just reject, and so that's what we've done."

The number of rejected misdemeanors could have been even higher, but under Travis County's bifurcated system, Escamilla is not yet able to consider cases against the 51 protesters who picked up both felony and misdemeanor charges. The District Attorney's Office addresses these cases first; they are in limbo, waiting for District Attorney-elect José Garza to take office in January and make decisions on them.

Additionally, four protesters charged with misdemeanors pleaded guilty and took time served to get out of jail. Doing the math, that leaves 19 cases that Esca­milla is still considering. "Anything could happen with those," he said. "We could go on with a more traditional type of deferral, [or] we might reject them when we look further at the evidence, and some of these have to do with damage to property, so we might have to deal with restitution. They're just more complicated."

Attorneys for the protesters have emphasized the importance of being able to expunge the records of the arrests so that protesters won't be forced to answer "yes" on job and housing applications when asked about pending court cases. Escamilla acknowledges that defendants won't be able to expunge their arrest records if they take plea deals admitting guilt to reduced charges. His goal, however, is to keep most of those charged from having to admit guilt or even go to court. "Our traditional deferred disposition doesn't result in a conviction or adjudication," he said. "Our goal is to avoid conviction so you can expunge, to help you expunge so you can move on with your life, so you can still get a job, still get an apartment."