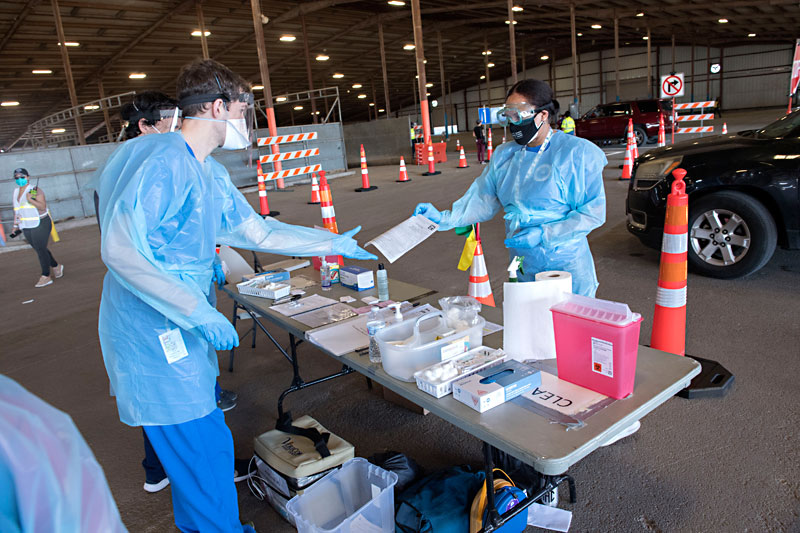 Austin may be on the precipice of a second surge of COVID-19, but it could be avoided if residents are vigilant about practicing social distancing and wearing face masks in the next several weeks, urge local health officials.

"Right now we can certainly be at a time where what we're seeing is the beginning of a second surge," Interim Health Authority Dr. Mark Escott told reporters on Monday. In terms of cases, hospitalizations, and intensive care unit admissions, Escott said Austin is at a similar spot to where it was in mid-June, about two weeks before Austin hit its peak during the first surge of the novel coronavirus.

“If you have anybody that’s coming to your home, whether they are a family member or close friend, you have no certainty of where they’ve been or who they’ve been exposed to.” – Dr. Janet Pichette, APH chief epidemiologist

"If we don't increase our vigilance as a community right now, then Thanksgiving is gonna look bad, and Christmas may look worse," warned Escott.

Over the past month Austin has doubled its moving averages for new cases, hospitalizations, and ICU admissions from lows recorded in October. In the past week alone new cases have increased by 60%, said Escott in his weekly update to the Travis County Commissioners Court on Tuesday. In fact, Monday's new case count – clocking in at 214 – marked the first time in two months that Austin had reported more than 200 cases in a single day.

These indicators determine the staging under Austin Public Health's COVID-19 Risk-Based Guidelines, with the primary indicator being the 7-day moving average of COVID-19 new hospital admissions. As of Nov. 10, that figure was 26, and the UT COVID-19 Modeling Consortium predicts it could exceed 40 by Thanksgiving. Currently Austin is at Stage 3 out of 5 – where we've been since the end of August – but Escott said APH is considering "revising down" the qualifying threshold for Stage 4, which has been set at 40.

Escott explained the consideration comes down to the demands on health care staffing of a possible increase in hospitalizations and ICU admissions. Currently Austin's ICU bed capacity is 350. At the height of the crisis over the summer, Austin's ICU admissions hit 175, but even then (at 50% capacity) hospitals were under significant stress, said Escott. That stress, he clarified, was not due to lack of hospital space nor equipment like ventilators, but rather staffing.

"There's lots of space in hospitals; there's lots of equipment; we have more ventilators locally than we anticipated we would ever need. But we don't have the people," explained Escott before the commissioners. "So where are those people now? Why can't we get those people? Because those people are in El Paso, and Lubbock, and Amarillo, and Dallas. They're in other states around the country who are facing substantial surges already."

Without the appropriate staffing for 350 ICU beds, Escott said, "It's more likely that a surge capacity of 200 beds for the ICU is more reasonable."

Transitioning to Stage 4 within the next two weeks, in an effort to again "flatten the curve" of a spike in new infections, could be a possibility if conditions don't improve right now, said Escott. In Stage 4, everyone, regardless of risk, should avoid nonessential travel. Higher-risk individuals (those over the age of 65 and those who have chronic medical conditions) are encouraged to avoid nonessential dining and shopping, as well as social gatherings and any gatherings greater than two people. All other individuals should avoid gatherings of more than 10 and are safe to shop and dine only at "expanded essential businesses." Escott has also floated the idea of lowering restaurant capacity if conditions don't improve quickly. (Per Travis County Judge Sam Biscoe's Nov. 10 order, bars will remain closed until his tenure ends on Nov. 17, after which the decision will fall to county judge-elect Andy Brown.)

Austin's communities of color continue to be disproportionately impacted by the pandemic, with significantly higher positivity rates and hospital admissions. As a measure of how widespread infection is in a specific population or area, the positivity rate – the overall percentage of tests that come back positive – helps indicate levels of transmission as well as whether testing efforts are adequate. Austin's Latinx community reported last week the highest positivity rate at 9%, followed by Hawaiian/Pacific Islander residents at 8%, and Black Austinites at 6.9%. Ideally, said Escott, APH would like to see positivity rates below 3% for all races and ethnicities; Austin's overall positivity rate has increased to 5.3% after hovering consistently around 3.8%-3.9% for the last six weeks.

Recently more than half of those who have tested positive for COVID-19 are between the ages of 20 and 39, which suggests a higher level of transmission within that age group. "Our concern is that those individuals are increasing their positivity because of increased social activities," Escott told the Commissioners Court. APH is urging people who attended social gatherings over Halloween weekend to get tested and self-isolate, as their risk of having been exposed to the virus is that much greater as active cases continue to climb.

At Monday's press briefing, Dr. Janet Pichette, APH's chief epidemiologist, urged Austinites to avoid inviting any guests living outside of their households into their homes, especially as the holidays approach. "If you have anybody that's coming to your home, whether they are a family member or close friend, you have no certainty of where they've been or who they've been exposed to," said Pichette.

Escott called Pfizer's news "encouraging" but was ultimately cautious. "I'm certainly hopeful that the eventual efficacy will be greater than 50%. I would hesitate to think that it would be as much as 90%, but we could get lucky."