Historic Hometown GOTV: Travis County voters turned out in record numbers for the November general election, with the unofficial final total sitting at 607,354. Provisional ballots and mail ballots postmarked on Election Day still need to be counted, so the number will likely increase. The current total represents 70.45% of registered voters in the county, the highest percentage turnout since 1992 when 78.25% of voters turned out. (Photo by David Brendan Hall) Austin Public Health and students of Dell Medical School set up a display Thu., Oct. 29, outside of the Long Center for Performing Arts with 450 candles to remember Austin-Travis County residents who had died from COVID-19 as of Oct. 29. As the Chronicle went to press Wed., Nov. 4, Travis County health officials reported six additional deaths since the candlelight memorial, bringing Austin-Travis County's death count to 456. (Photo by Jana Birchum) 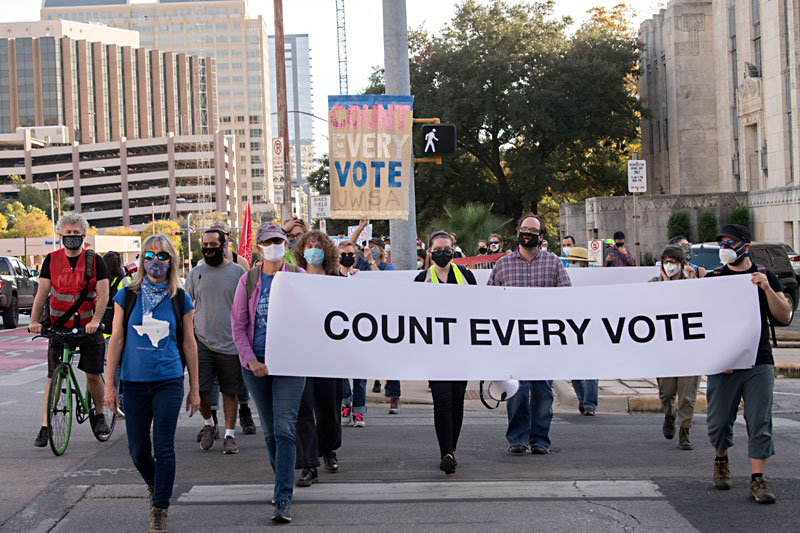 Approximately 100 demonstrators marched from Wooldridge Park through Downtown Wednesday afternoon (Nov. 4) as part of the Rally to Defend Democracy organized by a local coalition including Austin Democratic Socialists of America, Indivisible Austin, Austin Justice Coalition, and the Texas State Employees Union. Marchers called for the fair and complete count of ballots in the wake of President Trump's series of false claims of election victory and fraud. (Photo by John Anderson)

Is It ... Over? As the Chronicle goes to press, Joe Biden stopped short of declaring victory in a Delaware address but said it was "clear" he would reach the 270 electoral votes needed to become the 46th U.S. president – and as of this writing, if every state's current results hold up as the counting continues, Biden will have exactly 270 electoral votes.

FBI Investigating Trump Train: The Federal Bureau of Investigation is looking into the alleged harassment of a Joe Biden/Kamala Harris campaign bus by Trump supporters as the bus drove down I-35 near San Marcos last Friday. In a crass if unsurprising move, Trump later tweeted a video of the incident, writing, "I LOVE TEXAS!"

RENT Program Expanded: After struggling to distribute the $15 million City Council set aside for rental assistance, changes have been made to the RENT program. Now all qualifying renters can apply for up to six months of rent payments, including overdue and future payments between March 1 and Dec. 31 of this year. The city will also now hold a lottery to select recipients every Friday at noon until all funds are expended or they expire on Jan. 1, 2021.

The Price of a Pandemic: The COVID-19 crisis has cost Austin $450 million, according to the city's recently launched "COVID-19 Fiscal Dashboard" tracking the city's pandemic response spending. Through September, $237.9 million of the $450 million has been committed so far to the city's 21 response programs, leaving some $212 million remaining. In May, Council approved an initial spending framework of $271.6 million.

UT-Austin staff reported witnessing or receiving information about 1,052 reports of possible sexual harassment, sexual assault, dating violence, or stalking between January and August of this year, according to a report released last week from UT President Jay Hartzell. Of those reports, 112 have resulted in investigations, with only 10 leading to disciplinary actions. – Julie Oliver, in a statement on her loss to Republican incumbent U.S. Rep. Roger Williams in Texas’ 25th Congressional District