Getting Out Austin’s LGBTQIA Vote With Pride at the Polls 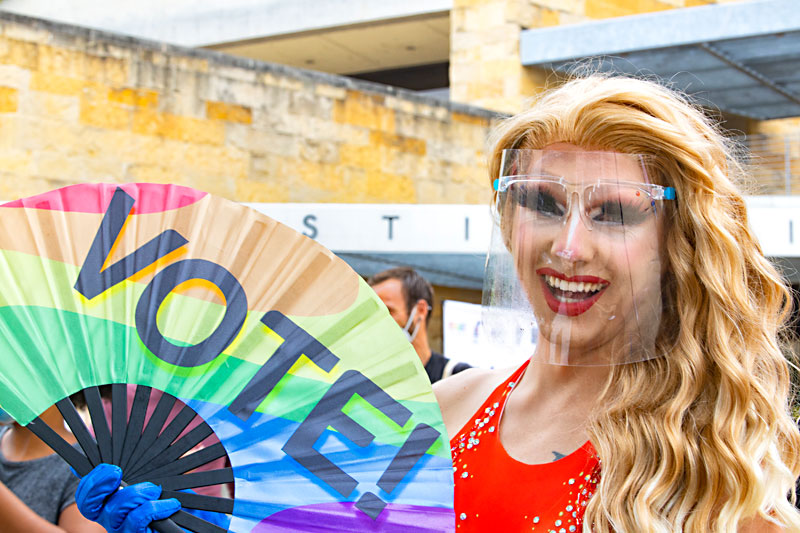 From the Stonewall riots to today's alternative DIY iterations like QueerBomb, celebrating Pride has meant making a statement: We're here, we're queer, and we will be heard. Still, every time Nathan Manske found himself in the middle of a Pride parade, his mind always returned to the same question: Sure, we might be here and queer, but did everybody here vote? "You can't only have the celebrating part, you have to do the work, and the work, I think, deters so many people from voting," explained Manske.

That's why Manske, founder of the online queer story archive I'm From Driftwood, organized last Satur­day's Pride at the Polls, a day dedicated to getting out the LGBTQIA vote by encouraging folks to vote early at the Central Library while drag performers, speakers, and local activists kept the Pride spirit alive outside City Hall. "I wanted to show that voting doesn't have to be this dreadful, awful thing. ... This is what voting can look like, and even more important, this is what voters look like," Manske told me as we watched local drag performers Diamond Dior Daven­port, Amber Nicole Davenport, and the Beckies walk down Cesar Chavez to cast their ballots following their performance Saturday. As Manske sees it, many community members don't see themselves as belonging at the polls – he hopes Pride at the Polls changes that.

Down the road at the Central Library I met the David­son sisters, Aubrey, Kelsi, Shea, and Kate, all of whom voted early that day whilst decked out in rainbow gear. Voting has always been important to the four, but 2020 is different. "Both because of the gravity of the election and of the issue and the worry of voter suppression," said Shea.

"I've never been as outspoken about voting as I have been this year," added Kate. "We have to be loud, like it's not an option to be quiet anymore."

For local drag king Alexander the Great, he's taken his civic duty one step further this election by working as a Travis County elections poll worker for the first time. Alexander, who performs in the drag king troupe Boiz of Austin, partly credits pursuing the position to "a lot of frustration with our administration," he told me outside City Hall. Organizing, protesting, and raising money are all ways to effect progressive change, reminded Alexander, but voting can't go ignored by public officials. "This is literally the one moment where officially our government has to hear us out."

With so much on the line for queer and trans rights with this year's general election, mobilizing the LGBTQIA vote – and the qmmunity's many intersecting identities – is vital, stressed many of Saturday's speakers. "Over and over and over again, they're trying to roll back the clock to a time where it was dangerous to be out and proud of who we are," Jessica Soukup, a trans activist and public speaker, told the crowd outside City Hall, in reference to both the state and national governments' attempts to strip queer and trans Americans of protections in health care access, public accomodations, and other realms.

"It doesn't have to be this way," urged Soukup. "It is possible for us to live every day without looking over our shoulders. We can expect more from our governments.

"All of this won't be solved tomorrow, it will be a journey," said Soukup. "But that journey begins with your vote today."