Election Ticker: Getting Out the Vote and Then Some 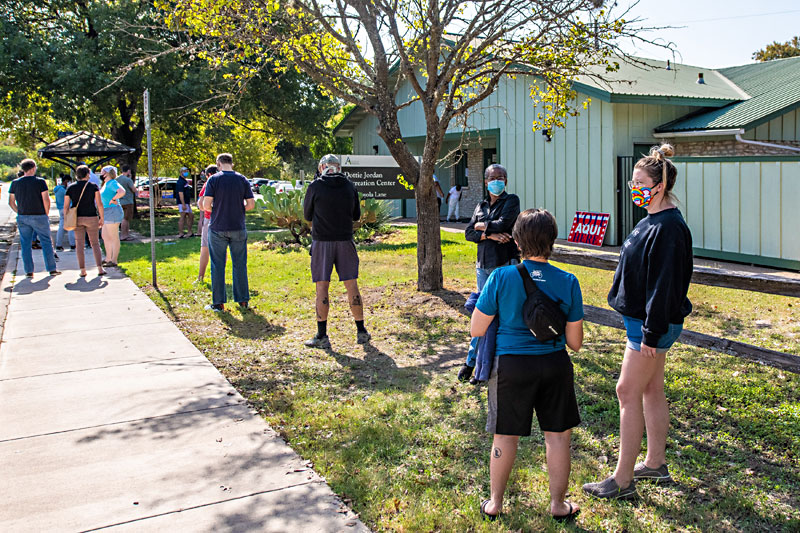 More than 35,000 voters turned out at Travis County polls on the first day of early voting in Texas. According to the Travis County Clerk's Office, 35,873 Travis County residents voted in person Tue., Oct. 13, just a hair under the 35,958 voters who voted in person at EV and mobile polling locations on the first day of early voting in the 2016 general election. (2020 marks the second year without mobile voting, thanks to the Texas Legislature.) However, the clerk has also received 22,577 mail-in ballots as of Oct. 13, more than double the comparable number from 2016. Elsewhere in the state, records from 2016 are being shattered; in Harris County alone, the more than 128,000 first-day votes exceeded the first-day turnout in the entire state of Georgia.

Tax Assessor-Collector Bruce Elfant also noted that a record-breaking 97% of the county's eligible voters are registered; that translates to 17% more potential voters than in 2016. The Texas secretary of state's data shows that 1.3 million more Texans have registered in the last two years; accounting for voters who've left the rolls, the Texas Demo­cratic Party estimates nearly 3 million registered voters today were not registered in 2016. That's nearly one in five of all Texas voters.

The TDP, pointing to recent external analysis showing 60% of these new voters are under 25 or people of color, hopes this electorate delivers Democratic victories up and down the ballot. Executive Director Manny Garcia said in a statement, "Texas is the biggest battleground state because Texans are rising up and demanding change. ... As one of the youngest and most diverse states in the country, the electorate in Texas has fundamentally shifted over the past few years. ... Texas Democrats have built a winning coalition of voters because we have earned the trust of Texans."