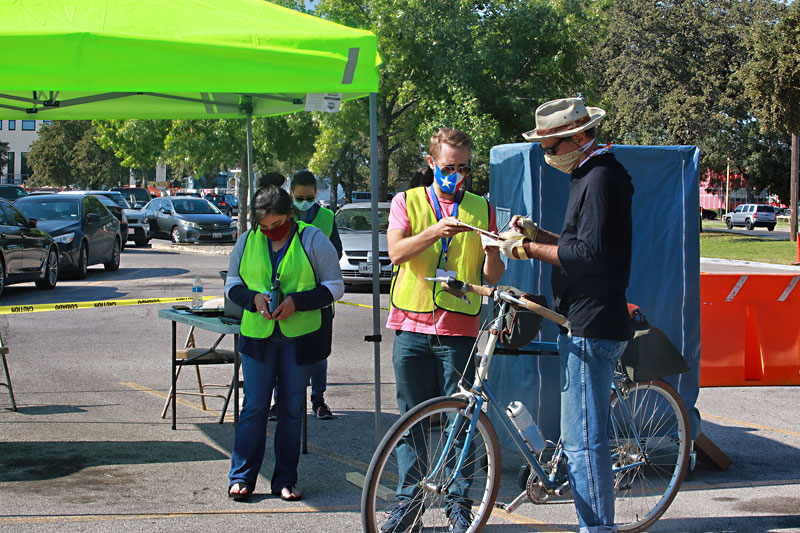 Following Governor Greg Abbott’s Oct. 1 proclamation limiting ballot drop-off locations to just one per county, the Travis County Clerk’s Office on Airport Blvd. is now the only site where voters may hand-deliver their ballots in Travis County. Abbott’s order – which has been put on blast for blatant voter suppression – is now the subject of three separate lawsuits. See "Lawsuits Flying as Abbott Curbs Ballot Boxes." (Photo by Jana Birchum)

Abbott Ok's Bars Reopening: Governor Greg Abbott announced Wednesday that bars can begin reopening at 50% indoor capacity on Oct. 14, but only with approval from county officials.

Police Oversight Project, a new political action committee, is collecting petition signatures to repeal Chapter 143 of the Texas Local Government Code, which limits procedures on police officer discipline and oversight. In order to get it on the May 2021 ballot, the petition will need to collect around 60,000 signatures, according to the group's estimates.

Inkling of Fraud: According to the Office of the City Auditor, Randall Whited, a former Austin Public Library employee, stole at least $1.3 million from the city by purchasing printer toner with a city credit card and reselling it online.

University of Texas Professor Mario Villarreal has been charged with five counts of possession of child pornography. According to university officials, Villareal, who worked at the Salem Center for Policy at UT's McCombs School of Business, has been placed on agency investigation leave and removed from all teaching and administrative duties.

Eviction Moratorium: Mayor Steve Adler extended the city's ban on landlords issuing "notices to vacate" until December 31. Specifically, the new order bans evictions only against residential tenants whose monthly rent is no more than $2,475.

Slow Healthy Streets: Austin's Transportation Department has begun the process of phasing out segments of the Healthy Streets program, a city initiative that closed select streets to through traffic in an effort to provide space for outdoor recreation and safer commutes for nondrivers. The findings will help inform a new "slow streets" pilot addressing Austin's sidewalk network.

Choo, Choo, Who? Austin Parks Foundation announced the seven finalists of the Zilker train naming competition, including "Edwina Justus," the first Black female engineer for Union Pacific Railroad, and "The Zilker Zanate" (Spanish for grackle), among others. Voting for the new name is open on www.austinparks.org/zilker-train through Nov. 6. "I want to help our artists and restaurants as much as we possibly can, but can we say with a straight face, in front of a judge, that a thousand businesses across the city are Visitor Information Centers?"