Races south, west of town too close for Democrats’ comfort 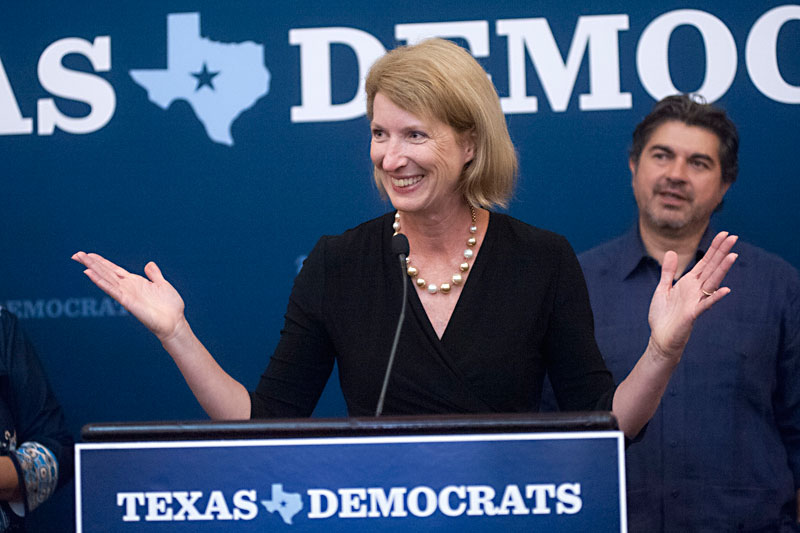 The ultimate goal for Texas Democrats is to flip the Texas House in November – only nine seats to go – but those south and west of Austin must first fight just to keep their blueberry in the tomato soup. The races for House Districts 45 and 47, both of which went Democratic in the 2018 election for the first time since 2010, each feature strong challengers aiming for a GOP comeback. Mean­while, Precinct 3 on the Travis Coun­ty Commissioners Court, which largely overlaps with HD 47, is open with the retirement of the county's last GOP elected official, Gerald Daugherty, and his party would dearly like to hold on to that seat.

With redistricting on the agenda for 2021, "Texas Democrats' only hope ... is to take control of the Texas House," says Mark Jones of Rice Uni­ver­sity's Baker Institute of Pub­lic Pol­icy. But "if the Texas GOP can retain its House majority, it will be able to draw tailor-made legislative districts that will increase its prospects of retaining control of the Texas Senate and House during the next decade as well as increase the odds of the GOP retaking control of the U.S. House."

The ultimate goal for Texas Democrats is to flip the Texas House in November – only nine seats to go – but those south and west of Austin must first fight just to keep their blueberry in the tomato soup.

In HD 45, which covers Hays and Blanco counties, Rep. Erin Zwiener, D-Driftwood, has made waves in her first term, serving on the House's main environmental committee and passing legislation to protect groundwater, reduce night-sky light pollution, and mitigate flooding, all major issues in her district. Hays County, which includes San Marcos, Buda, and Dripping Springs, is among the top 10 fastest-growing counties in the nation, so population growth and its impacts on traffic and affordability, as well as the environment, are always top of mind.

Zwiener was also part of the coalition to pass House Bill 3, last session's historic $11.6 billion public school finance bill that increased teacher pay while cutting property taxes. She says, "That was just a first step – we have a lot of work to do to rebalance the public school funding formula so that the state is paying its full share, instead of passing the buck to property taxpayers."

Challenger Carrie Isaac, wife of Zwien­er's predecessor Jason Isaac (he stepped down to run, unsuccessfully, for Congress), runs a nonprofit that helps disabled veterans find work (though a February Austin American-Statesman investigation raised questions about its effectiveness and ethics). She's endorsed by Gov. Greg Abbott, Texas Right to Life, and the National Rifle Association. On top of the standard GOP agenda of cutting taxes and "protect[ing] the unborn," she's big into "security"; her website says she's "committed to fully funding local police departments," "increas[ing] border security," and "increasing the number of security personnel" in schools.

In HD 47, which covers most of western Travis County, including Lago Vista and Lakeway, Rep. Vikki Goodwin, D-Austin, unseated GOP incumbent Paul Workman in 2018; she introduced environmental and gun control measures in her freshman year, in addition to co-authoring HB 3. In addition to public education, her priorities include raising pay for state employees, mitigating attacks on cities' and counties' local control, and "mak[ing] sure we don't make cuts to any of the important safety net services the state provides." She's endorsed by Sierra Club, Texas AFL-CIO, the Texas State Teachers Association, and abortion rights advocates NARAL Pro-Choice Texas. Her GOP opponent Justin Berry, vice president of the Austin Police Association, seeks police "reform, NOT defunding," lower property taxes, "more roads to keep up with our growing population," and increased mental health services, according to his website.

The same terrain in western Travis Coun­ty will also have a new voice at the Com­mis­sion­ers Court come January, as 14-year incumbent (elected in 2002, defeated in 2008, re­elected in 2012) Gerald Daugherty takes his leave. Democratic nominee Ann How­ard is the former leader of the End Community Homelessness Coalition (ECHO), who prevailed in a four-way primary contest; her GOP opponent, Becky Bray, is a transportation engineer who ran for the District 8 Austin City Council seat in 2014. Daugherty endorsed her in the Statesman a couple weeks ago, saying, "The Commis­sion­ers Court needs at least one person with a sometimes-opposite view from the rest of the court members."

Both Howard and Bray stress the importance of wildfire prevention and water conservation in a precinct that shares many underlying conditions with the fire-prone areas of the West Coast. They differ notably on public safety and criminal justice reform. Howard plans to "shrink the Travis County Correctional Complex" and "end mass incarceration"; Bray points to public safety issues ostensibly created by the homeless population.

They both agree on the need for decongesting roadways, Daugherty's main focus during his tenure, but Bray follows more closely in his footsteps and is vehemently opposed to Project Connect: "The taxes being imposed are just tone-deaf given where we are in this economic crisis."