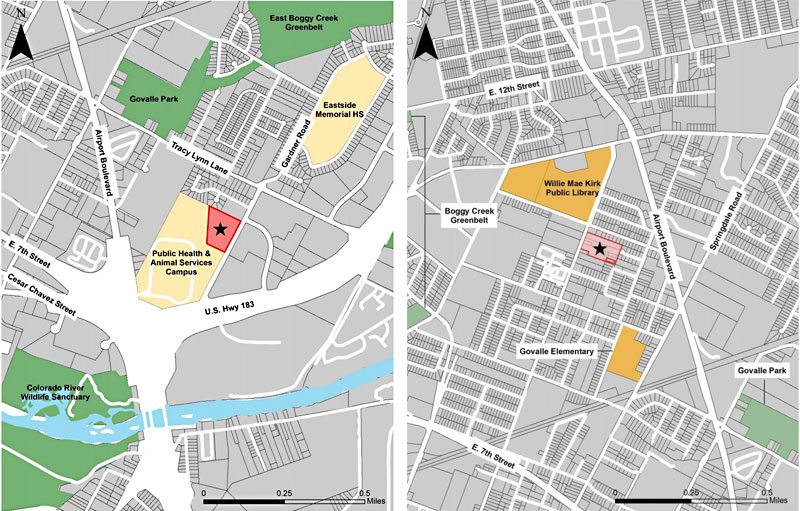 The AHFC Board of Directors voted to enter negotiations with development teams for affordable housing projects at 900 Gardner (left) and 1127 Tillery (right).

When City Council (acting as the Austin Housing Finance Corporation Board of Direc­tors) voted to award an affordable housing development at a city-owned site in East Austin to the Guadalupe Neighborhood Development Corporation, Mark Rogers, who leads the organization, was at home playing Words With Friends. He had the meeting running on a laptop, but he wasn't really paying attention because he didn't expect the vote to go in his favor.

"I was completely stunned," Rogers told the Chronicle on Monday. "I said about 20 times, 'That was crazy.'"

The proposal from GNDC and Vecino Group, a national affordable housing developer, for the site at 900 Gardner came in second place in the solicitation process initiated by the city housing department in June. The scoring panel of city staffers had given a handful more points, and thus its recommendation, to a proposal from DMA Companies – one of Central Texas' larger affordable developers – and Big Medium, the arts nonprofit behind the East Austin Studio Tour. A separate site at 1127 Tillery was recommended for award to MRE Capital and Imagine Art, a local nonprofit that supports artists with disabilities.

“If the city were to have transparently posted how much affordable housing each proposal had two weeks before the vote, people would have debated more the merits of each proposal and less about misinformation.”– CM Greg Casar

The DMA/Big Medium proposal included 219 rental units and more than 26,000 square feet of commercial space – including some for art studios. Just 14 of those units would be rented at market rate; the others would be reserved for people earning no more than 80% of the Austin median family income (about $78,000 for four people), including 30 for people earning just 30% MFI (less than $30,000 for four people).

The GNDC/Vecino proposal offered home ownership options – crucial for the Eastside activists who organized a frenzied campaign to urge Council to give GNDC development rights at both sites (GNDC also submitted a proposal for Tillery). The GNDC-led proposal at Gardner would only build 134 units, but 26 of them would be for sale. The ownership and rental units would also be available to a mix of income levels, including 28 for people earning 30% MFI.

At the end of a long meeting that included speakers levying charges of systemic racism at the arts nonprofits and the housing department, Council Member Pio Ren­te­ria moved to advance negotiations with GNDC and Vecino Group at Gardner. (Both sites are in Renteria's District 3.) "It was a hard choice because the proposals were all good," Renteria told us on Tuesday. "But I knew the neighborhood there wanted more ownership, and the GNDC proposal offers Continuum of Care units" – that is, housing for those exiting or at risk of homelessness.

Council has gotten more comfortable in recent years with overriding staff procurement recommendations in favor of second-­place bidders. But this was the first time the city had embarked on a process like this to award properties the AHFC owns to affordable developers. It won't be the last; in addition to the 6-acre Gardner and 5.15-acre Tillery sites, the AHFC is holding on to 28 other sites (20 of those are single-family homes) that could go through a similar solicitation process for income-restricted housing. The sites are located all over the city and some have projects underway now, so the future of this process is closely watched by people on all sides of Austin's land use debate.

Before accepting proposals, the city outlined scoring criteria that included maximizing the number of affordable units, especially for residents at or below 50% MFI; proposals with more 2- and 3-bedroom units, or with CoC units; and those that minimized subsidy from the city. The chosen developer would also have to implement "right-to-return" rules – an untested city policy to reserve housing units for people with generational ties to the neighborhood who were displaced sometime before 2000.

Despite that guidance, the solicitation process left many feeling frustrated and confused. COVID-19 precautions made it difficult for city staff to engage with residents in the Govalle/Johnston Terrace neighborhood near the Gardner site (two virtual public meetings were held in April and May). The categories in the scoring matrix were ambiguous and undefined; other than the scores, no other information was provided for losing bids. A January deadline to apply for federal tax credits also loomed over the whole process.

That frustration was on display during the public testimony. Organizers with Com­munities of Color United urged supporters to call in to the meeting and demand GNDC be awarded development rights, and Com­mun­ity Not Commodity revved into gear to generate emails to Council. They mischaracterized the staff recommendations as going to just arts groups, rather than partnerships with established housing producers; Big Med­ium and Imagine Art were derided as "white-led" organizations that would accelerate gentrification in East Austin (Rogers, who's led GNDC for decades, is also white, although the nonprofit's board is entirely Latinx).

Despite the off-point attacks, the scoring matrix did overlook some community priorities such as home ownership, Eastside organizer Daniel Llanes told us on Tuesday. "The white establishment is not used to considering the impacts of systemic racism on people of color." City Community Development Administrator Mandy De Mayo basically agreed, telling Council: "The underlying sentiment" of feedback received was that the solicitation process "furthered institutional racism. We did not take into consideration through our process a community preference for a community nonprofit developer."

And important data that could have been used to compare proposals was not revealed until just hours before the vote. The public learned these details – the number of housing units proposed; the mix of bedroom sizes; and the number of units set aside for ownership or rental, or reserved for people at certain income levels – at the same time that Council members did.

Those numbers proved central to the debate. The GNDC plan offers less housing but options for ownership, which can help generate wealth; the DMA proposal would rent to more low-income people while helping house people with disabilities. A case could be made for each proposal – but not without all the data on hand.

Acknowledging that the city's housing staff is dealing with a tremendous workload, CM Greg Casar told us, "If the city were to have transparently posted how much affordable housing each proposal had two weeks before the vote, people would have debated more the merits of each proposal and less about misinformation."

Rosie Truelove, director of the city's housing department, described the solicitation experience as a "learning environment" and said changes would be implemented for the next go-around. She expects unit counts, MFI levels, and other basic aspects of proposals to be released publicly for all submissions – not just the winning bids. She also wants to rethink how the solicitation process is handled at every stage, including the drafting of requests for proposals and what development criteria are prioritized; community engagement; and how proposals are scored. Including Austin's Equity Office in those efforts will be key, she said, while acknowledging that every parcel is likely to go through its own unique process, which will allow staff to consider specific context like site location, the neighborhood history, and the desires of the surrounding communities.

"I'm going to challenge the team to really get a deep understanding of the [historical] significance of a particular part of town," Truelove told the Chronicle. "I want us to think about how each parcel ... can further the goals of the department and the city," such as preventing displacement while addressing Austin's housing shortage. "Land development is not cookie-cutter, and it can't be if we're doing our job to develop affordable housing in a way that honors the history of our communities."