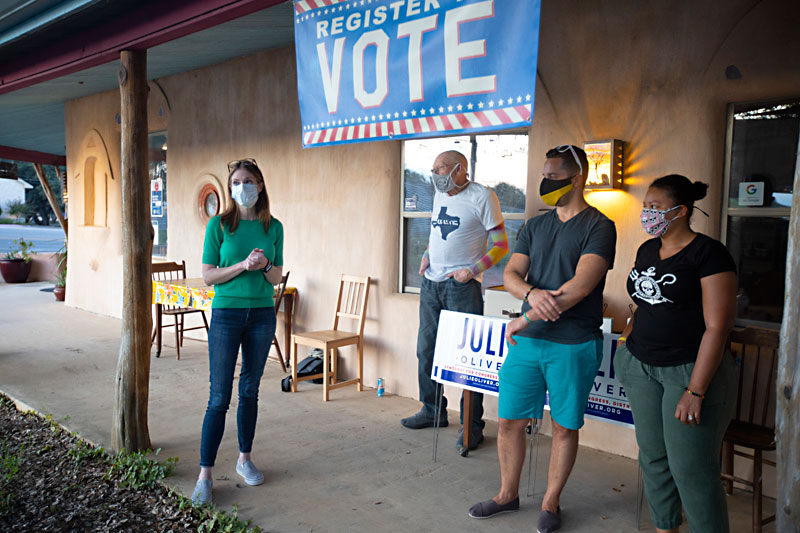 Back in 2011, a wealthy car dealer and big-time GOP fundraiser from Weatherford named Roger Williams, who'd served as Texas secretary of state under Gov. Rick Perry, abandoned a long-shot U.S. Senate bid (for the seat later won by Ted Cruz) to run in a newly drawn, red-leaning Congres­sion­al Frankendistrict in which he did not and still doesn't live. (That's legal; he just needs to be a Texas resident.) That weird-ass district, TX-25, was technically not an open seat; it was drawn to include Rep. Lloyd Doggett's home in East Austin, so the Rs could pretend they'd created a brand-new Latinx opportunity district (the one Doggett now represents, TX-35, which stretches down to San Antonio).

Even compared to other GOP gerrymanders, TX-25 is a crazy mishmash of disparate communities of interest – Austin's East­side, but also Western Travis and Hays counties; Killeen and Fort Hood (but not the rest of Bell County); the southwest Metro­plex suburbs (Burleson, Cleburne) but none of Ft. Worth itself; and the rural communities in between, from Marble Falls to Hillsboro and Stephenville. The first three times he ran, Williams won by at least 20 points. Then came 2018, and Dem nominee Julie Oliver cut that margin in half, mostly by campaigning nonstop up and down the 200-mile-long district, aiming to visit every county once a week.

Oliver didn't stop then either, and her rematch with Williams (after she prevailed in the Democratic primary against Heidi Sloan) is now by most accounts a toss-up. Partly, that's because the gerrymander itself is now busted. Travis and Hays are now almost totally blue, and the Fort Hood area is trending away from the GOP, and those places have all grown faster than the rest of the district. That's even before you get to the Trumpublicans' demographic struggles with suburban women, college-­educated voters, and now the military.

But Oliver is also a really, really good candidate. Her personal narrative has become better known – a former "Medicaid mom" whose son Brack has special health needs (i.e., preexisting conditions), who became a tax attorney and health care finance expert. That story will get a boost in upcoming weeks as Oliver launches a six-figure ad buy throughout the district, focused on health care.

Oliver’s personal narrative will get a boost in upcoming weeks as she launches a six-figure ad buy throughout the district, focused on health care.

Her campaign has thus brought the policy fight to Williams in a way that is usually less fraught for incumbents. But many voters would be hard-pressed to cite anything Roger Williams has done, or even said, or perhaps even who he is. Ironically, Williams probably has higher name ID among his angry and disenfranchised Austin constituents than among the base; his biggest news of the cycle is arguably the revelation that his dealerships pocketed a bunch of COVID-19 relief money – he won't say how much – from the Paycheck Protection Program.

A couple of weeks back, Williams did have a big local media event at the Broken Spoke (not in TX-25) to tout his backing of the federal Save Our Stages Act to protect live music venues. "I think he's feeling really insecure about this election," Oliver told us at her own event – collecting masks and sanitizer for schools in the district – up at Steiner Ranch. (Later that day, she'd do the same in Dripping Springs; the next day, up in Burleson.) "He's been able to go seven and a half years without doing anything; instead of serving the people in this district, he's been serving himself. And he's trying to play catch-up now."

In contrast, Oliver says her campaign has seen "just a sustained level of engagement, ever since our primary. It's different even than it was two years ago, when people were just getting activated and starting to feel hope for this amazing state called Texas." The people she meets want to talk about jobs, and health care, and COVID-19, and veterans' issues, and Texas becoming a leader in green energy, all of which she has plans to address as quickly as possible – before it's time to redistrict again. "We just want to do everything we possibly can with this incredible opportunity," she said.