So You Want to Redistrict Austin? 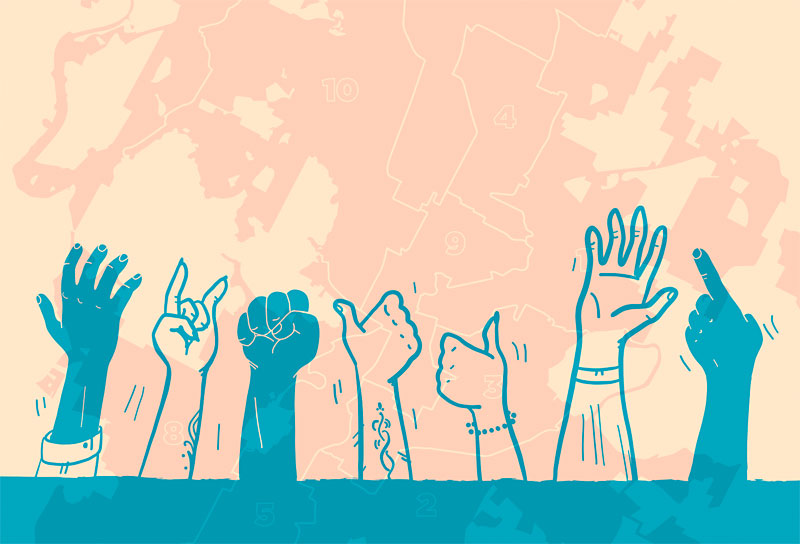 Maria Solis didn't want to be a member of the commission that drew Austin's first single-­member Council districts. "I said, 'No, I don't have time. I'm just too busy.'"

And she definitely was busy. An active volunteer her whole life, Solis had always been heavily involved in her community, whether through her neighborhood association in South Austin, her daughter's school PTAs, or the Seedlings Mentor Program. It was only with some heavy persuasion from her daughter that she recognized the need for more Hispanic representation on the inaugural Independent Citizens Redistrict­ing Commission in 2013. Fulfilling that became a new civic duty. "At first I was reluctant, but once it happened, I was all in," Solis said.

With the 2020 Census nearing its completion, a new ICRC must be convened to redraw those original 10-1 lines to account for Austin's growing and changing population. That's created another chance for engaged residents like Solis to get involved. But time is running out: The RedistrictATX campaign, run out of the Office of the City Auditor, is nearing the end of its application process on Sept. 30.

The ICRC was created by the same amendment to the City Charter as the 10-1 system itself, adopted by voters in 2012. That charter language is quite detailed, specifying the multistage process for selecting members, who are required to "reflect the diversity of the City of Austin, including, but not limited to, racial, ethnic, and gender diversity." The charter also establishes the Sept. 30 deadline to throw one's name into the applicant pool, and deadlines for subsequent benchmarks in the process, leading up to the Nov. 1, 2021 deadline for adopting the final district map.

Currently, the campaign has received 274 applications, with the highest number from residents of Districts 9, 5, and 10, and the lowest numbers from Districts 2, 4, and 8. White residents make up the large majority of applicants so far, trailed by Hispanic/Latinx applicants. Other ethnic groups, including Black or African American, Amer­ican Indian or Alaskan Native, and Asian, have fewer than 30 applicants each. There are currently no Native Hawaiian or Pacific Islander applicants. (Detailed demographic breakdowns of the applicant pool to date, including age, gender, and education, are listed on the RedistrictATX website.)

That is to say, the same reason that Solis applied in 2013 – the need to ensure equitable representation on the body drawing the district lines – is just as relevant today. Backers of 10-1 envisioned a system that would not only accommodate Austin’s huge and sustained population growth as a city, but also to rectify the Council’s longtime underrepresentation of marginalized communities.

How Does it Work?

Austin's former at-large Council system dated back to the 1950s; it was expanded from five to seven members in the early Seventies, with the extra two seats informally but effectively reserved for a Black and a Latinx member under a "gentlemen's agreement." Single-member council districts were rejected by Austin voters five times before the overwhelming approval of the 10-1 ballot initiative in 2012. Backers of 10-1 envisioned a system that would not only accommodate Austin's sustained population growth, but also to rectify the Coun­cil's longtime underrepresentation of marginalized communities, particularly in East and Southeast Austin, and overrepresentation of the whiter, more affluent Central and West Austin neighborhoods.

"Austin was one of the largest cities in the U.S. that still did not have single-member districts," said Stephanie Swanson of the League of Women Voters of Texas, which was involved in the original push for single-­member districts. "At-large districts do not really promote the opportunity for underrepresented communities to elect a candidate of their choice."

The Office of the City Auditor is tasked by the city charter with organizing the application process for both the ICRC itself and the three-member Applicant Review Panel, which narrows down the ICRC applicant pool to the 60 most qualified. Each council member has the option to strike one of these from the pool. The OCA, at a public meeting, then draws eight of the remaining applicants at random. Those eight then review the applicant pool and choose six more, prioritizing diverse representation in factors such as race, culture, class, geography, age, etc.

"We are the only city in Texas and one of the few cities in the country," City Auditor Corrie Stokes said, "with this kind of independent process. In other cities, the council appoints the commission that redraws the boundaries for their districts, so this is definitely a more objective process." The ICRC's final plan cannot be rejected or amended by Council, and the charter gives the commission sole legal standing to defend its work in court. Commissioners must have been registered to vote in Austin for at least five consecutive years, have voted in at least three of the last five city of Austin general elections, and not have any conflicts of interest, including having been a paid employee or contractor for the city of Austin (or the spouse of one) in the last three years. People who have held, sought, or worked on campaigns for elective office (including for political parties) in the last five years; who are registered lobbyists at either the city or the state; or who have bundled $1,000 or more in Council campaign contributions are likewise ineligible. Once chosen, commissioners are charged with hosting a number of public meetings, including one in each district; reviewing input from the public, including suggested maps and proposals; and drafting and finalizing boundaries. The 14 members are themselves banned from city contracts or employment for three years, and from running for Council themselves for 10 years.

Both the charter and the federal Voting Rights Act require the ICRC to aim to create or maintain "opportunity districts," in which cultural groups (i.e., Black or Latinx under the VRA) can elect their preferred candidates. Right now there are four opportunity districts; when they were drawn in 2013, Districts 2, 3, and 4 were majority Latinx, and District 1 was drawn to maximize its Black population. "The concept," Stokes said, "is that you take a cultural group and you try to make a [district] where they can be represented. It means [their representative] is representing the views and the culture of that community."

Swanson adds that the goal for commissioners is "to create districts that really reflect what the communities look like. You want to keep the communities and neighborhoods together, so they can get together to advocate for shared needs."

Representation really does matter when one looks at the biggest issues facing City Hall this year. The ongoing battle over revising the city's Land Development Code has created a Council split along geographic lines, with the members representing opportunity districts and those farthest from Downtown on one side, and the Cen­tral and West Austinites on the other. The Council's been more united on other issues, most notably its moves to reallocate police funding and reimagine public safety. But that issue, as well as the city's response to the COVID-19 pandemic and its disparate impact on communities of color, definitely require the sustained involvement of the full diversity of Austinites.

The pandemic adds another layer of difficulty to the redistricting process in terms of engagement, participation, and accessibility. The ICRC's work will be informed by the information collected in the 2020 Census. Possible lower participation this year in the Census could skew the information used by commissioners to draw the new districts, especially for already underrepresented groups (racial and ethnic minorities, undocumented immigrants, people earning lower incomes, people experiencing homelessness) whom the Census Bureau already defines as "hard to count."

The same impacts of COVID-19 on participation have plagued RedistrictATX campaign, which has had to shift to all-virtual outreach, from community Zoom meetings to a campaign podcast. When the application process first opened for both the Appli­cant Review Panel and the ICRC, there was a lack of diversity in those applying at first. "We noticed this time around," Stokes said, "that around 70 percent of our applicants were male, and 70 percent of our applicants were white. We started doing more targeted outreach. It's moving slowly but each week those numbers start balancing out a little more."

The OCA's more targeted outreach included presentations to some of Austin's different quality of life commissions and community groups such as HABLA (His­pan­ic Advocates Business Leaders of Aus­tin) Platica. "There is some concern that we may lose a number of minority representatives that we have on the council," Paul Saldaña of HABLA Platica said. "That goes to the reality that displacement and gentrification has pushed out a lot of our residents into the suburbs like Kyle, Del Valle, Manor, Pfluger­ville. We need to ensure we have folks on this commission who will be able to speak to those concerns."

João Paulo Connolly of the Austin Justice Coalition discussed how Austin's history of exclusion – from the infamous 1928 City Plan to concentrate Black Austinites on the Eastside, to decades of redlining, to latter-­day gentrification – contributes to issues with underrepresentation and spatial injustice. "We have to remember there has been a pattern of displacement," Connolly said, "and Austin has lost a significant part of its Black community and some of its Latino community, pushed out farther into the suburbs now. [We have] an urban-sprawl segregation where the sprawl keeps pushing people farther and farther away from goods and amenities that they need to make their lives better."

It's unclear what the 2020 Census will show us about how Austin has changed since the original ICRC did its work. But Maria Solis' observation remains correct: It is a lot of work to ensure a representative, equitable Council.

"It does take a lot of time and effort," Solis said, "but anybody who can do it, do this for the community. Because they need input of all different kinds. Each one of us from different parts of town, from different ethnic groups, bring something to the commission that can make Austin a more diverse city."

To apply to be a redistricting commissioner, visit RedistrictATX.org to check your eligibility and submit your application.