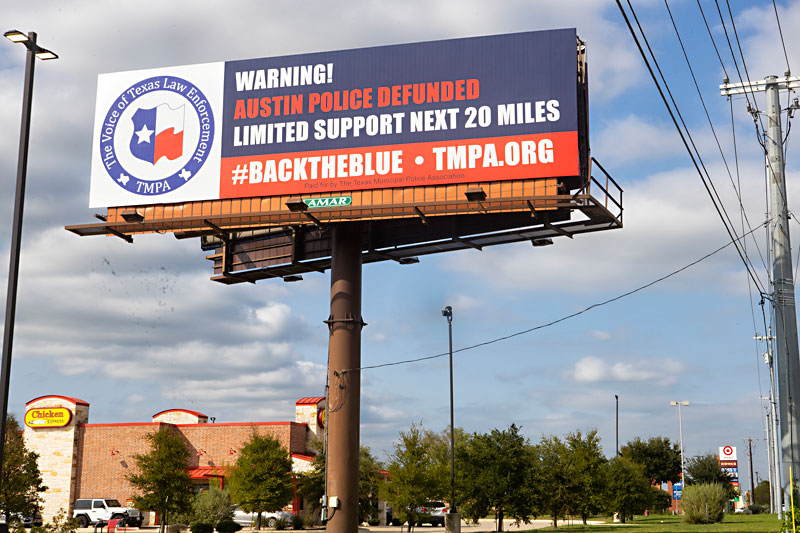 “Enter at Your Own Risk!”: In response to City Council’s vote to immediately cut the APD budget by $20 million and transition $130 million in services away from police oversight, the Texas Municipal Police Association – which dubs itself the “Voice of Texas Law Enforcement” – erected two billboards along I-35 as one enters Austin. (Photo by Jana Birchum)

Meet Your Council Candidates: The city and the League of Women Voters Austin Area will host virtual forums to hear from City Council candidates over the next few weeks. Suggest forum questions by emailing forum@lwvaustin.org or calling 512/451-6710. Schedule at www.austintexas.gov/candidateforums.

More Survivors Sue: Another class action lawsuit has been filed against Austin and Travis County law enforcement, alleging the mishandling of sexual assault cases. The plaintiffs – four sexual assault survivors who were not plaintiffs in the similar federal suit now on appeal – accuse APD and the D.A.'s Office of continued violation of the 14th Amendment's Equal Protection Clause. See "City Council Mulls Future Events, as Venues Cry for Help Now."

What Starts Here: There are three COVID-19 clusters, with a collective 100 cases, in West Campus, said UT-Austin last week. Days after the announcement, 95 students tested positive for the coronavirus ahead of the Sept. 12 Longhorn football game. At press time, UT's COVID-19 dashboard shows over 500 new cases since the start of the fall semester.

Bigots Be Bigoting: The State Board of Education rejected amendments to its sex education curriculum that would have taught kids that everyone deserves to be treated with dignity and respect regardless of sexual orientation and gender identity. SBOE is expected to take its final vote on overhauling Texas' sex ed standards in November.

"We heard over and over again in testimony about what [LGBTQIA students'] experiences were, and for us to neglect that because we're uncomfortable is irresponsible."

– State Board of Education member Marisa B. Pérez-Díaz. See "Qmmunity" for more.