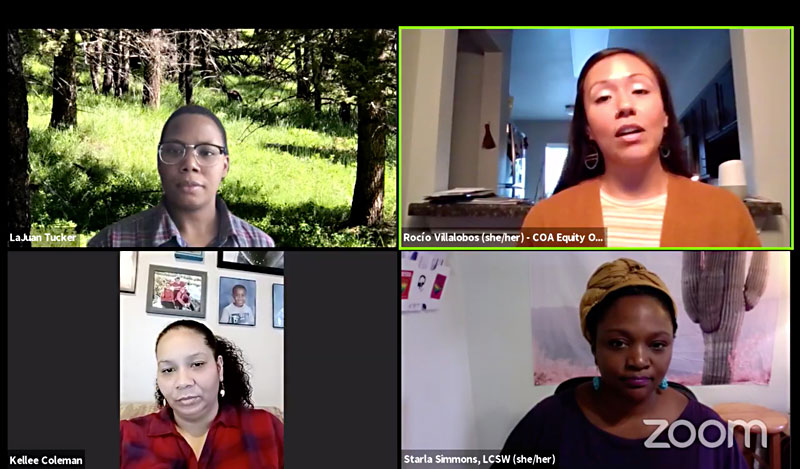 "Parks for All: Promoting Equity in Austin's Parks" panelists

Villalobos opened by acknowledging that Austinites live on Indigenous Tonkawa and Coahuiltecan land, then asked the panelists about the work that Aus­tin's leadership needs to do to dismantle racism in public spaces. Access to natural resources, tree canopy, and green space are disproportionately lacking for people of color. "There are systems in place that keep people out of these opportunities and a culture around the outdoors that we have to change," said Tucker.

One of these barriers is city institutions not holding themselves accountable to communities. "Everybody always runs to our community to try to fix us," said Coleman. "I feel like we're one of the only places where people can do that and don't get a lot of questions asked of them." City departments are responsible for discerning who has the resources to communicate their thoughts on land use, and as Tucker explained, "Every voice doesn't have the same access to the same ears." Simmons added that the conversation around parks needs to change to include more awareness of the history of the land and communities: "We're healing at the root and honoring what's really happened, not putting this Band-Aid of like, 'Nature's pretty, you can go on a walk.'"

The discussion ended with acknowledgment of Austin's progressive identity crisis, laid bare by a summer of protest against systemic and structural racism: "The main thing is going to be what do you do after the protests have stopped," said Tucker. "Not just how do we make performative statements, how do we hire a couple of folks that make us look more inclusive. ... We need to do some critical soul-searching to figure out if we're actually trying to undo racism or if we're just trying to perform in order to be in the latest conversation."