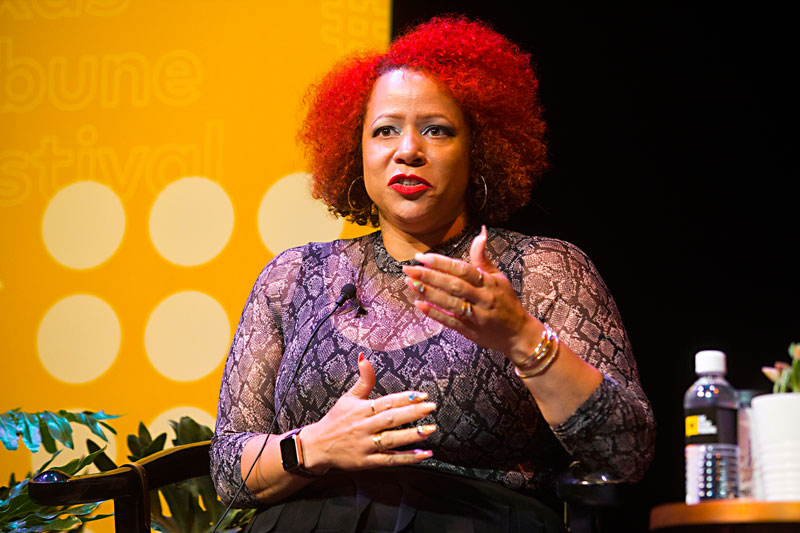 On Tuesday, Sept. 14, Pulitzer Prize-winning journalist Nikole Hannah-Jones of The New York Times joined the 2020 virtual Texas Tribune Fest­ival to talk with fellow Pulitzer winner Wesley Lowery about the impact of the Times' 1619 Project, including criticism from President Donald Trump.

First published last year to mark the 400th anniversary of the first African slaves arriving in the American colonies, the project seeks not only to center Black Americans in history but to show slavery's lasting impacts upon our world today. As Hannah-Jones put it, "Actually, slavery is as foundational to this country as freedom." The ongoing project of essays, podcast episodes, curriculum, and more draws connections between the legacy of slavery and modern American life. "The most common thing Black people hear when we talk about slavery," Hannah-Jones said, "is 'That was a long time ago; just get over it.' To produce a project that says it is impacting us everyday in America, you know you will get pushback."

She has received pushback. After instructing federal agencies to end anti-racism trainings involving critical race theory, Trump threatened to pull funding from schools using the 1619 Project. While Hannah-Jones has addressed a few questions of historical accuracy, such as the role slavery played in the Amer­i­can Revolution, she rebukes criticisms that her work is divisive or overly cynical. "The way we've been taught to deal with that inherent hypocrisy of slavery," she said, "has been to treat [slavery] as marginal, as an aside, as an asterisk to history. Really what they're uncomfortable [about] is popularizing the story of slavery and centering Black people in the story on America."

Despite the presidential criticism, Hannah-Jones is satisfied that, though they may never read the project, now "even Trump supporters know the year 1619 ... that has been treated as an obscure date that most Americans never learn. Ultimately, I wanted us to force an acknowledgement of the presence of slavery as early as 1619."

Lowery moved on to discuss the role journalism plays in current conversations about systemic racism, both in historically contextualizing issues, and in excavating the industry's own issues. Hannah-Jones agreed that it's not enough to diversify newsrooms (though she admits, that in itself is an important and still unrecognized goal) but to allow journalists of color to do their job once in those positions. "A news organization can publish coverage and it can be good," Lowery said, "but can still make the work so miserable for the Black [journalists] trying to do it that it ends up not being worth it."

"Our ability to cover race well is not just because [we're] Black," Hannah-Jones said. "It's because we've studied it, we've researched it. But our expertise is considered bias."

Watch the event on demand as part of the 2020 virtual Texas Tribune festival; see ttf20.sched.com.