The Forces Drawing ACC Students Back to Campus Despite Pandemic Uncertainty

“We’re trying to juggle it all” 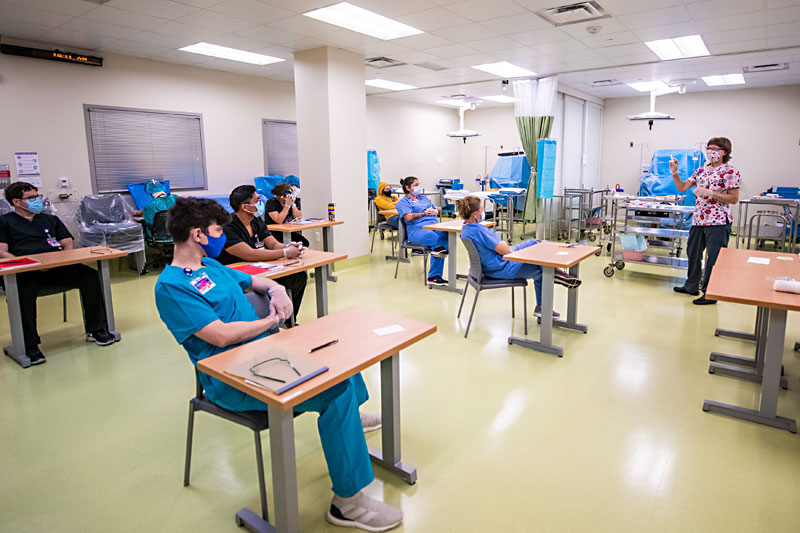 Sometimes, Jessica Paul's car is her classroom. Paul spends a lot of time driving between an Austin hospital, where she works full time as a primary care technician; her home, where she cares for her children; and Austin Community College's Round Rock campus, where she dons a mask and scrubs to study surgical tools and sterilization.

It's never easy to juggle kids and class and work, although Paul is very good at the juggling. She just has trouble fitting in a recorded lecture that's required listening for her surgical tech class. Sometimes she listens at home, if someone else is free to watch her son; sometimes she listens at work, if there's downtime. Otherwise, she sits in traffic, turns up her phone volume, and tries to remember her questions until she has the chance to email them to her professor.

Even so, Paul is excited to take the course. She was the last student off a waitlist to get a coveted seat at one of the seven sanitized, socially distanced desks in ACC's surgical technology lab class. (The class typically holds 15 students; masked and gloved mannequins occupy some of the vacant desks, facing the wall at 6-foot intervals.)

Because of the pandemic, the program is now unusually full. No students were certified in the spring because the hands-on hospital exams, or clinicals, were shut down and have just now started back up. Paul wasn't dismayed.

"Why wait? Things could always get worse, so it's best to just go ahead and do it now and get it over with," Paul said. "I want to be able to do this so I can secure a financial future, so I can provide for my kids."

Paul is not alone. Many ACC students are drawn in by the promise of a financial future, including some impacted by COVID-caused layoffs. ACC cites this local unemployment as the reason for a recent tuition drop – 50% off 12 career training programs if you enroll this semester and start classes by October. (This includes several health science programs, although not surgical tech.) Student demand for vocational training is high: I was told that more than 100 students were waitlisted for welding courses, one of the 12 career training programs, before the discounted tuition was even announced. The numbers will likely increase.

"Cutting tuition for the most in-demand fast-track programs helps not only those who lost their jobs but also local businesses," ACC Chancellor Dr. Richard Rhodes said in a press release. "Our goal is to rebuild our community and relieve some of the pressures students are facing."

Jon-Mikel Pearson also sees his time at ACC as an opportunity to switch careers – a transition he's waited for for 30 years. After years working in retail, Pearson earned an associate's degree in computer science, a teenage passion of his, in 2018. He has been waiting since then to begin an ACC computer science bachelor's degree. After pandemic delays, Pearson, who also works as an ACC teacher at night, began the entirely online program this fall and believes there's a "really, really, really good chance" that he will be the program's first graduate.

Pearson plans to pursue a master's degree after graduating, and then to return to ACC as a computer science instructor. The pandemic classes and the distant degree, he says, are leading him toward "an opportunity for me to give back."

The opportunity was hard won. Although students are glad to be back, the return to school has not been easy. Teachers who had never uploaded a syllabus or recorded a video were asked to become experts at discussion boards and video chats.

It's been a difficult transition for Kathleen Cook, who chairs ACC Round Rock's surgical tech department. Cook is used to lecturing in person and spent the summer adjusting her teaching style to a digital platform.

"It was a real big learning curve to adapt all my lectures to be online," Cook said. "Before, I could put up a slide ... and show them things by just a few words on the slide. But we don't have that now."

Normally, when Cook has questions, she walks across the hall for a co-worker's advice. Those quick conversations weren't possible this summer, so Cook struggled through redesigning the PowerPoints alone.

For instructors, maintaining a 6-foot distance can seem like a Catch-22 – some closeness is necessary to train students, but stay close for too long and you risk infecting others.

The computer science department seems to have an easier time of it (they are, after all, computer scientists), but there are still snafus. For example, in Pearson's digital machine learning class, when professor Karina Hernandez asked a student to share a proof, they couldn't figure out how to show their work, and so Hernandez had to walk the class through an explanation instead.

On campus, the challenges are different. Inside the surgical technology classroom, getting to know surgical tools is more difficult when you can't get up close and personal with them. In one class I was invited to sit in on, Cook held up two needles, one imperceptibly wider than the other, and asked the class in a voice muffled by two masks and a face shield which one ought to be used on a conscious patient. Furthermore, social distancing isn't always possible. Surgical technicians can spend several hours bumping elbows with the same people in the operating room, handing the surgeon tools and monitoring patients. The same closeness is necessary in simulated surgeries and labs.

"We have to have some sort of in-person interaction with them to learn how to work in the operating room," Cook said. "Can't learn it all online. I mean, I guess you could, but I don't know how safe that would be."

In other words, maintaining a 6-foot distance in some environments is less safe than hands-on intervention. For instructors, it can seem like a Catch-22 – some closeness is necessary to train students, but stay close for too long and you risk infecting others.

Welding courses are a similar story. Although professional welding is typically an individual enterprise, teaching the skill requires hands-on demonstration, discussion, and correction. Welding department Chair Troy DeFrates has worked to limit contact, including new plexiglass shields in the welding booths to separate instructors from the students they're observing. While the shop operates at half capacity, conversations are kept distant and outdoors.

The new form of caution was apparent in the welding shop when I observed a masked student and a teacher gesturing to each other from a distance after class.

"Normally they would be much closer, but he's reminding himself: Keep a distance, don't stay there for too long," DeFrates told me. "That goes with welding, too, man – we're always reminding ourselves about safety. You can't let your guard down for a minute with welding or you're getting burned."

The precautions, however awkward, seem a small price to pay for on-campus learning. When ACC closed its campuses in the spring, DeFrates' students studied welding theory virtually for two months. It's no surprise then that he and the students are elated to be back.

In the surgical tech lab, there's a similar air of uncertain excitement. Although Cook harbors a fear that campus will shut down, leaving in the lurch the students taking their clinicals, she's grateful to be on campus for now. And Paul sees her children's futures in the meticulously sanitized notes she takes at her desk and in the car. DeFrates says that's the most important thing about campus being open.

"People come in here and they've been working behind a desk for a long time and they want to do something different," DeFrates said. "They weld for the first time and it's life-changing for them. They know that they're going to do this for the rest of their lives. And if that didn't happen, I think it'd be pretty sad."