Out of Work and Stretched Thin, Hospitality Workers Share What Resources They Can

In a national day of action, Austin’s Restaurant Organizing Project and other activist groups highlight the service industry’s unique plight 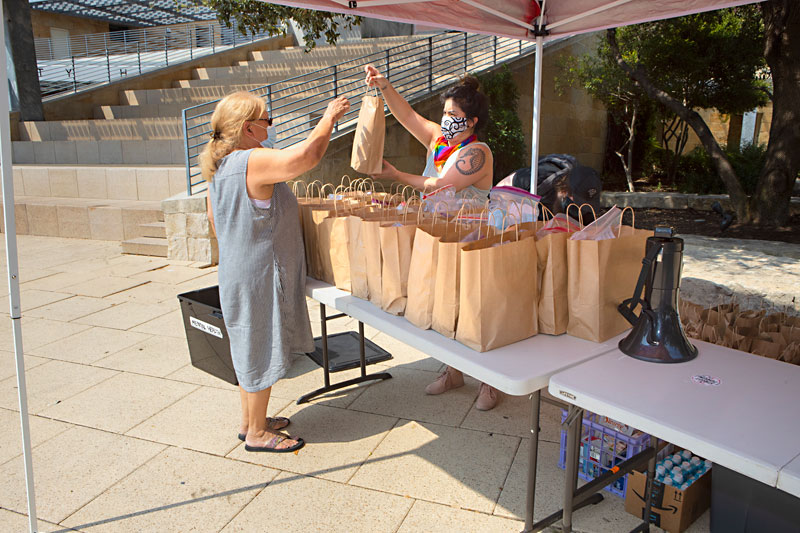 Groceries were handed out at the Sept. 1 community food bank pop-up and rally at Austin City Hall. (Photo by Jana Birchum)

A quarter to three in the afternoon on Tuesday, Sept. 1, rent day for most, the south wind takes pity on the organizers of the community food distribution pop-up and rally for the unemployed taking place at Austin City Hall. Held in conjunction with Dallas, Houston, New Orleans, and nearly two dozen other cities across the nation, the event is meant to raise awareness of the struggle of unemployed hospitality workers – especially after the CARES Act $600 unemployment benefit expired on July 31 – and provide groceries to those who need some help getting by.

Restaurant Workers United and UNITE HERE! Local 23, a national hospitality worker rights group and union, connected with the local Restaurant Organizing Project (ROP), the Austin chapter of the Democratic Socialists of America, to help stage actions, events, and rallies of this sort. Activist and organizer Gina Dvorak of the ROP explains the timing was intentional: "[People are] going to have to choose between paying their rent or feeding their families, so we are here to represent that need and show our senators that we need more support."

Dvorak is a furloughed restaurant worker, one of thousands here in Austin, a city whose workforce is around 25% hospitality-driven on average, pre-pandemic, according to the Austin Chamber of Commerce's 2019 numbers.

Nearby, Stephanie Harrison, a still employed restaurant worker, hosts a voter registration booth. She and another volunteer hand out leaflets that direct individuals to nonpartisan educational resources.

Harrison says, "We get so busy in our daily lives and we forget sometimes the greater picture. And obviously what's going on in the world right now has affected us extremely, and we need to really get out there and vote so that the people that we vote in have our best interests in mind."

Crystal Maher, another activist and organizer who's been furloughed, says this is the third event the ROP has helped organize or participate in. The first was a rally that began in front of Senator John Cornyn's office followed by a march up South Congress to bring attention to the loss of the extra unemployment benefits.

"The second action was a tomb in front of John Cornyn's office," says Maher. "That was the tomb of the unemployed worker because this was right when they [Congress] went on a vacation."

Dvorak says the goal of the Sept. 1 rally was to feed about 150 families – almost 200 bags of nonperishable food were prepared for distribution – though the turnout was less than expected, and some protest signs sat seemingly unused. Only a portion of the food was given away to people experiencing homelessness. (Maher says all remaining food was donated to Capital Area Food Bank and Hurricane Laura Relief through Wheatsville Food Co-op.) While this may not have been the original intention, organizers counted it a win to provide assistance to any individuals who are food insecure. "It's definitely for everyone because the government is failing them too," says Maher.