Council approves phase 1 of project that could store 60,000 acre-feet of water underground by 2040 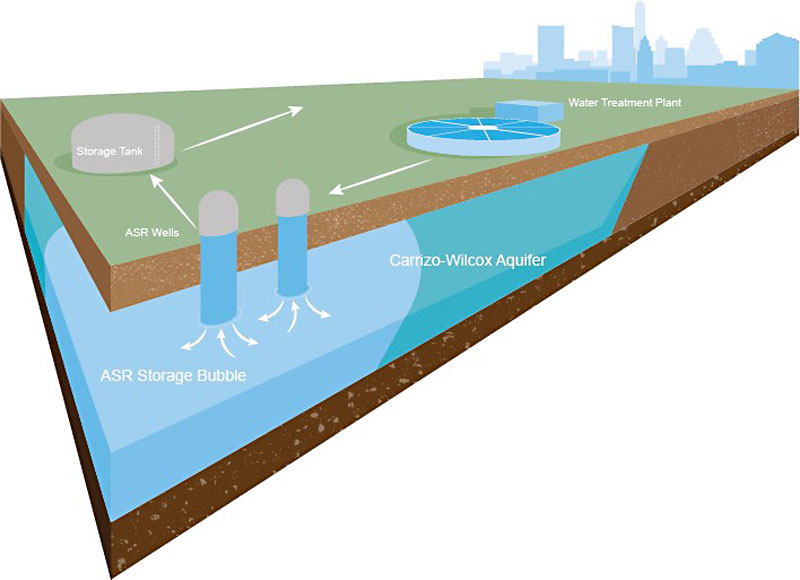 ASR allows water to be stored in an aquifer so that it can be withdrawn when needed. (Image via Austin Water)

On Aug. 27, City Council approved Austin Water's contract with an engineering firm to set into motion Phase 1 of an Aquifer Storage and Recovery project that would hold 60,000 acre-feet of water underground by 2040.

Currently, Austin gets its water from the Colorado River and the Highland Lakes. With the ASR project, already treated water captured in times of surplus, as during flooding, would be stored in an aquifer, ready to be withdrawn in the event of a drought or other climate emergency. In addition to meeting increased water demand as Austin continues to grow, the technique could also prevent shortages during times of water quality issues, such as the zebra mussel debacle in 2019 (when mollusks clogged the pipes, creating a foul stench) or the boil-water notice in 2018 (when silt from flooding overwhelmed filtration capabilities). "That would be an area where we could simply turn off the offending water plant and rely on stored, previously treated water in an ASR facility," said Kevin Crit­en­don, assistant director of Environmental, Planning, and Development Services at Austin Water.

Projected to be usable by 2040, the ASR is currently in its pilot stage. The first step is identifying an aquifer to use, with Trinity, Edwards, and Carrizo-Wilcox all being possible contenders. The engineering firm will then conduct field tests to make sure the ASR system is geologically compatible with the aquifer; if it's not, they'll move to a different aquifer. There are two main concerns when it comes to identifying the right site, says Critendon, with one being that the water will migrate while underground. For example, the Edwards Aquifer's porousness means stored water could quickly move from its original site. Another concern is the water becoming contaminated by groundwater. Crit­endon explained, "If we put treated surface water in the ground, we want to make sure, as it mixes with groundwater or comes into contact with existing geology, that we have a good idea of what the water quality impacts would be when we bring it back out."

Though this type of water storage is new to Austin, other parts of Texas and other states have implemented successful ASRs; the technical advisory group providing counsel to Austin Water includes water staff from Kerr­ville, San Antonio, and Florida. "We've also got some folks from academia and some regulators. We're using that information to think through some of the challenges we may face and benefit from some of the learning they did, particularly in the formative stages," said Critendon.

The ASR is part of Austin's Water For­ward Plan, a comprehensive water management strategy approved by Council in 2018 that spans 100 years. Water Forward includes other conservation measures, such as rainwater capturing, reuse, and changes to industrial conservation ordinances, but ASR is by far the most technically complex. Critendon characterizes it as an adaptive plan, subject to change with Austin's growth and with the climate: "In the next couple of years we'll be back to the drawing board and updating our Water Forward Plan based on what we've learned, what we've been able to achieve, and based on what we may be seeing from new climate science."