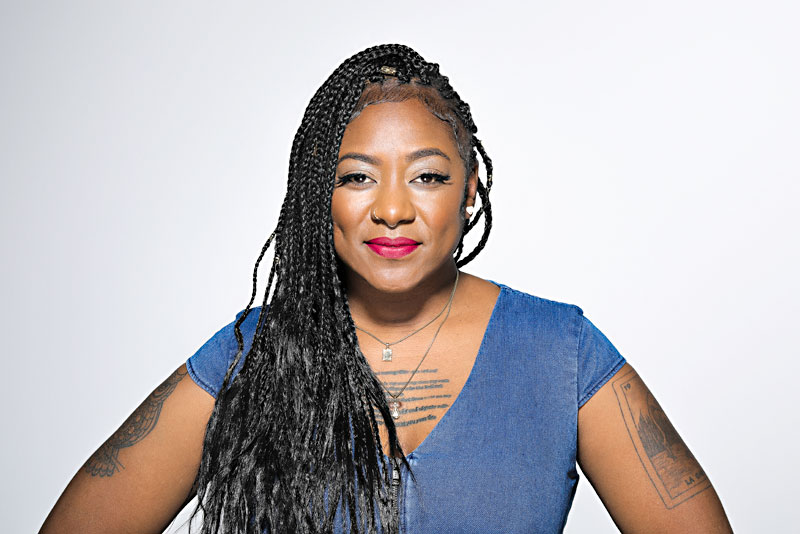 In a one-on-one conversation released Friday, Sept. 4, as part of the 2020 virtual Texas Tribune Festival, justice activist Alicia Garza, original co-founder of Black Lives Mat­ter, joined Josie Duffy Rice of The Appeal to discuss how BLM is driving efforts to reimagine public safety, both on the local level and in Congress with the proposed BREATHE Act.

Since its 2015 inception when, as Rice notes, just "saying Black Lives Matter was a political death sentence," Garza says the movement has expanded to offer concrete solutions not only to police brutality but in health care, housing, and education. She highlighted the BREATHE Act as one such concrete solution, for "divesting from the punishment economy and investing in a caring economy." Introduced by Reps. Rashida Tlaib (D-Mich.) and Ayanna Pressley (D-Mass.), the BREATHE Act proposes four measures: divesting from incarceration and policing, investing in new approaches to community safety, allocating money to community infrastructures, and holding officials accountable.

"It is," Garza said, "this generation's version of the Civil Rights Act. The last period of civil rights was about rebuilding infrastructure in our communities so that we can be powerful in every aspect of our lives. The BREATHE Act asks us to reconsider what we're prioritizing in terms of how we're distributing our resources and the impact of that in our communities."

On the specific question of defunding the police, Garza cited the growing number of recordings and videos of police brutalizing Black people, such as police shooting victims Breonna Taylor in Kentucky and Jacob Blake in Wisconsin. Even if they survive as Blake has, she noted, the cost is high. "Do you feel safer knowing [Blake] was shot in his back seven times and he lost functioning from the waist down? Do you feel safer that an essential worker [Taylor, a medical technician] was murdered in her home in her bed while she was sleeping? If this is public safety, we have to ask ourselves: What about this process and pattern and practice is actually making us safer?"

Garza is also co-founder of the Black Futures Lab, which seeks to mobilize and politically empower Black voters year-round. Rice describes the organization as "one of those places that reminds us that we're still moving forward, and we're moving forward with people who are invested in making our communities better. People think of the federal government as having all the power and local and state governments having what's left, but what we actually know is that most of the decisions that determine our future are functionally made locally."

Garza added, "Frankly some of the most profound changes in this country have come from regular people who were sick and tired of being sick and tired. What we are doing at the Black Futures Lab is organizing [them] to help lead us in the process of changing rules that have been rigged against our communities for generations."

Garza’s TribFest session is free to the public and can be viewed on demand throughout the monthlong festival. See ttf20.sched.com for the full schedule.