Turning Up to Talk About Low Voter Turnout

Get Out the Vote campaigns kick into high gear 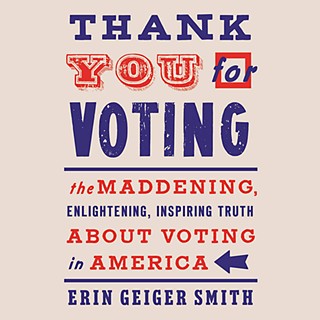 You've heard it before: America in general, and Texas in particular, has a voting problem. National turnout figures fluctuate, but two thirds of voting-age folks or fewer decided recent presidential races; in Texas it's been less than half that group. Turnout for non-presidential races is even lower, usually by a lot.

Erin Geiger Smith wants to see that change. The author of Thank You for Voting: The Maddening, Enlightening, Inspiring Truth About Voting in America has thought a lot about why turnout is low and what we can do about it. Smith hopes to convince more people, especially young people, that voting is both doable and worth the effort. And she wants to empower those who already vote to get more involved in spreading that habit to others.

Last week, the native Texan, who studied journalism and law at UT-Austin, shared her insights at a virtual event hosted by the university's LBJ School of Public Affairs and the Annette Strauss Institute for Civic Life. The talk was the latest in a series – called "In the Arena" – launched by the LBJ School in response to COVID-19. The virtual series, which is free and available to the public, has tackled more than a dozen topics ranging from the health and economic complexities of the pandemic to institutional racism, policing, and election security. The event aired as passions are high among many looking toward November, even while safety concerns over the coronavirus threaten to dampen turnout. In response to the latter, Smith highlighted the importance of planning, being prepared, and connecting with your own community around voting. Know your local laws, options, and deadlines (e.g., Are you registered? Can you vote by mail? Can you vote early?). Make a voting plan. Buddy up with friends, co-workers, or family members (online or in-person) to create mutual support around voting.

The pandemic has also raised the profile of state and local officials, who have played a crucial role in responding to COVID-19. Smith hopes this will help voters embrace the importance of voting in all elections, not just the presidential ones that happen every four years. "If the coronavirus has taught us anything, it's that local leaders have an enormous effect on our lives," she said. "They impact your health care. They impact your education. They make decisions that affect you way more than the president does. So you have to show up for those people, too."

One reason that some eligible voters may not vote is they don't feel candidates speak to them, Smith said. But she urged them to choose a candidate who comes closest to their ideals, even if that person seems far from perfect. "Whether you like the people or not, they make decisions that affect you," she said. (Smith's full talk can be found, along with other resources and ways to get involved, at lbj.utexas.edu/lbj-arena-voting.)

One initiative, Power the Polls, is recruiting young people to serve as poll workers; COVID has made these jobs risky for the elderly who traditionally fill them. Businesses are also stepping up. A group called Time to Vote, founded by Levi Strauss, PayPal, and Patagonia, recently announced that more than 700 companies have joined them in pledging to support employee voting. Participating companies will give workers time off and other tools to help them vote in November, the group's press release said. It hopes to be at least 1,000 strong by then.

Birds Barbershop is among those who have signed on. The Austin company's owners posted on social media last week, saying their shops will close early on November 3 so employees can vote (with pay) and challenging other employers and employees to get on board. "Workers shouldn't have to choose between earning a paycheck & voting," the post read. "Tell your boss to join. If you are the boss, you can make a real difference."