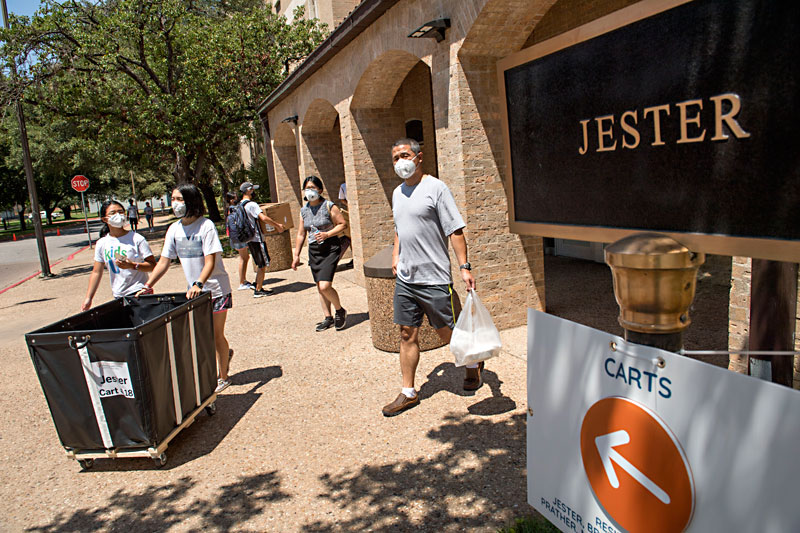 By the time you're reading this, tens of thousands of Longhorns will have wrapped their first day of classes at the University of Texas at Austin – some online, some in­ person; some in Austin; some from far away. Still, UT's COVID-19 plan for a partially open campus with mostly online courses continues to vex many in the campus community.

Last week faculty, staff, students, and alumni called on the UT System Board of Regents to make vast changes to UT-Aus­tin's reopening. In a petition presented to the regents at their virtual meeting Aug. 20, the Texas State Employees Union issued 13 demands to "protect all state workers, and particularly the most vulnerable – low-wage and frontline workers, people of color, [and] the uninsured." These include making all classes with more than 10 people remote until there is a 14-day downward trajectory in cases; halting furloughs and layoffs; reducing class sizes; and lowering tuition by 10% for the duration of the pandemic, among others. The union also asks the university to provide essential workers with $500 per week in hazard pay, and all workers with free and frequent testing and protective equipment.

"Public health experts widely agree that there is no safe way to reopen campuses this fall. University campuses and campus life inherently foster close contact, face-to-face interaction, and large crowds," states the petition. "The long-term damage of an early reopening will mean fewer and more precarious jobs, less accessibility to higher education for marginalized students, and vulnerability to privatization, not to mention prolonging an already deadly and rapidly progressing pandemic."

Anne Lewis, a lecturer in UT's Radio-Television-Film Department who also sits on the TSEU executive board, testified before the regents. Lewis told the Chronicle the union issued petitions to other university systems in Texas with similar demands, in response to what the union feels is a "lack of clarity and coherence and collective, transparent dealing with the crisis" from administrators across the state. The UT-Austin petition, Lewis said, is "definitely related" to the death of Ural Wade Sr., a custodian who died from COVID-19 earlier this summer – the first and so far the only reported COVID-related death at UT. The union was spurred to act by the dissonance between Wade's death and UT leaders identifying "student death" as a "decision trigger" for a campus shutdown. "The combination of those two ... as union people, that was like, 'Oh, we got to do something now.'"

Lewis is concerned that not enough people will volunteer for COVID-19 testing. UT's reopening plan adopts aggressive targets for proactive community testing of people without symptoms; officials have said the school aims to test 5,000 individuals per week but without making testing mandatory. That, along with a mask mandate and a ban on parties both on and off campus, isn't enough, said Lewis. "Lecturing [students] about not partying and wearing masks and washing their hands and all that is a very insufficient solution," she explained. "It jeopardizes everybody in the city. ... This is not just a question of the university community. This is a question of our city."

According to a new study released last week by UT's COVID-19 Modeling Con­sort­ium, 12,000 students are already living in Austin, with 10,000 expected to return by the first day of class Aug. 26, as this issue went to press. The study didn't assess "community amplification risks" to the whole city, but did evaluate the risk to UT students and employees from both on- and off-campus interactions. Researchers estimate that between 82 and 183 students may arrive infected during the first week of classes; if all UT students in Austin were tested that first week, between 156 and 234 would likely test positive – which could require thousands more to be tested again, depending on traceable contacts. The authors note, "Contacts between resident and returning students may exacerbate risks, fuel transmission and deplete public health resources."

UT-Austin President-designate Jay Hartzell wrote in a letter to campus earlier this week, "We will almost certainly find a larger number of COVID-19 cases and clusters than we have seen in recent weeks." He said these will mainly reflect infections developed off campus, and that UT's goal is to maintain COVID rates "that are close to, or less than," these initial weeks. Such success, he added, lies in taking personal responsibility to follow health and safety guidelines.

That emphasis on individual behavior, and thus on blame, troubles Lewis. She sees the TSEU's petition as an opportunity to foster a greater sense of shared responsibility among the campus community that would improve both health and education outcomes. "You create structures that support a collective notion of health and mental well-being, as well as physical well-being, rather than stressing everybody out with this kind of very unimaginative, 'Oh, it's personal responsibility.' ... We need a coherent and forward-thinking approach to this rather than just trying to slam the individual."