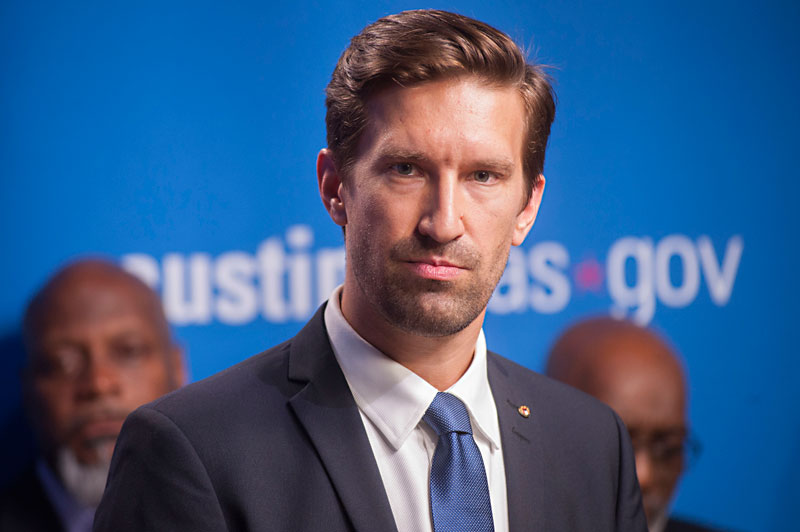 City Council meets today, Aug. 27, for the first time since they unanimously approved the fiscal year 2020-2021 budget, which immediately cut a historic $20 million from the Austin Police Department budget and set the groundwork for another $130 million in cuts throughout the coming year.

But on the agenda are 10 grants, most of which are from the Criminal Justice Divis­ion at the governor's office, that would inject just under $1.8 million of state funding into the department's budget. Some of the grants would enable functions that Coun­cil supports, such as $662,339 for victims services, $259,804 for the mental health first responders program, and $241,800 to fund a new program that would help the police department process evidence collected in sexual assault investigations.

Still, at a work session Tuesday, Aug. 25, some council members were frustrated that staff did not give more notice to CMs that they would be voting on several police grants – especially following the public outrage that followed a 7-4 Council vote on June 4 to authorize a $430,685 grant to help fund a car theft program. Following that vote, at the June 11 meeting, Council unanimously approved a resolution that included language directing staff to review all APD grants and determine if they "align with and advance Council's affirmed vision for department policies and practices."

Assistant City Manager Rey Arellano published a memo to Council on Aug. 24 explaining that, yes, according to staff the grants do affirm that vision. But Council has impressed on staff that they should be more involved in police funding questions, even through grants that sound like they help achieve Council priorities.

One of the grants, for example, would help fund "Project Safe Neighborhoods," which is supposed to reduce violent crime Downtown and along Riverside. But CM Natasha Harper-Madison argued that the "targeted enforcement" described as part of the program would just lead to more people who live in those areas being arrested.

In response, APD grants manager Kyran Fitzgerald said that department and city staff are rewriting the grant proposal to "incorporate a more forgiving type of approach to addressing crime," primarily through the creation of PSAs and community liaisons in some neighborhoods, instead of spending the grant money on officer overtime.

The grant funding is not a huge sum of money, but the lack of communication between staff and Council offices could signal to the public that they are not entirely on the same page – something CMs are desperate to avoid as they move into the nuanced work of determining what functions, along with their funding, can be decoupled from the police department. "I want us to get into a better rhythm about reviewing these types of things," CM Jimmy Flannigan told staff, "to get us and the public to see we're not taking our eye off the ball here."

But the most interesting items on the agenda will occur behind closed doors in executive session. First, city attorneys will brief Council on the status of the lawsuit that stopped the Land Development Code Revision before Council could adopt the new code through a third-reading vote. In March, Judge Jan Soifer ruled that the city had not fulfilled requirements in state law that property owners be notified of zoning changes to adjacent properties or be able to protest the changes, which would require a supermajority of nine CMs to override instead of just six CMs.

The city has appealed that ruling, but while awaiting a judgment, some at City Hall are exploring ways to change the code to allow for more housing without engaging in a comprehensive rewrite. One example would be changing the regulations of an existing zoning category (say, SF-3) to reduce the minimum lot size or to allow for an accessory dwelling unit in all cases. In a motion to clarify submitted to Soifer, the city's lawyers sought clarification on whether or not that type of LDC change could proceed under state law, but Soifer dismissed the motion because the case is now before the court of appeals.

Several CMs have told the Chronicle that they are unwilling to restart large-scale changes to the code – whether that's through another attempt at replacing the current LDC or through less comprehensive changes – until the appeals court weighs in. No one wants to spend another 10 months or more working toward a revised code only to have another lawsuit derail the effort inches away from the finish line.

In other business, the calls to replace APD Chief Brian Manley had somewhat simmered down as Council barreled through budget adoption, but now that they have cleared that hurdle, attention has turned once again to police department leadership – even if indirectly.

Council will continue a discussion that began in executive session Tuesday on the "employment, duties, and evaluation" of City Manager Spencer Cronk. Pressure has mounted for Cronk to replace Manley, because under the city charter, only Cronk can make that kind of personnel decision. But the longer he waits to make that move in the face of a Council that declared unanimously that they have "no confidence" in the current chief, that pressure is likely to focus on calls for Council to replace Cronk with someone who will replace Manley.

While unable to divulge specifics of the closed-door discussion, CM Greg Casar told us it was a "hard" discussion with Cronk. "Council is really united in wanting to make changing policing a priority from top to bottom in the city." He added, "We've all been focused on the budget, so it was important to get together and talk about the city manager's leadership."